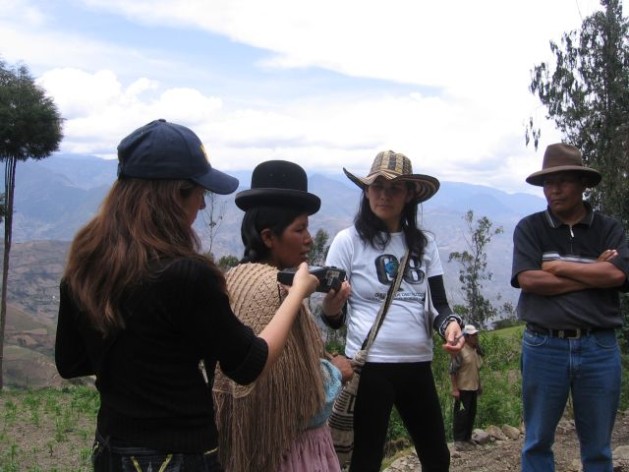 LA PAZ, Dec 1 2008 (IPS) - Indigenous journalism would seem to be in a stage similar to what environmentalism experienced a few decades ago: born of necessity and protest, it is caught in a constant state of tension between activism and professionalism.

The problem is that “we are sources and media at the same time,” said Silsa Arias, head of communications for the National Indigenous Organisation of Colombia (ONIC), in last week’s discussion in La Paz on how to carry out the work of production, research, writing and editing at a workshop titled “Journalistic Minga: Developing Indigenous Reporting in Latin America”.

Arias, a member of the Kankuamo community, is a leader of the indigenous movement in her country. But she also studied journalism, and is responsible for the news reports that appear on the ONIC web site and their on-line radio station Dachibedea (Our Voice).

Her concern was echoed by other participants in the Nov. 25-26 workshop sponsored by the International Fund for Agricultural Development (IFAD) and organised by the Inter Press Service (IPS) global news agency.

Taking part in the workshop were indigenous people from Bolivia, Colombia, Ecuador, Guatemala, Peru and Venezuela who have taken on the task of informing, educating or protesting, through community radio stations, alternative or local media outlets, and social movements.

Two reporters from Nicaragua were unable to attend the workshop. One was in the hospital with malaria, and the other was unable to convince the airline that he did not need a visa to travel to Bolivia.

Their cases illustrate the kind of hurdles that have cropped up at every step since IPS assigned me the task of identifying colleagues in the region dedicated to indigenous issues, providing training and assistance for each of them to write a feature story, editing the article, and publishing the stories on the agency’s world news service.

In indigenous zones in Latin America, the “digital gap” is “an abyss,” said workshop participants.

Some of them only have access to email once a week or every two weeks. That is the case, for example, of Jorge Montiel, of the Wayuu community in Venezuela, who hopes to buy his own secondhand computer within a few months, as soon as he has saved up the necessary 500 to 600 dollars.

Meanwhile, the trip by river that Milton Piranga, from Colombia, wants to make to write about an Amazon jungle indigenous community that is on the verge of disappearing costs 1,500 dollars – more expensive than a plane ticket to Europe.

Piranga also belongs to a vulnerable indigenous group, the Koreguaje, who live in the southern Colombian department (province) of Caquetá and number just 3,500 people. His father, an important Koreguaje chief, was murdered by the guerrillas when Piranga was just 10 years old.

The Spanish language brought over by the conquistadors became a source of tension. Forced to learn it in order to communicate with other native groups and with the rest of society, indigenous people sometimes use it reluctantly.

It was interesting to watch the workshop participants from other countries interviewing Aymara peasant farmers in the mountains of Laripata, 300 km from La Paz.

Doña Teodora was calmly explaining in her own language how she, with the help of her neighbours, had built a terrace in 25 days to plant turnips, when an indigenous workshop participant from Colombia became impatient and quipped “Speak to me in Spanish; we can’t understand each other this way.”

In the face of her insistence, Teodora began to insert a few Spanish words into her account.

The simultaneous translation by an IFAD expert sounded overly concise, and left all of us feeling that we were missing out on things. So the interviewers decided to tape record the woman speaking in her own language, and later ask for a complete translation by IPS correspondent in Bolivia Franz Chávez, who speaks Aymara.

In Laripata, some 50 families in three villages scrape out a living while fighting erosion on their small terraced plots of land cut into steep hills, where soil and fertilisers are swept away every time it rains.

Through a programme financed by IFAD, they receive funds and technical assistance to revive traditional agricultural practices like terrace-building, which curbs erosion, and the planting of trees. They grow potatoes, corn and a few vegetables, and raise chickens. But they still suffer from chronic malnutrition.

Nevertheless, they welcomed us with a banquet: different varieties of potatoes, boiled or baked, cassava, tortillas, baked chicken and even salad, an eccentricity only served to wine and dine the visitors from afar.

While we make our way down the trail from the terraced fields to the village, Milza Hinostroza, a 23-year-old woman from Peru who has a journalism degree and works for the “El Cafetalero” radio programme, shifted from interviewer to source, when she began to talk about the conditions faced by small coffee growers in her country.

Some of the questions raised by the participants at the workshop took the shape of challenges.

“Why do we have to reflect the viewpoints of companies denounced for polluting or plundering our land, or of governments, if they already express their viewpoints in the newspaper or on TV every day? Why do we have to respect the principles of impartiality, accuracy and use of multiple sources if the big media don’t do so when they report on us?”

The response: Because a rigorously written journalistic story can reach a wider audience than a protest article, can move more people, and can get the point across and describe problems in a more compelling fashion.

In addition, journalism is a marvelous tool for providing a broad view of reality, for learning to piece together the puzzles of day-to-day problems, for making out the hidden connections between events and developments, and for highlighting nuances and contradictions.

The men and women who met last week in La Paz got involved in journalism out of necessity, motivated by the need to protest and denounce what is happening to the indigenous people of Latin America. They were grateful to be able to take part in the meeting and the discussions, and to receive some technical assistance and tools. Time will tell whether or not they make the profession their own.