POLITICS-KENYA: Taking Up a Women's Agenda

NAIROBI, Dec 2 2008 (IPS) - The first woman from the Muslim majority island constituency of East Lamu to contest for a seat in Kenyan parliament, Shakila Abdalla is determined to give voice to the country's poor and marginalised. 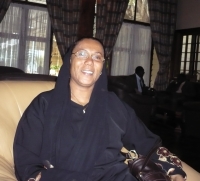 "My decision to come into politics was inspired by the persistent poverty of people in my area," Shakila Abdalla told IPS.

A woman vying for a leadership role in a culturally conservative Muslim region was unheard of. "To many people it had come as a shock," says Shakila, "But someone had to break through the glass ceiling."

Abdalla actually lost the election to a long-serving incumbent, but was subsequently nominated to Kenya's 10th parliament on the party quota of the Orange Democratic Movement of Kenya (ODM-K).

A mother of two, Abdalla had broken several conventions even before entering politics. After earning a diploma in management, Abdalla worked in the island's nascent hospitality industry as a hotel executive, one of the few Muslim women from Lamu to join the profession. "That, too, had raised many eyebrows – a Muslim girl in hotel business. But times are changing and there is nothing in my religion that stops women from either doing business or taking part in politics."

The experience of taking part in elections, canvassing, losing a bitterly fought election and then eventually becoming a member of parliament has strengthened her resolve to bring a change in attitudes in Kenyan society towards women politicians.

"Voters judge us by a different standard than they would a male candidate," Abdalla reflects. "For instance, a man's marital status hardly ever comes into consideration – we had a president (Daniel Arap Moi) who ruled Kenya for 24 years without taking a wife. But, in the case of women in electoral politics, whether they are single, divorced or widowed becomes an election issue."

Warding off gossip campaigns from political opponents was only one challenge of her election bid. "The biggest problem is the money factor in Kenyan elections. Candidates literally buy votes. Sometimes they pay more to make people not to vote. Most women candidates do not have that kind of money or are unwilling to indulge in this practice," observes Abdalla.

In August last year, the previous house rejected a bill that would have given women a 17 per cent share of seats. Even with just 22 women members – 15 of them directly elected – the 10th parliament has the highest female representation in Kenya's history.

Their limited numbers may explain the sense of solidarity among women in parliament. Setting aside party rivalries, female MPs are all gathered under the umbrella of the Kenyan Women Parliamentarians Association (KEWOPA), which focuses on women-specific legislation and advocacy with their male counterparts.

When she talked to IPS in the parliament's lounge, Abdalla was stepping out of a KEWOPA meeting with a group of 15 male members of parliament, lobbying them to support a bill to ban female genital mutilation (FGM), a widespread practice in many parts of Kenya.

"I do not merely represent the constituency I come from. I also have this obligation to push for legislation to protect women's rights across Kenya," says Abdalla. She noted that FGM is not a problem in her Lamu Muslim constituency – among Kenyan Muslims only the Somalis practice it. But it is an issue all women parliamentarians feel strongly about; they are determined to draft and push a bill in this session of the legislature to ban it.

She describes working in the male-dominated parliamentary environs as an empowering and learning experience. Rules of business and conduct, designed by men mostly for men, are not always sensitive to women's needs.

Abdalla cites an interesting example: "According to parliamentary security procedures, members of parliament could not carry handbags in the chamber. Our male counterparts were not affected by this regulation. They can carry pens, notebooks and other items in their jackets and pockets. But a handbag is an essential accessory for women which the makers of that rule did not appreciate," observes Abdalla.

Having the handbag rule changed this year has been a small victory for the women parliamentarians. Bigger, more consequential issues are on the anvil, says Abdalla, as a new constitution is being drafted. For her, land ownership for women is the key to enhancing their participation in politics and other fields of public life.

"One of the reasons why the last draft constitution put for referendum in 2005 was defeated was that it gave women the right to inherit land which the majority of men did not endorse. We have to make sure that this time women do get this right inserted in the basic law of the land."

But her heart stays in Lamu and with its people.

"Having seen them live in poor conditions since I've opened my eyes, I wanted to bring a change in their lives and the best way to do it is through parliament which provides a forum for legislation and a position of power to influence policymaking."