JINJA, Uganda, Jan 16 2009 (IPS) - Illegal trade and overfishing in Lake Victoria have led to fish scarcities in Uganda, Kenya and Tanzania. Large quantities of illegally traded unprocessed fish, especially Nile perch and tilapia, may be finding their way to export markets in the European Union (EU). 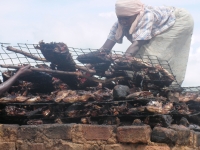 A woman roasts mugongowazi, or fish heads and bones, on the Ugandan side of Lake Victoria. Credit: Wambi Michael/IPS

The depletion of the most traded fish from the lake, the Nile perch, is also driving up prices locally, which threatens the livelihoods of close to 40 million people in East Africa.

The predatory Nile perch was introduced into Lake Victoria by British colonial officers to restock the lake in the 1950s and has since wrecked environmental havoc by killing off the indigenous species in the lake.

Uganda, Kenya and Tanzania have been exporting tons of Nile perch to Europe. Fish exports have overtaken cash crops like coffee and cotton in terms of exports earnings.

The overfishing of the Nile perch has been blamed on too many vessels on the lake and too many fishers using bad fishing methods. Uganda has over 20 fish factories exporting over 30,000 tons of fish annually, bringing in attractive foreign exchange earnings of 150 million dollars annually.

However, this has come at a price, as the massive exports have led to fish scarcity and price hikes on the local market. Over 10 factories around Lake Victoria have closed and the remaining 25 are operating below capacity, according to the Lake Victoria Fisheries Organisation (LVFO), based in Jinja, Uganda.

The LVFO was created through a convention signed by Uganda, Tanzania and Kenya under the East African Community in 1994 to manage the fishing resources in Lake Victoria.

LVFO executive secretary Dickson Nyeko told IPS that, ‘‘the number of registered fishing boats on Lake Victoria has increased by 16 percent since December 2005. The boats are travelling further, using illegal gear in an effort to satisfy the remaining fish processing factories on the lake.’’

Nyeko contended that policy makers in East Africa should consolidate and conserve fish stocks in all water bodies of the East African Community because stocks in the region are currently under threat.

Nyeko said the Nile perch stock in the region is suffering from uncontrolled fishing. ‘‘The Nile perch is a major traded fisheries commodity internationally. Its decline presents a special concern for the livelihoods of millions around the lake and the region.’’

Uganda fisheries department commissioner Wilson Mwanja said that year-on-year fish export earnings dropped by 19.4 million dollars to 117.3 million dollars in 2007. Fish exports for the financial year 2008/2009 have been projected to drop by over 60 million dollars from 2005.

The remaining fish processing factories ‘‘now operate at between 30 to 50 percent processing capacity and this is happening at a time of increased freight charges and cost of fuel’’, Mwanja said.

Already there is a food crisis marked by the increase of food prices to levels that are unaffordable to many.

In Uganda’s capital Kampala, a kilogram of Nile perch that used to cost about 0.50 dollars now costs 3.50 dollars. Many people resorted to eating fish heads and bones sold at the fish factories after the fillet had been removed for export to the EU.

But now even the fish skin, bones and head – commonly known as mugongowazi (Swahili for ‘‘open back or fleshless person’’) – are becoming scarce because traders have found new markets for these products in the Democratic Republic of Congo, Central Africa Republic and Southern Sudan.

Mugisha Kanywani, spokesperson at Gaba fish market and landing site on Lake Victoria, acknowledged that business in fish bones, skin and heads with neighbouring countries is flourishing while locals can no longer afford these products.

‘‘Talk less about mugongowazi! Even those skins, rolled, are good food for Congolese and the people in Chad. We now have the money. Don’t you see how we have built up (developed) this area?’’ he argued in an interview with IPS.

Dirisa Walusimbi Gamweru, chairperson of the Gaba beach management unit, told IPS that, ‘‘10 years ago, a fisher employing 50 nets would catch at least 100kg of Nile perch daily. Now, with the same number of nets, you can only get between 20 and 30kg.’’

Women at Gaba landing site have been surviving on fish trade as vendors. But the decrease in fish stocks is directly impacting on them. Some have resorted to selling firewood cut from the islands in Lake Victoria.

Sauda Namwanje, one of the firewood and charcoal sellers, told IPS that her operating capital could no longer sustain the fish business, so she had to change to the wood business.

The fish scarcity has taken on a regional dimension as a potential source of conflict. Fishers cross beyond state borders in search of fish. Kenyan fishers have in the past been arrested and detained in Uganda. It is estimated that over 300 Kenyan fishers cross to Uganda every day.

Patrol boats now traverse the lake as Uganda accuses Kenya and Tanzania of failure to enforce agreements relating to the sharing of the lake's resources. A report by the Lake Victoria Fisheries Research Project said various laws and agreements on the use of the lake are being disregarded.

The report said overfishing on the Kenyan side is forcing its fishers to spill over into neighbouring countries' waters. It added that, ‘‘although Kenyan territorial waters cover only six per cent of the lake, it has more boats and fishermen’’ than the other countries.

The issue was discussed by the council of ministers of the LVFO last October. The ministers of the three countries urged member states to create mechanisms for resolving fishing conflicts, to fight illegal fishing practices and to provide adequate funding for fisheries activities.

They also asked member states to gazette some areas of the lake as protected areas closed to fishing to allow the regeneration of stocks.