LA PAZ, Jan 27 2009 (IPS) - Voters in Bolivia, one of the countries with the highest concentration of land in the world, decided in Sunday’s referendum to limit the size of large landed estates, or “latifundia”, to 5,000 hectares. 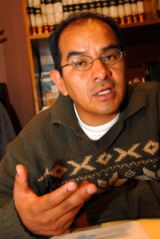 In Bolivia, South America’s poorest country, just 100 families own 25 million hectares, while two million campesinos (peasants) have access to only five million hectares, according to a report by the United Nations Development Programme (UNDP).

This extreme level of inequality in a country that is highly polarised between the western highlands, home to the indigenous majority, and the more ethnically mixed eastern lowlands, which account for most of the country’s natural gas production, industry, agribusiness and GDP, makes for an explosive cocktail when it comes to the government’s land reform plan.

In Sunday’s referendum, an estimated 60 percent of voters approved a new constitution rewritten under the left-wing government of Evo Morales. Simultaneously, 70 percent voted in favour of a 5,000-hectare limit on privately-owned rural estates. (The other option was 10,000 hectares.)

Under the agrarian reform programme and the new constitution, the authorities have the right to determine whether rural property is serving an economic and social function, or is unproductive and thus subject to expropriation – with fair compensation – and redistribution to poor families.

Land reform authorities have verified and legalised land ownership over more than 30 million hectares, and have 52 million to go, the secretary general of the National Agrarian Reform Institute (INRA), Juan de Dios Fernández, told IPS in this interview.

The mission is not an easy one, as demonstrated by the clash that occurred on the property owned by a U.S. rancher, Ronald Larsen from the state of Montana, who has lived in Bolivia for four decades and owns 6,777 hectares in the eastern province of Santa Cruz.

When INRA officials attempted to carry out an inspection of his land in November, Larsen’s employees tried to keep them off the property, even engaging in skirmishes in which shots were allegedly fired at the government vehicle.

Analysts say the land question is at the centre of the country’s political confrontation.

Fernández explained why the government is closely studying the ownership of the immense ranches in the hands of private owners.

IPS: What is leading the government to reform the country’s land laws? JUAN DE DIOS FERNÁNDEZ: This is a social demand that has been loudly voiced for the past 50 years but has never been given a definitive, structural response. What happened between 1953 and 1996 is that the state distributed 60 million hectares of land, less than 20 million of which actually went to campesinos and indigenous communities, while the rest was distributed to large landholders and agribusiness interests in the eastern part of the country.

Eighty percent of the productive land was concentrated in the hands of a small group of landowners and the rest was worked by a very large group of campesinos and indigenous communities.

For instance, we have the businessman (Osvaldo) Monasterios, who owns more than 100,000 hectares, while there are plots of 24 square metres in the province of Chuquisaca. How is that situation fixed? Rural farmers with the least land are the poorest people in the country.

IPS: What are the technical and legal mechanisms involved in achieving a fair distribution of land? JDF: By modifying the structure of rural property, by cleaning up the land register and regularising and legalising property ownership, identifying public land, expropriating land that serves no economic or social function, in the case of medium and large ranchers, and the distribution of land to landless campesinos.

IPS: Tell me about the new size definition of “latifundium” (a large landed estate with absentee ownership and labour often in a state of partial servitude), under this new system of redistributing land. JDF: I believe we are carrying out this reform with a clear vision. In the old constitution, anything over 50,000 hectares was considered a “latifundium”, although it was not clearly defined. Now, by contrast, by defining a size limit of 5,000 hectares we are marking a reference point for a specific policy.

This government’s policies respect individual, community-owned and collective property, while generating a sense of certainty and security in a scenario where the opposition has been challenging the process. They have said we are going to take away their land and distribute it to campesinos from the highlands, without leaving any land to the agribusiness sector.

IPS: What practical experience and results has INRA obtained? JDF: In August, landholdings in the northern province of Pando were inspected, and 98 percent of the land was claimed as privately owned. But when we completed the process, only 25 percent was legally recognised as such, and another 25 percent had been distributed earlier to campesinos and indigenous people. The other half was actually publicly owned nature reserves and parks.

IPS: Is there a link between inadequate distribution of land and a political elite that this government is fighting? JDF: A large part of the 40 million hectares (that went to large landholders and agribusiness interests in the eastern part of the country) was handed out in payment for political favours. By law no one could receive more than one plot of land, but there were people who received two and even three.

IPS: How long do you think it will take to reduce poverty by means of the redistribution of land? JDF: We have four more years to complete the process of clarifying land ownership. Land titles generate a sense of legal security which, in the case of community-owned property, allows access to credit, and to participating in productive processes.

You have to understand the political context in Bolivia. One thing was the (1959) Cuban revolution or the Bolivian revolution of 1952, where the structure of the state was changed by force and new institutions were built.

In that context, land can be seized because there is no Congress and (the revolutionaries) have the strength and the power. But in the scenario of a democratic revolution like the one being carried out by this government, we can’t do that.

A central pillar of a country’s institutionality is guaranteeing legal security. If you have a property that was acquired either rightfully or wrongly, and which is larger than 5,000 hectares, I can’t take it from you retroactively. That would be an attack on the owner and we would be breaking the property rules of this society.

This government is not going to do that. But the most important issue is this: the new constitution explicitly states that every two years, we are going to verify that land fulfils an economic and social function. Through this process, we will be able to recover public lands and limit unproductive latifundia.