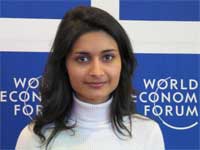 The GGG index ranks countries according to gender equality, and it is designed to measure gender-based gaps in access to resources and opportunities in individual countries rather than the overall levels of the available resources in those countries. It looks at four factors: economic participation and opportunity; educational attainment; political empowerment; and health and survival of women. And the results are surprising. Zahidi discusses concrete cases based on the data dug out for the GGG report.

IPS: You have participated in the GGG from the beginning, since 2006. Could you highlight an important trend since then?

In a backwards calculation since 2001 for 32 countries, we also see a lot of them that made an immense amount of progress, like Turkey, Japan, which have big gender gaps, but improved 7 to 10 percentage points. This can be interpreted as an actual change on the ground.

IPS: How do you explain the regression in 22 countries?

SZ: I cannot definitely say that there is something in common. The countries that have regressed include Germany (11) and Saudi Arabia (128). Those are vastly different countries.

In some countries, the percentage of women in parliament or ministerial positions can change quite fast. It is more disturbing when the economic participation and the access to health and education –which take a long time to change fall.

IPS: Mozambique (18), a low-income country, ranks number one in economic participation of women.

SZ: Basically, what we are trying to do with the report is to show gaps rather than levels of development. One possibility was to create an index that tells whether a country shows low levels of education, for example. And, really, Bangladesh (90) has lower levels of education than Sweden (3). But it is not very helpful to do this type of analysis. However, if you compare the difference in access to education between women and men, it becomes a meaningful comparison for policy makers. We look at the reasons behind the gaps and how equality resources are being accessed regardless of the overall level of resources available.

That is why Mozambique rates number one in economic participation in spite of being a low-income country. Because it performs quite strongly in terms of labour force participation.

IPS: On what factors does access to political power depend?

SZ: All countries show a low level of political empowerment for women. This is one aspect in which most perform very poorly. Even in Norway (1) only half the gap has been closed. And there is a long way to go before this gap is closed.

There are reasons why this gap should be closed. The system benefits from more diversity in policy-making.

A research authored by Esther Duflo from MIT (Massachusetts Institute of Technology) and Rohini Pande from Harvard looked into gender quotas across Indian village councils and whether leadership was predominately in the hands of women or of men. In the first case, they found out that the allocation of local budget was devoted far more to education and health, whereas when the leadership was controlled by men it was directed towards consumers products, defence, cars, which are important but not fundamentally important.

IPS: One of the surprises of the index is The Philippines, which fares extraordinarily well at number six.

SZ: The case too illustrates the point about the report examining the gaps rather than levels. The Philippines do well all around. They have lower levels of education and health for everybody. But whatever education and health available, they are equitably divided among women and men. Their economic empowerment rate ranks at number 8. They have almost closed the gap, with 77 percent economic participation for women. It is good even compared with Iceland (4), with a lower economic participation (73 percent). In terms of political empowerment, they rank fairly well too.

IPS: The report also says that "rich countries have more education and health opportunities for all members of society." Among the ones at the end of the ranking are high-income countries like Saudi Arabia and other Gulf states?

SZ: We don’t have an explanation for this. Some people, when they look at how we have broken this up, say it is so because of Islam. But I am not sure we can say that. With the lowest scores we see different countries with different incomes, religions and cultures. In the middle of the list, you have Indonesia (93), which is doing much better than Saudi Arabia (128), for example.

What we can say is that we have to learn from the countries that are doing well. I would rely on data… Kuwait (101) gave women the right to vote only three years ago. Maybe we will see a dramatic improvement in the future. China (57) is doing very well in comparison with other countries, for example. That goes contrary to the assumption that democracy has to do with the gap. We need deeper research to determine that.