LUSAKA, Mar 10 2009 (IPS) - In an attempt to mitigate rising food insecurity and malnutrition, the Zambian government and the World Food Programme (WFP) have started to hand out food vouchers to the country’s urban poor. 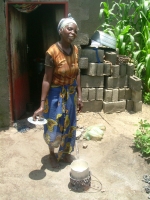 A woman preparing nshima, a thick porridge made from maize meal on a brazier in one of the townships of Lusaka. Credit: Kelvin Kachingwe/IPS

The programme was launched in February after agricultural experts forecast a shortfall in this year’s maize yields, Zambia’s staple food.

The food voucher programme will run for the next twelve months and is expected to feed 10, 000 households, mostly in and around Lusaka district.

Civil society groups are concerned, however, that the food voucher programme is merely an emergency intervention that will fail to bring long-term, sustainable change to the country’s capacity to feed its population of twelve million. Instead, they ask for direct, financial support of Zambia’s one million small-scale farmers to increase local food production.

An urban vulnerability assessment by Lusaka-based Jesuit Centre for Theological Reflection (JCTR) research institute in October 2008 revealed a harrowing food insecurity scenario for a substantial proportion of the population.

About 47 percent of Zambians suffer chronic malnutrition – which, according to the Food and Agriculture Organisation (FAO), is the tenth highest malnutrition rate in the world. In addition, food price hikes of 25 percent to 75 percent have exacerbated the situation.

"The assessment showed that a substantial increase in the cost of staple food commodities had occurred in many areas of the country. Price hikes were often a direct result of soaring fuel prices, which led to under production of food and higher consumption of staple food crops," explained WFP public relations officer Precious Mumbi.

The food voucher programme aims to alleviate this situation by providing urban poor with monthly food rations so that they have enough money to spend on education, health and basic households needs.

A recent vulnerability assessment study determined households that qualify for the vouchers, which will be handed out by community volunteers, with local city council support. Government officials hope that the monthly food rations will help urban poor to spend more money on education, health and basic households needs.

An average urban family of two adults and four children needs a purchasing power of $120 just to meet basic food and nutritional requirements, according to the JCTR. Yet, one third of urban households earn less than $100 a month.

Children have been affected the most by ongoing food insecurity. According to the 2006 Living Conditions Monitoring Survey by the Central Statistical Office (CSO), more than half of Zambian children under the age of five are stunted, while 19.7 percent are underweight and 5.9 percent are wasted.

The Department of Health has noted heightened levels of malnutrition cases in hospitals throughout the country. A November 2008 meeting of the department’s nutrition emergency task force found, for example, an unusually high level of severe, acute malnutrition admissions at the University Teaching Hospital (UTH) in Lusaka of up to 20 children per day.

The problem of malnutrition has been exacerbated by a shortage of drugs, hospital food and health care personnel to attend to sick children, a development which prompted government to launch the voucher programme as an emergency measure to quickly assist food insecure and low income households to access food.

Zambia Council for Poverty Reduction programme co-ordinator Joe Ndalasa argues that while the food voucher programme addresses the immediate food needs of the vulnerable sections of the population, what is really needed is an intervention that can secure food security in the long run.

He says by subsidising agricultural inputs, government would give smallholders the opportunity to grow crops, stabilise production and maintain a steady maize price.

"To counteract this [crisis], farmers need fertiliser and good seed," agreed Organisation for Social Development (OSD) executive director Sylvester Mbewe. "Fertiliser is expensive, and only a few farmers can access the money or credit to buy it."

"Even those who have access to only a small piece of land will provide sustenance, not just to their family but also to their neighbours," he reckoned.

Christopher Chingobe, who runs a small farm on the outskirts of Zambia’s capital Lusaka, agrees. He says he wishes the Department of Agriculture would broaden its existing fertiliser support programme that subsidises 200,000 smallholders instead of handing out food vouchers.

"The problem is that only a few farmers benefit from the fertiliser subsidy. It needs to be expanded so that we can all benefit," he explained. "If I can be provided with the fertiliser, I can produce enough food for my family and also be able to sell [surplus produce]."