ROME, Apr 28 2009 (IPS) - Puerto Rican Juan Melendez spent more than 17 years on death row in a Florida prison for a 1983 murder to which another man had repeatedly confessed – evidence prosecutors withheld. He was only released in 2002. Now a documentary by Luis Rosario Albert tells Melendez's story, the multifaceted circumstances that surrounded it and the human rights struggle in Puerto Rico that followed. 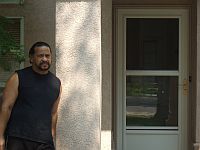 However, because of Puerto Rico's status as a Commonwealth of the U.S., it is subject to some federal laws, and the U.S. has sought the death penalty on federal charges in a number of cases, including Melendez's. This has been considered by many to be a betrayal of the island's autonomy.

In an e-mail interview, Albert says the "reasons for Juan's release do not appear to have been related in any way to Puerto Rican opposition to the death penalty, although groups such as the Puerto Rican Coalition Against the Death Penalty, and the Comision de Derechos Civiles de Puerto Rico helped promote Juan's story since his release. Juan's story has provided a very effective example for educating the people of Puerto Rico about the death penalty system."

IPS: So far, you have done documentaries illustrating Puerto Rican culture. Why this change in subject? LUIS ROSARIO ALBERT: This case struck me because after being on death row for almost 18 years for a crime he didn't commit, Juan has become a prominent member of the abolition of the death penalty movement in the U.S. The first reason was that his story needed to be documented. I remember that after watching "The Exonerated", the film by Bob Balaban, thinking why we cannot do something to help the cause of this fellow Puerto Rican.

Secondly, I have great respect for a person that after all that time in jail – he could have done other things… But he decided to fight back and help transform his reality by fighting the death penalty. He has a unique ability to tell his story in an especially captivating and dynamic way.

The extent of the injustice, and the remarkable way in which everything had to line up all at the same time in order for Juan to be exonerated is also extraordinary. Had everything not lined up perfectly, he would not be alive today.

His appellate attorney quitting and being replaced by a team of exceptional attorneys, and an investigator; his trial defence attorney becoming a judge which created a conflict of interest and required the case to be removed from the county where he was convicted; the fact that the case fell into the hands of a courageous female judge; the fortuitous rediscovery of the taped confession of the real killer 16 years after Juan had been sentenced to death – all of these factors had to come together – it is extraordinary that they did. And it is shocking to think what would have happened if they did not.

IPS: The U.S. has executed 1,158 people since 1976, and has currently more than 3,000 inmates on death row. What makes Juan Melendez's story special? LRA: I think the length of time Juan was on death row is remarkable in and of itself. Although there have been 131 death row exonerations since 1973, Juan is one of only a few death row exonerees who spent more than 17 years on death row. For a human being to survive for almost 18 years in a 9- by 6-foot prison cell under the psychologically devastating threat of death is extraordinary.

His story shows how a person from a weak socio-economic background can be caught in such a bizarre circumstance. It is not that it can happen to any of us but the fact that it is happening to people with clear economic and social disadvantages. His story is extraordinary among the other over a hundred exonerations already granted. Each of those cases is an exceptional case in itself. If you are an innocent person fighting to be alive and you have spend a big time of your life on death row and one day they tell you that you are free to go, I guess that is shocking.

Governor [Bill] Richardson who signed the death penalty repeal bill into law in New Mexico on Mar. 18, 2009, watched the documentary shortly before making his decision. He mentioned to Juan Melendez that he was deeply moved by it and in justifying his decision to repeal the death penalty, he stated that his primary concern was the large number of death row inmates who had been released from death row with evidence of innocence.

He also stated that he was troubled by the racism of the system. Both of these issues were squarely and centrally addressed in the documentary. It is expected that the documentary will serve as a very powerful educational tool that will help change public opinion about the death penalty in the United States and will also change the minds of some important policy-makers.

IPS: Again in 2003, the U.S. justice department sought to execute two Puerto Rican men – Joel Rivera Alejandro and Héctor Oscar Acosta Martínez – accused of kidnapping and murder. Do you think Melendez's case set a precedent at any rate? LRA: I think Juan's case certainly should stand as a warning signal in death penalty cases involving other Puerto Rican nationals, particularly, where the victim is white, the jurors are predominantly white and the defendant's witnesses are people of colour. One of the arguments of the documentary is that some people may think that Juan's case is just an exception to the rule and that his case shows that the system works – after all, he didn't get executed. This is an argument for the reform of the death penalty. The administration of justice can be an imperfect activity sometimes and some may argue that the system works towards the reduction of the mistakes.

But when we are dealing with a punishment that cannot be reversed, reducing or minimising the risk of mistakes is not good enough. All mistakes must be eliminated and we know that in any human system, it is not possible to eliminate all errors. Aside from religious and moral convictions, I don't think you can reform the death penalty system. You don't reform a procedure that you know will always be imperfect and could allow the death of an innocent person. That's the primary reason why it's a bad public policy.

IPS: What is Melendez doing now? LRA: Juan lives in New Mexico with his girlfriend who is an attorney and anti-death penalty activist. It is difficult for Juan to hold a regular job because he suffers from post-traumatic stress disorder, and because he travels quite frequently around the U.S. and abroad sharing his story and advocating for abolition of the death penalty. Upon his release, the state of Florida sent Juan on his way with just 100 dollars, a pair of pants and a t-shirt – the same things provided to all released prisoners in Florida. Unlike some other death row exonerees, he received no compensation for the many years he wrongfully spent on Florida's death row. He also received no apology from the prosecutor or the state of Florida.

IPS: What cinematographic language did you choose to tell this difficult story? LRA: I tried to work around the three main geographies. First, Naguabo, the coastal town in Puerto Rico where Juan lived before migrating to the U.S. Second, the Oso Blanco penitentiary facility, now closed, where we recreated some scenes, the time he spent on death row. Thirdly, the city of Albuquerque where he lives now. The openness of Albuquerque's geography and the happiness and colourful imagery of Naguabo's coast are a contrast to the limited and negatively charged environment of death row. These spaces allowed us to present different psychological moods.

In our conversations before the shooting of the documentary, Juan told me that when he was sad he would try to think about good things such as his mother and his town of Naguabo where his mother still lives in, his friends and family in Puerto Rico. From that remark I started to visualise the story according to the visual imagery of each of those spaces.

From the beginning we had set a specific goal and that is to produce a piece that is educational in a contemporary and cinematic fashion that can dialogue with young and adult audiences. There is already interest in showing the movie in Canada and Germany, so we believe the documentary will be shown outside the United States as well. We know that international opinion against the death penalty is becoming a more significant factor in the death penalty debate in the U.S.