WINDHOEK, May 21 2009 (IPS) - It is a Sunday around five o’ clock in the afternoon when carpenter Thomas Haimbodi knocks off work. He is waiting for the lorry that will take him and his colleagues from the building site – the office building for the new ministry of lands and resettlement in Windhoek – to Katutura, the township on the outskirts of the Namibian capital. 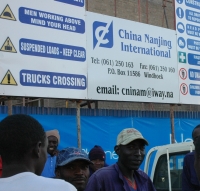 '‘I work nine hours a day, seven days a week,’’ says Haimbodi. ‘‘Not all of us do, but I need the overtime.’’ His Chinese bosses encourage the hellish hours. ‘‘He offers an informal agreement that’s a bit more than the normal wage.’’ ‘‘Normal’’, in Haimbodi’s case, is about 10 dollars a day.

Most earn much less than that, but Namibia’s staggering 40 percent unemployment makes it hard to say no to any kind of work.

Haimbodi’s employer, China Nanjing International, prides itself on delivering ‘‘Quality Construction for National Development’’, according to a large billboard on the site.

However, local Namibian construction companies have dragged Nanjing to court over the 8.7 million dollar government tender they feel was unjustly awarded – to no avail, however.

‘‘Chinese state-owned enterprises (SOEs) undercut local companies because they flout labour regulations,’’ says Herbert Jauch of the Namibian Labour Research and Resource Institute (LaRRI). He is co-editor of a soon to be published study on Chinese investments in Africa and their impacts on labour conditions.

The side-effects of the ‘‘Look East’’ policy that many African countries have adopted are alarming, the study reveals.

Ten Sub-Saharan countries participated in the study by the African Labour Research Network (ALRN). ‘‘In the Namibian case study we found out that, in 2008, most Chinese construction firms paid about 35 dollar cents per hour for labourers while the national minimum wage for the industry stood at one dollar.’’

According to Jauch, up to 70 percent of large construction projects in the country are handled by Chinese firms. ‘‘They often don’t have the necessary paperwork, such as employment equity certificates, but still get awarded valuable tenders.’’

The African researchers lament the job losses that flow from the employment of large numbers of Chinese workers at construction projects on the continent, as well as the competition of cheap imports in ‘‘China shops’’ at the local level.

The researchers write that, ‘‘China attached importance to both political and economic benefits and portrayed itself as an attractive economic partner and political friend.

‘‘For African governments, this presented an alternative to the ‘Washington Consensus’ and was termed the ‘Beijing Consensus’, that is, support without interference in internal affairs.’’

Chinese investments in Africa are concentrated in the energy, mining, manufacturing, construction, retail and finance sectors, the study reveals. The main countries targeted are South Africa, Egypt, Nigeria and Ghana.

On the ground, Chinese investments lead to problems.

China offers governments attractive incentives to open their doors to investments. Namibia, for instance, has a trade volume of 400 million dollars with China, but on top of that Chinese president Hu Jintao extended a 100 million dollar concessional loan to the country, as well as a 72 million dollar credit line.

In return for such development aid, Jauch says, the Chinese government gets easy access to African markets – something it needs now more than ever.

‘‘The unemployment situation in China, exacerbated by the credit crunch, results in the government sending large numbers of their workers overseas,’’ explains Jauch. ‘‘These labourers often earn more than their African counterparts.’’

The Namibian case study mentions persistent rumours of Chinese prisoners being transferred to work on projects in Africa.

One Oshiwambo-speaking owner of a construction company confirms this to IPS. ‘‘We have a hard time getting jobs from government, while the Chinese ship in container-loads of prisoners to work on public projects.’’

At Haimbodi’s construction site in Windhoek there are 15 overseers, all Chinese. ‘‘Communication is a big problem,’’ he complains. ‘‘It’s a mixture of broken English and hand gestures. Of course when they insult us in their own language, we get the message.’’

Haimbodi and his colleagues complain about the low salaries, union busting, tense labour relations and lack of protective clothing. ‘‘Look at their feet.’’ Haimbodi points to his fellow workers: ‘‘They wear open sandals.’’

Hou Xue Cheng owns a shop in China Town in Windhoek’s industrial area, where he sells vegetables from his farm outside Windhoek. According to him, his 20 or so Namibian workers earn about 50 dollars per month. ‘‘It’s not a problem, they are happy,’’ he insists.

Namibia does not have a legislated minimum wage.

Hou doesn’t give out contracts. ‘‘Workers often steal and that’s a big problem. I had to hire security guards. If people have contracts they will start a case at the labour commissioner. I do not want that. If you steal, you’re out. It’s that simple.’’

Apart from vegetables, Hou’s shop sells everything from hair products to alcohol, all labelled in Cantonese and neatly stacked in rows of racks.

The business owner also feels the Namibians are not very productive. ‘‘They leave early in the weekend, but we stay here, seven days a week till eight at night. It is necessary because people work during the week and want to shop in the weekend.’’

That Chinese products and services have virtual unlimited access to African markets, is ‘‘inconsistent’’ in the light of the troublesome negotiations for an economic partnership agreement (EPA) with the European Union, Jauch argues.

‘‘What is sold as South-South trade, are in fact highly exploitative practices. The Chinese get a chance to play the game in their own favour.’’