POLITICS-SOUTH AFRICA: 'One Miracle at a Time'

CAPE TOWN, May 18 2009 (IPS) - The African National Congress comfortably won almost two-thirds of the total vote in South Africa's recent elections, to retain power at the national level and in eight of the country's nine provinces. 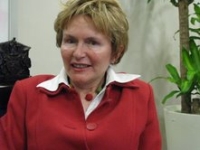 Helen Zille: 'When you buck the narrative and say, sorry, the content of the job comes first, you are labelled a racist and a sexist.' Credit: Stephanie Nieuwoudt/IPS

Its strongest challenge came from the Democratic Alliance (DA) party led by Helen Zille, who steered her party to victory in the Western Cape.

The DA's performance in the Western Cape built on success in local elections in 2006, when the party won control of the city of Cape Town. As mayor of the province's capital city for the past three years, Zille faced many bruising political battles with the ANC.

As newly-elected premier of the Western Cape, Zille remains as outspoken as ever. Days after Jacob Zuma, the leader of the ANC, was inaugurated as South Africa’s fourth president on May 10, Zille attacked him in a letter to The Sowetan, one of the country’s biggest newspapers. She said he had put the lives of his three wives at risk by having unprotected sex with a woman he knew to be HIV positive. (This had come out during his rape trial in 2006, a charge of which he was acquitted.)

Zille made her remarks about Zuma in response to criticism by the ANC and others of her decision to appoint only men – and mostly white men at that – to her provincial cabinet. The ANC Youth League accused Zille of being racist and of sleeping with these men. The Commission for Gender Equality indicated that it might take her to court for the appointment of only males.

In the midst of all this, Zille has to find a way to deliver services to the people of the Western Cape. Excerpts of her interview with Stephanie Nieuwoudt follow.

IPS: The DA’s support comes mainly from the white and coloured population groups of South Africa, where black people form a large majority. Is your victory in the Western Cape not a fragile one? Helen Zille: The 2006 victory, when the DA took over the City of Cape Town during by-elections, was much more fragile than this one. In 2006 we had to put together a seven-party coalition to get fifty percent plus one. This time around we got 51.5 percent of the vote on our own. The ANC is not accepting our victory, but we are used to it, and will not buy into the ANC narrative or the dominant media narrative.

IPS: What is this dominant narrative? Helen Zille: Quotas are the most important thing in South Arica. They [the media] have completely bought the ANC line on quotas. And when you buck the narrative and say, sorry, the content of the job comes first, as I have done, you are [labelled] a racist and a sexist.

IPS: The Constitution does provide for gender equality. As a women and a proponent of women’s rights, do you not feel that you are letting women down? Helen Zille: Let’s look at the issues facing women. Number one is the patriarchal sexual culture in which many men seem to think it is their right to have many unprotected sexual encounters. It puts women massively at risk of HIV/Aids, which is why the disease is predominantly a female burden.

Number two is the extent to which men make babies but are not prepared to take responsibility for their children by, for instance, paying maintenance. Another issue facing women is gender violence.

The ANC does not raise these problems, because they are hushed up under [the excuse of it being] culture. I have pricked these taboos, and am therefore persona non grata.

IPS: You had a strong team of women under you when you were mayor of Cape Town. Were none of those women available for the provincial legislature? Helen Zille: None of the women in the DA is a quota appointment. We would be greatly insulted if this was the case. I do not tell people they are to be deployed simply to get the gender balance right. People could apply for whichever list they wanted to. Most women applied for national appointments.

Those who applied – male and female alike – went for rigorous tests against the job description. I am interested in fitness for purpose. Five women – including me – in the caucus were eventually elected in top jobs. One of them, Alta Rossouw, is the chief whip of the party.

IPS: This public mud slinging between you and the ANC surely does not bode well for the future. Helen Zille: There is no mud slinging from my side. The media likes to present things as such. I wrote a rational argument based on interlinking logical points [regarding Jacob Zuma and his polygamous marriages]. The media published one sentence from that letter. Some issues are worth fighting for, and fitness for purpose – appointing the right person in a job, not based on gender – is one such issue.

IPS: You have run your election campaign promising service delivery, saying the ANC has left a mess behind. What are the main issues you are looking at? And how will you satisfy all your contsituents who are divided between rich and poor, black, coloured and white? Helen Zille: Some of the major problems are in housing, education, transport, public works and land development planning. I had to employ MECs who can get to the heart of service delivery. These people are competent and will deliver. They will work night and day to fulfil their mandate.

We can only do our jobs as well as we can in every single portfolio. We have to keep development going, spend the money well and have an open and clean administration. The DA has been criticized for being too white. But we have people of all groups in the top structure.

IPS: The DA has been victorious in the Western Cape. How do you intend increasing your support in the rest of the country, which is staunchly ANC? Helen Zille: One miracle at a time, please. The fact that we won the Western Cape is already a major victory. The voting patterns in this country have little to do with the levels of service delivery or policy issues, and everything with identity. The majority of people identify with the ANC and its leaders.