PORT-LOUIS, Jul 15 2009 (IPS) - Mauritius appears to have a happy problem with the 400,000 tons of waste it produces each year. The island’s only landfill is full and the government must decide whether to turn to incinerating waste – generating electricity in the process – or to compost it, to the benefit of farmers. 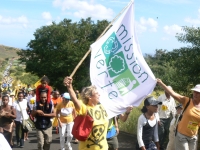 Environmentalists believe almost all of Mauritius's waste can be composted. Credit: Nasseem Ackbarally/IPS

Hundreds of trucks traverse the streets of Mauritius daily, collecting refuse that they dump at Mare Chicose, in the south-west of the island. The 200 residents of this small village have complained for years about respiratory problems, skin diseases and other ailments due to the pollution arising from the foul-smelling site. They have been calling on the authorities to relocate their homes elsewhere.

Until now, their cries fell on deaf ears, but their problems may be coming to an end. Set up in the 1990s to receive 300 tons of waste a day, this landfill presently takes in 1,200 tons. Its lifespan has been reduced from 20 to 8 years and it has filled up quickly.

The government proposes to replace burying waste with burning it. A local firm, Gamma Civic, in association with U.S. firm Covanta, proposes to install an incinerator-generator at La Chaumière, on the western coast of the island. This plant will dispose of three-quarters of the waste and generate electricity to help meet increasing demands for energy on the island.

The high cost of fossil fuel is added incentive to boost alternative sources of energy. Presently, about 80 percent of the island’s electricity requirement is produced from petroleum-based fuel.

The private joint–venture between local company Gamma Civic and U.S. waste management specialists Covanta – called Gamma Energy Ltd – will invest around 160 million dollars in a plant that will burn 300,000 tons of solid waste annually to produce 24 MW of electricity or about 6 percent of national demand.

But environmentalists claim the government is about to make a big mistake.

Vassen Kaupaymuthoo, an ecologist, says incineration is not adapted to Mauritius because more than 70 percent of the waste is green.

“The government says it needs more electricity for the economic development of the island. Mauritius has got a huge potential for wind energy – about 450MW – that remains unexploited. This is ten times greater than a big thermal plant,” he told IPS. Kaupaymuthoo says the island should solve the problem of electricity demand with wind energy projects and deal with waste by recycling it.

A few thousand Mauritians are protesting the incinerator project through public marches, press alerts and petitions to the government. They say it poses a big risk to the health of the population and the environment, through the emission of pollutants, particularly dioxin.

They have marched twice since the beginning of the year to the proposed site for the waste-to-energy project, shouting slogans against the promoter. The NGOs have also filed a case against Gamma Energy before the Environment Tribunal challenging the Environmental Impact Assessment (EIA) that the joint venture has already obtained from the authorities.

Environmental NGOs suggest a better solution for getting rid of the waste is a “reduce, re-use and recycle approach”.

“We have installed huge bins in several parts of the island to collect sorted – plastic, paper and glass separately – items for composting. Our members have been travelling round the island since last year to sensitise people on the three Rs,” Catherine de Spéville said.

Other institutions, like the municipality of Curepipe, in the south, are doing the same while a plastic recycling plant, Polypet Recyclers, is paying people to collect plastic bottles for recycling and export to other countries.

Christine Sauzier, another member of “Mission Verte”, finds that the population is very excited about this idea.

“We are encouraging people to make compost out of the green waste so as to give back to the soil what it has given to us instead of throwing it away. I am convinced that a majority of the population does not want to burn the waste to get electricity,” she told IPS.

Compost-making is not new to Mauritius. Since 1995, the National Federation of Young Farmers Clubs has been producing compost in several villages and using it in the fields where its members grow vegetables and fruits.

Simla Caria, officer of the Club, goes round the island to promote compost-making mostly by talking to women in their homes.

“Earlier, people did not know that they can make compost from the waste and use it in agriculture. Now, they do and many of them are joining us in this endeavour,” she said.

The NGOs are convinced that the volume of waste can be reduced so much that there won’t be a need for either an incinerator or another big landfill site.

Indradev Balgobin, former cadre of this Federation and one of the initiators of the compost-making project in Mauritius, estimates it is possible to compost all the waste “provided there is market for it in the countries of the region.”

“There would, then, won’t be any need for any incinerator-generator,” he said, recalling that such a project exists in the form of a solid waste recycling enterprise that has also obtained an EIA licence and is planning such a project.

But defending its project, Gamma Energy argues that the incinerator will bring a sustainable solution to waste management in the island.

Knight dismissed any risk to public health and the environment as the latest air pollution control equipment will be used to monitor emissions continuously, in line with European Union standards.

“That requires us to take samples periodically of stat gases, particularly dioxins and metals. And that will give us an ability to ensure that the plant is complying with the European Union directive laws.”

Quizzed in Parliament on Jun. 30, energy and public utilities minister Rashid Beebeejaun recalled that the Prime Minister’s special adviser Joël de Rosnay, who guides the “Maurice Ile Durable” project, has insisted that appropriate filters should be incorporated in the project with state of the art technology.

“This should be mandatory. The final decision will, however, be taken in the light of the advice from de Rosnay,” he stressed.

So pressure continues on Gamma Energy Ltd and the government in hopes that Prime Minister Navin Ramgoolam will back-pedal and stop this project. But the latter has recently dismissed critics of the waste-to-energy Project plan, calling them “unrealistic”. He says the street demonstrations based on erroneous information cannot dictate his government’s policy.

*This story is part of a series of features on sustainable development by IPS and IFEJ – International Federation of Environmental Journalists­ for Communicators for Sustainable Development (www.complusalliance.org)