SARANDÍ GRANDE, Uruguay, Jul 28 2009 (IPS) - Seventy years old now, Mr. Arrúa lives a comfortable enough life in Durazno, a town in central Uruguay. But he still remembers when his father took him to work as a farmhand when he was only nine. 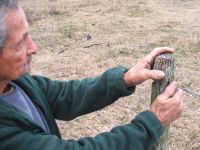 “I did a little of everything and had no set working hours. And sometimes I was barefoot even in the winter, stepping right on the frost, because I didn’t even have a pair of ‘alpargatas’ (rope-soled canvas shoes).

“Now that was poverty…” says Arrúa, whose sunup to sundown workdays in the countryside began when his mother died. After helping his father out for several years, he got a job in a coal yard at the age of 16, “where I worked up to 12 hours a day” before he went back to being a rural labourer, he tells IPS.

Things have changed since then in the countryside of this small South American nation wedged between Brazil and Argentina. Thanks to a new law, rural workers now have an eight-hour workday – ironic in a country that was a pioneer in the provision of social welfare benefits in Latin America, including the eight-hour workday, introduced in 1915.

Just before Christmas in 2008, Congress passed the new law regulating the workday of rural labourers, which was presented by the governing left-wing Broad Front coalition.

Besides establishing an eight-hour workday and 48-hour workweek, the new legislation requires rural employers to give their workers rest breaks, and to pay double for overtime.

The wages of rural workers have increased from 72 pesos (three dollars) a day on average in 2005, when socialist President Tabaré Vázquez took office, to 200 pesos (8.60 dollars) today, with employees in some sectors earning more, such as dairy industry workers, who earn around 400 pesos (17 dollars) a day.

But, as Héctor Piedrabuena, the president of a union of citrus workers from the western province of Salto, says, it will not be easy to put the new law into practice because “there are farmhands who have not even heard about it, let alone know how it works or how it is supposed to be enforced.

“But just having it is important. We are truly convinced that we will be able to achieve our objective,” an optimistic Piedrabuena told the local newspaper in Salto.

The trade unionist represents one of the few organisations that defend rural labourers, who number around 180,000 in this country of 3.3 million people, where 93 percent of the population is urban, according to United Nations statistics, and the countryside – mainly rolling plains with some low hills – is increasingly depopulated.

Extensive agriculture and stockbreeding employ the largest proportion of rural workers in Uruguay, followed by the production of fresh produce, while the plantation forestry industry has been growing fast in the past few years, according to a study by Ministry of Livestock, Agriculture and Fisheries researcher Yanil Bruno

Clash between law and deep-rooted customs

Víctor Hugo López, who lives in Sarandí del Yí in the central province of Durazno, has become one of the country’s top sheep shearers, hiring himself out with his shearing equipment and well-trained team.

López says it’s hard to find trained shearers, so he trains his own. “Young guys come and ask you to train them. So you cultivate these skills and values and get good results,” he says.

Sheep shearers charge 25 pesos (just over a dollar) on average per sheep, plus the cost of baling the fleece. But the system of paying sheep shearers by piece rate or according to agreements reached with the ranchers will now have to be adjusted in line with the new eight-hour workday, with built-in breaks.

In addition, if rural labourers have to work on Sundays, they are to be paid double.

The new law will take some adjusting to in sectors with their own particular characteristics, and employer-employee agreements are still the preferred arrangement in some areas.

Orlando Valdez was working on a sowing machine until last month. His day began at 6:00 AM, when his boss picked him up at home, and there was no fixed hour for the end of the workday. “During planting season we would eat and sleep in the field, in a tent that we put up, and sometimes we were on the tractor for more than 14 hours in a row,” he tells IPS.

When asked “Has it occurred to you to tell your boss that you’re only supposed to work eight hours?” he responds with an emphatic “no.”

“When it’s planting season, this is how you work, and that’s why we’re paid well for it.”

Álvaro Aguiar, a Radio Durazno journalist who specialises in agricultural questions, says “the eight-hour law is highly debatable, as it aims to set limits in a sector where they don’t exist.”

Aguiar, who was himself born on a farm, describes to IPS one common scenario: “On a farm or ranch where one or a few farmhands are on their own, many kilometres away from their boss, who would oversee their working hours and how? Who would decide when they are to quit work or whether they should just work an extra half-hour, to get their work done early so they can have the rest of the afternoon off?

“How do you assist the birthing of a calf with a watch in your hand? And who decides when the cow is going to give birth, and whether it happens during your work schedule?” he continues.

On cattle farms, where labourers generally do much of their work during the early morning and late afternoon hours in the summertime to avoid the heat, the actual hours worked may even sometimes be shorter than what the law stipulates, says Aguiar.

For his part, dairy farmer Javier Crosa from the central province of Florida tells IPS that “The law does not take into account the good relationship that generally exists between the farmers and their employees. But it does set limits on excesses that have actually been regulated anyway by the labour market, since there is more demand (for rural workers) than supply.

“The law is a guarantee for workers, but for employers it risks creating problems instead of clear rules in relations with their employees.”

Workers who milk the cows get up at around 4:00 AM and usually have a several kilometre trip from their homes in town to the farm. Then there is the evening milking.

The law states that when the interval between daily milkings is five or more hours, the time between the end of one workday and the beginning of the next must be at least seven hours.

Bolstered by the new law, dairy workers have begun to unionise.

“The aim isn’t to create conflicts but to try to join forces in order to achieve a fair dialogue for both sides, to try to gain an understanding of the problems we face,” María Celia Flores, who works on a dairy farm near the small town of Goñi, in Florida province, comments to IPS.

Rural workers in the area complain about low wages, and say that some farms do not respect the eight-hour workday and other labour regulations.

“The boss has his point of view, and the worker respects it. But he also has his own point of view. We have to try to bring about a dialogue between the two sides,” says Flores, a spokeswoman for a group of workers who are organising future actions.

“I don’t believe in confrontation; I believe in dialogue,” she says. “And if an agreed-on raise is difficult to comply with, then we need to hold talks. We also have to see if we can reach an understanding on the question of the eight-hour workday, and work out a way to negotiate the situation.”

Flores and her fellow dairy workers say they have been left in a vulnerable position in terms of labour protections because of the limited number of inspectors from the Banco de Previsión Social (BPS – Social Security Bank), the state body in charge of overseeing compliance with labour laws in Uruguay.

Although she welcomes the new law, she says it is of little use unless it is enforced.

Benefits included in the law like an extra monthly bonus for rural workers of 1,500 pesos (65 dollars) have been either ignored or only partially adopted.

“I don’t think we should have to pay for the damages (caused by the economic crisis), and I think it’s possible to get a dialogue going. After all, we all need to work. But by coming together, rural workers have lost our fear of speaking out, of losing our homes and our jobs. That is a fear that we should no longer have,” says Flores.

The latest raises approved by the tripartite wage boards – made up of representatives of government, employers and unions – have not been fully implemented. Asking around, IPS found that some workers have not received a raise since December 2008.

The eight-hour workday law also created a tripartite follow-up commission to monitor compliance with and enforcement of the new legislation and evaluate how well it works.

But the new law is one thing on paper and another thing in reality.

“Gauchos” – the “cowboys” of Argentina, Uruguay and southern Brazil – find the new hours strange. They are used to herding, branding, gelding and tending to livestock, repairing fences and doing other odd jobs, eating their meals, resting and going back to work again.

“This was decided by people sitting at desks in Montevideo (the capital) and no one asked us about it,” says Rómulo López from a ranch on the border between the provinces of Florida and Durazno. “I’m a gaucho, and I’ll do this for the rest of my life – being a gaucho all day long.”