AGRICULTURE: Piecing a Living Together In Rural South Africa

BREEDE RIVER, South Africa, Aug 29 2009 (IPS) - It’s early spring in the fertile Breede River farming region, with the fruit orchards a blur of pink blossoms and the first green shoots starting to sprout in the vineyards, but for household gardener Ishmael Shiki it’s been a bad start to the growing season. 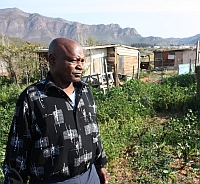 During the winter he lost his 82-strong flock of chickens to a mystery illness. A significant loss because each chicken would have sold for between three and six dollars; he would have made still more from selling eggs.

Now he will have to restock his chicken coop from scratch.

Shiki and his wife Hilda Ngxongxela live in the Mandela Square shack settlement outside Montague, one of a string of farming towns in the Breede River valley, three hours drive from Cape Town.

As Ngxongxela prises a turnip just bigger than a golf ball out of the ground and squeezes the shrivelled leaves from the bulb, it’s clear that producing food for household consumption from the hard, dry ground is a struggle.

“It’s not easy to get the best from it but we do,” shrugs Ngxongxela.

Before they started the garden in 2003, Ngxongxela says she and her husband survived on seasonal work in agricultural factories.

Ngxongxela estimates the garden brings in about 500 rand per month, a bit over 60 dollars. Produce is sold to the community and farm workers who visit the town on the weekend, but Ngxongxela highlights the lack of a larger market as a frustration. Shiki says he believes he could make more money from growing potatoes and onions, but does not have the land to do so.

The garden is one of 220 home gardens in the area started by the Rural Women’s Association, whose founder Dulcie Wingaard says it’s a constant struggle to find support for the project, obtain enough seeds for the gardeners and access sufficient land.

The need is great, she says, brandishing a thick wad of paper listing the names of those her association has helped feed.

Two years ago a household survey of the area by the Trust for Community Outreach and Education (TCOE) found that 72 percent of 2,668 respondents indicated that there were times in the last year when they had not had enough to eat.

TCOE researcher Boyce Tom says the main constraints to household food security remain. The seasonal employment provided by the local economy has not changed, leaving many without work for large parts of the year. Not everyone has a home garden, while the gardens themselves are “tentative”.

With some estimates putting the number of people evicted from farms since 1994 at close to a million, access to land remains a pressing concern for communities like Mandela Square, the likes of which have sprung up on the outskirts of rural towns.

In Robertson, another town 25 kilometres away, Jeffery Mpingelwane’s herd of cattle has dwindled from 24 to 13 head.

He used to live on a piece of commonage with his cattle, but the land has since been used for a land reform project for which he did not qualify. As a result he has moved into a shack in Robertson’s Nkqubela township.

From there he earns money running a shop selling household goods and also draws a pension from the municipality, where he worked as a tractor operator for 20 years.

In the summer months, he says, he is able to earn an income selling milk from his cows to the community at a little under 50 cents per litre.

“The people buy, they are crying for milk,” he says.

But the margins are small and from the money he earns he must pay his two sons who help him, cover the cost of petrol for his bakkie and pay for medicines should any of the cows fall ill.

Without land and capital he can’t even think of selling milk to the mainstream dairy industry as this would require purchasing a milking machine and building a shed.

While Mpingelwane wants land, Stuurman Posholi has land but bemoans the problems it has caused him.

A small-scale farmer in Robertson, Posholi explains how land he was allocated as part of a land reform project is useless because of an intermittent water supply.

“We did get land, but it is dead land,” he says. Without sufficient water, he says he cannot irrigate the land to grow feed for his cattle. Without the feed, his cattle die. He lost 17 last year, he says.

As a result, he says he is not farming the land and keeps his remaining 23 head of cattle elsewhere. With no money coming in, a Land Bank loan looms large.

To bring money in, he is selling off his herd, one by one. This year he says he has sold three head of cattle that bought in 750 dollars, less the 14 percent that went to the auctioneer.

“I don’t want to sell but I have to because I need the money,” he says.

Tom identifies a general problem in addressing food security: land reform, in his view, does not have a strong enough focus on the people at the base. As a result, the selection of beneficiaries for projects is flawed, and many people are drawn in who have no background or interest in farming.

He identifies another problem as the high cost of land. Government has acquired land for South Africa’s redistribution with great difficulty, as it keeps strictly to buying land made available on the open market.

Tom also calls for an audit of municipality-held commonage land, arguing that there is little understanding of how much there is and how it can be used to settle land needs.

South Africa has a new Department of Rural Development and Land Reform, however, whose focus is to ensure sustainable land and agrarian reform that contributes to rural development and food security.

Commonage grants are available to municipalities to acquire land for this purpose and provide infrastructure to ensure land is usable.

Nene said the department’s role was set to become “more pronounced” with a view to responding to the Millennium Development Goal of halving the total number of 2.2 million food insecure households by 2014.

For Mpingelwane, the land is there – it just hasn’t come his way. He says many have given up trying to access land because of the frustrations, but his passion for farming is still there.

“If I have got land and I already have cattle, pigs, sheep and chickens I think it is a good start for me to start farming,” he says, “I don’t think I’m going to be a rich man, but it can maybe put me at a better level of life.”