KABUL, Nov 2 2009 (IPS) - Niamatullah joined the Afghan National Police (ANP) for the same reasons that many Afghan men do. 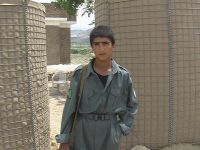 Underage soldiers are serving, dying and being maimed in the front lines of Afghanistan's fiercest battles. Credit: Najibullah Musafer/Killid

“I am illiterate,” he says, sitting in the police barracks in Aghandab district, Kandahar, a Kalashnikov machine-gun hanging from a strap on his neck. “I couldn’t find a job, so I was compelled to join the police. There were only two ways. Join the police or beg.”

Niamatullah has something else in common with all too many Afghan police and army forces: he’s only 16 years old.

On the record, government sources say that there are no underage soldiers or officers in the ANP and Afghanistan National Army (ANA). But speaking anonymously, many admit that in fact there are soldiers and police officers under the age of 18 serving in both security forces.

In interviews, these teen soldiers say that they need jobs to provide for their families and the police or army are more than happy to hire them, even providing the teens with fake National Identity Cards (NIC). In a matter of weeks, Afghanistan’s boys can go from high school students, to uniformed soldiers.

Seventeen-year-old Abdurrahman lies in a bed at Bagram’s military hospital, recovering from wounds suffered during a recent battle in Barg-e-Matal district, Nuristan province. A member of the ANP, he’d been shot in a gunfight between insurgents and foreign soldiers, though he was not directly involved in the conflict.

“I was standing with gun-in-hand,” he says, fear still etched on his young face, “at the entrance to a hotel. When the fight started, a stray round hit me.”

Police and military officials deny that under age fighters are a problem for Afghan security forces.

Ministry of Defense spokesman, Gen. Zahir Azimi, says that any complaints are likely from overly worried parents. He cites a well-known proverb to prove his point: "No matter how old the son may be, he is always a child to his parents."

Mohammad Ghais, head of recruitment for the 203 Thunder Kandak, an Afghan National Army (ANA) unit in Khost, also denies that he or his men recruit young boys, claiming that NIC's are thoroughly checked before a uniform is issued.

"It is possible that someone could lie on his NIC and state that he is older than his actual years," says Ghais. "But we also observe their appearance [to see if they look too young]."

But Najibullah Zadran, a member of the Afghan Human Rights Commission doesn't buy these explanations and denials. He says that the problem is the reliance on NIC's, which can be easily forged." This problem has been created by NIC's," he says.

Some in the Afghan military admit that there are underage soldiers fighting for the government.

Gen. Sardar Mohammad Zazai, who is responsible for security in Kandahar, says that through forged NIC's and family connections, minors have been allowed into the army's ranks. Since becoming the top commander in Kandahar last month however, Zazai says that he has made cracking down on this behaviour a top priority.

"Since I took command, serious attention has been paid to this matter," says the general. "It has stopped."


It is not the first time that Abdurrahman has seen or been in involved in battle, though looking at him it’s hard to believe that he’s old enough to have seen much outside of a schoolyard and his mother’s kitchen.

His uncle, 45-year-old Rohullah, who regularly visits Abdurrahman in the hospital, told this reporter, “I don’t think you believe that my nephew was a policeman. Believe me, he was.” Rohullah displayed his nephew’s ID card, showing that Abdurrahman was, and is, in fact a member of the ANP.

According to the Ministry of Labour, unemployment is at critical levels in Afghanistan, with 40 percent of workers jobless. For families desperate to put food on the table, the police and army offer steady work and long-term job security. Some teen-soldiers are even encouraged by family members to join the military or police.

Marjan Gul, 48, a soldier during Najibullah’s regime, says that young people fighting Afghanistan’s wars are nothing new and now, his family needs the income provided by his 16-year-old son’s military paycheck.

“He always has on a military uniform,” Gul says of his son. “He goes to the front lines of war. I am blind … if he quits his job, then who will support us?”

The law regarding underage soldiers is explicit. A presidential decree issued by Hamid Karzai in 2003 expressly forbids anyone under the age of 18 from serving in any military or police branches – conforming to Article 38 the Convention of the Rights of Children.

But some say that despite this law, the Ministry of Interior actually would encourage youths to join the security forces, by helping them obtain fake identity cards.

Zai-Ul-Haq, 17, is a police officer in Kabul who says that in order to recruit young men, “the Ministry of Interior issues NIC’s with an older age on them. Or they will update your existing NIC, so that you are of an eligible age.”

He says that when he applied to work for the police, “I lied about my age on the NIC. There aren’t enough police and soldiers, and that is why NIC’s are granted for small or underage boys. They just increase the ages.”

One former police officer, who lives in Khost province and asked that his name not be used in this story, says that he joined the police as a minor, even though he still is not legally eligible because he is too young. He says that the man who hired him knew that he was under age, but falsified an identity card so that he could join

“I knew a police officer,” he says, “I told him that I wanted to become a policeman. He recruited me and made me an NIC. No one ever asked about my age.” He says that he quit the force last year.

There is also the question of how qualified these teens are to carry out the work of the police and military, that is, keeping Afghans safe. When ordinary people see uniformed children with guns patrolling their streets, it does little to convey a sense of civil order.

Obaidullah, a 38-year-old from Kandahar, says that when he sees underage police, he begins to think less of the agencies that are supposed to be protecting him, and thinks that they may be doing more harm than good.

“They do not know military affairs and are not professionals,” Obaidullah says of teen-soldiers. “They may not know how to use that gun they are carrying.”

Insurgents and Taliban groups have long used the youngest of young men to help battle government and coalition forces. Insurgents often use children to carry explosives, perform suicide attacks or act as lookouts during operations.

Sometimes, the children are unwitting accomplices to the insurgency.

Last month, Akaz Daily, a Saudi Arabian newspaper told the story of an 11-year-old child named Eidullah, who was given a bag of flour by insurgents to deliver as a gift to a regional Afghan military commander.

What Eidulla didn’t know, was that the bag was packed with explosives. The bag prematurely detonated, blowing one of the boy’s legs off.

* This investigative story was originally published in the Killid Weekly, a publication of Killid Media. IPS and Killid, an independent Afghan group, are partners since 2004.