MONTEVIDEO, Nov 29 2009 (IPS) - Left-wing candidate José Mujica was elected president of Uruguay with nearly 52 percent of the vote Sunday, seven to eight percentage points ahead of his rival, the right-wing Luis Alberto Lacalle, according to projections by pollsters. 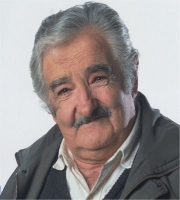 Mujica, a former senator and agriculture minister, will take over from socialist President Tabaré Vázquez on Mar. 1, to head the second administration of the leftist Broad Front coalition.

The unseasonal heavy rains of the last few weeks, which have forced more than 6,000 people out of their homes due to flooding in different provinces, hardly let up on Sunday, but voters flocked to the polls anyway in this South American country, where voting is compulsory.

The mood during Sunday’s runoff was much less jubilant than in the first round on Oct. 25, when the Broad Front garnered just over 48 percent of the vote, winning a majority in parliament for the second time in history, but falling short of an all-out victory for Mujica. By contrast, Lacalle’s National Party won 29 percent, and the Colorado Party took nearly 17 percent.

The National and Colorado Parties, which were founded in 1836, dominated the political life of the country until 2005, when the Broad Front – created in 1971 – won the national elections for the first time ever.

Observers consulted by IPS said Sunday’s calm was due to the sensation among voters on the left that the runoff was merely a formality, given the large proportion of votes won in October and the projections of the polling companies. However, Montevideo, the capital, exploded in celebrations when Mujica’s triumph was announced.

Nor will there be any surprises on Mar. 1, when Vázquez hands over the presidential sash to his successor. Despite their very different personalities, no major modifications are expected in terms of the government’s economic policy, marked by a strong emphasis on social justice, or its foreign policy, according to political scientist César Aguiar and economist Marcel Vaillant.

Despite the contrast between the blunt-talking Mujica, known for his colourful, colloquial expressions, who did not trade in his comfortable casual garb for a sports jacket until the campaign was well under way, and the soft-spoken circumspect Vázquez, an oncologist, there will be no shift in course, as the president-elect himself has repeated over and over during the campaign.

“If at any point my temperament as a fighter made me go too far in my remarks, I apologise, and tomorrow we will all walk together,” Mujica said Sunday night from the platform set up in front of the NH Columbia hotel across from Montevideo’s oceanfront drive, addressing thousands and thousands of supporters whipped by the heavy rains and the strong winds coming off the Rio de la Plata estuary.

His comments were directed towards the opposition, with which the Broad Front has proposed negotiating policies of state on certain issues above and beyond party politics, over the next five-year presidential term. “Here there are neither winners nor losers; all that has happened is that a new government has been elected,” said Mujica.

The calm was reinforced by the words of Lacalle, who greeted his rival and called on his followers to be “respectful” of the Broad Front’s victory.

The president-elect based his campaign on the achievements of the current administration, which included a reduction of the poverty rate to 20 percent from a record high of 32 percent in 2004, and a decline in extreme poverty from four to 1.5 percent of the population.

In addition, as Mujica and his running-mate Danilo Astori – Vázquez’s former economy minister – pointed out during the campaign, economic growth ranged between 12 and seven percent a year until last year, before the global economic crisis hit, and unemployment fell from 21 percent in 2002 – during the financial collapse in neighbouring Argentina and Uruguay – to just eight percent today.

Another major accomplishment was the Plan Ceibal, which made Uruguay the first country in the world to provide a laptop, with internet connection, to every primary schoolchild in the public education system – a programme that will now be expanded to secondary school.

In addition, the government carried out a major tax reform aimed at redistributing income by increasing the burden on the middle and upper income sectors.

“To judge by the campaign, the changes with respect to the current government will be minimal,” university professor César Aguiar, a sociologist who heads the Equipos MORI polling firm, told IPS.

While Aguiar said that although the president-elect’s personality could usher in certain modifications, he added that there will be no radical changes, and that the next five years “will be calm.”

That view, which coincides with those of other experts who spoke to IPS, contrasts sharply with Mujica’s past as a young urban guerrilla fighter in the 1960s and 1970s – an aspect that figures prominently in news coverage from outside of the country.

“It is important to highlight that although Mujica in the past was one of the leaders of the Tupamaro National Liberation Movement (MLN-T), that was four decades ago, after which he spent 13 years in prison (during the 1973-1985 military dictatorship) and now has been involved in normal civic life for a full 25 years, during most of which he was a parliamentarian,” Aguiar underlined.

Since he was released from prison when democracy was restored in Uruguay, Mujica has dedicated himself to building a strong political faction within the Broad Front and to cultivating flowers on his small farm on the outskirts of the capital, where he will continue to live as president, and plans to build a farming school with his presidential salary.

Furthermore, “personality-based politics in Uruguay are neutralised by an institutionalised system of political parties with strong traditions that are very hard to break.

“Things are different in Uruguay than in other countries of Latin America, where politics are more unstable because large proportions of the population are young people or rural migrants to the cities, or the indigenous population is increasingly being incorporated into civic life – in other words, major social changes are taking place,” he said.

“The only significant change we have here is that every year we get a year older,” he joked, referring to the ageing of the population.

For Aguiar, “not even the left’s arrival to the government for the first time, in 2005, was a radical change. It was not a rupture, but merely a long-announced change that took place in a very smooth, calm manner.”

Mujica has friendly ties with left-leaning Argentine President Cristina Fernández and her husband, former president Néstor Kirchner (2003-2007), and with the leftist Hugo Chávez of Venezuela and Evo Morales of Bolivia. But he has also clearly marked his differences with them, and has repeatedly stated that his model is Brazil’s moderate leftist President Luiz Inácio Lula da Silva.

“With regard to the country’s economic policy and foreign relations, there will be a sense of continuity with the Vázquez administration, above and beyond a new aesthetic and some gestures that could make (the new president) look more like Chávez or Morales,” said Vaillant, a professor of international trade at the University of the Republic.

But he noted that Mujica has stated many times that he is aligned with Lula’s approach, “which points to continuity,” he said, adding that the president-elect will also take “the middle way” in regional relations.

“It would be illogical for the new government to shift direction when, for example, the current policies have brought high economic growth and high levels of foreign direct investment, which has boosted growth and has helped the country weather the global crisis without damages.”