CAPE TOWN, Nov 13 2009 (IPS) - Human rights and democracy are causes that are never completely won, which is why civil society needs the support of philanthropists. 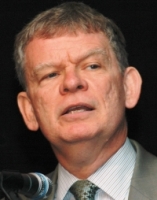 Gara La Marche: 'While I exhort international donors to maintain their involvement, ultimately, most of the support for civil society will have to come from within (each) country.' Credit: Inyathelo

This is the view of Gara LaMarche, chief executive and president of The Atlantic Philanthropies (TAP), one of the largest philanthropic foundations in the world. It spends some 400 million dollars annually in seven countries: South Africa, Vietnam, Ireland, Northern Ireland, the U.S., Bermuda and Australia.

LaMarche was in South Africa, where TAP is the largest funder of human rights work, to deliver the keynote address at the Annual Inyathelo Philanthropy Awards ceremony recently. TAP funds Inyathelo – The South African Institute for Advancement, a non-governmental organisation that “grows local philanthropy for the long-term sustainability of civil society”.

IPS: Your foundation is unusual in that it is “spending down” its money by 2016. Why? Gara LaMarche (GM): The donor, Chuck Feeney, has a strong feeling about making as much of an impact (as possible) in his own lifetime. The idea is that new wealth is created all the time. You can make a more concentrated effort with substantial wealth to (address) problems if you’re not hoarding your resources.

IPS: Why human rights? GM: Human rights are a fundamental prerequisite for democracy. We work in a range of countries of which some are relatively open, like this one (South Africa), but all of them face human rights challenges.

One that crosses all the borders is migration. The U.S. has 12 million undocumented people, so you have to deal with how you normalise the situation of a group of stateless, rights-less people.  Here you have the Zimbabwean refugees.

IPS: You are also the most prominent funder of the lesbian, gay, bisexual, transgender and intersex (LGBTI) sector in South Africa. Gerald Kraak (GK): While spending down you have to focus closely to have maximum impact over a shorter period of time. We commissioned experts in each of the jurisdictions to advise us on what the key human rights issues were.

What came out of the South African scoping exercise was that the LGBTI community was particularly vulnerable, as were refugees and migrants and the rural poor.

When Atlantic (Philanthropies) came into the field there was an organised LGBTI community but it was disparate and weak, crisis-driven; not programmatic or strategic. The profile of the movement was white, male, middle-class.

We set out to change that, to strengthen and professionalise organisations, to (spur) organisations on in townships and rural areas to grow their base among poor, black gays and lesbians and to change the demographics of the leadership to have more black people and women.

That decision to take a particularly vulnerable group and invest heavily in it – we also do capacity building and organisational development support – has over the past six years yielded the results (we were seeking).

The sector has also been savvy in terms of its advocacy and litigation strategy, with some significant advances, the key one being the recognition of gay marriage.

Gerald Kraak: 'Statistically, individuals and domestic foundations actually give more than either government or international donors but the problem is that it tends to be conservative in focus.'

IPS: Many civil society organisations (CSOs) are worried about what will happen when you close down. GM: We have to think about this problem everywhere. The youth sector in the U.S. is a relatively well-funded area. When we disappear, the loss will be less significant for them than, for instance, the human rights area in the U.S. around liberty and security and trying to undo the Bush administration’s policies.

We are one of the biggest funders in this area by far. We have to stay the course.

Right now the ability to tap into sources of money is harder. People have less money. One of the things we hope to do is to create a lesbian and gay community foundation into which we’ll put significant money and get some other donors to also put money into so that there is a continuing source of money.

LGBTI issues are hard to fund. If you work the way we have by focussing on communities within the LGBTI grouping, such as people of colour and lesbians, then you have some obligation not just to pull out the rug.

GK: In our rural programme we are taking organisations through a three-year programme around issues of sustainability to get them to position themselves so that they can raise resources from other sources. We want to roll this out to other programmes.

IPS: How do you understand South Africans’ apparent lack of enthusiasm for funding causes? GK: Statistically, individuals and domestic foundations actually give more than either government or international donors but the problem is that it tends to be conservative in focus. Corporations will fund a school or clinic that their workforce uses, but they won’t fund something as intangible as human rights.

It is easy to raise funds for children, which is an appealing issue, but it’s more difficult getting funding for legal advice offices because they are abstract. Corporate funding is always interested in seeing a return. But they can’t see what the return would be in funding legal advice offices.

IPS: What is your impression of how South Africa is faring in consolidating its democracy? GM: The U.S. democracy is 237 years old and it is in danger, so democracy is never really secure. You still have in this country an immense degree of participation. The turnout at the last election was high. There is a cautious optimism, at least on our part, about the beginning months of the Zuma administration.

The Zuma administration’s steps on AIDS (after the previous Mbeki administration’s AIDS denialism) underscore the importance of CSOs (as) their pressure moved the Zuma government on the issue.

No country should trust the political sector to take care of everything. As Frederick Douglass said, “power yields nothing without a struggle”, which is why it is important to influence government through the strength of civil society organisations.

The question for CSOs is always where the resources will come from. In all countries that have undergone a transition with the involvement of external funders, the transformation of the country loses its romance for certain donors.

While I exhort international donors to maintain their involvement, ultimately, most of the support for civil society will have to come from within this country. It’s a country with a lot of poor people but also a lot of wealth.