VITERBO, Italy, Dec 7 2009 (IPS) - Dinner one evening when he was a kid put William Rees on track to becoming a sustainability pioneer. It was after a day at work on the family farm when he was nine or 10. He saw he had had a hand in growing everything on his plate. That brought a fascination with a connection to earth that would never leave him. 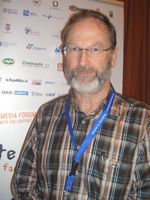 Together with a team of post-graduates, above all former PhD student Mathis Wackernagel, Rees, now a professor at the University of British Colombia, went on to develop the concept of the ‘ecological footprint’. That is now prime measure of the demands humanity puts on nature.

He spoke to IPS at the Greenaccord conference in Viterbo, near Rome.

IPS: You have helped change our way of thinking about how our everyday lives have an impact on the world and climate change with the ‘ecological footprint’ concept. This must be very gratifying. WILLIAM REES: Yes. As a metaphor and as a scientific method, I’m very proud we’ve had such an impact on changing the debate. It has an enormous contribution in the climate debate because in many industrial countries the carbon footprint, a sub-set of the ecological footprint, amounts to half or more of the human eco-footprint.

IPS: Nevertheless consumption and energy use levels continue at unsustainable rates. According to the Global Footprint Network headed by your former student Mathis Wackernagel, if everyone lived the lifestyle of the average American, we would need five planets. So your message has not succeeded yet. WR: There are several ways of looking at this. It’s well known among cognitive scientists that new information often does not make a difference. People become habituated to a certain way of life. When there are great uncertainties, we tend to gravitate to the things we know.

And if I change my life entirely so I had a perfectly adequate eco-footprint, I would take a major hit. But if no one else did the same, I’d be overwhelmed by other people’s effects. So for individuals to change is almost meaningless, if they are not in a context of social change.

But what new knowledge does do is prepare people to be willing to accept the changes we make collectively. So if people are well informed about the drivers of climate change, about the role of consumption and population in creating an oversized ecological footprint, then they are more likely to accept the kind of government and international policy changes that are absolutely necessary to make a real difference.

I’m from North America, a car-driven society, and very few people will voluntarily change that. But if governments provide substitutes in cities, via major investment in public transit, then people are more likely to be willing to give up the car for much of the work week.

But I as an individual cannot provide the public transit. That’s a collective solution to a collective problem.

IPS: With the Copenhagen climate change talks, a lot of people seem to think that by tweaking our lifestyles and making a few changes such as more use of renewables, we can go on and live happily ever after. The impression is that you do not think this is true and we need more radical changes. WR: Absolutely. Technology has a major role. But the simple reality is that whenever we look at major technological efficiency gains, they tend to increase rather than decrease consumption. So think of a major change that reduces the energy content of something, then energy prices are likely to fall; if this operates through to the economy then people will simply consume more energy across the board.

IPS: Do we have to change the widespread view that economic growth is always a good thing? WR: There’s no question that economic growth is good if you are starting from virtually zero. People need basic food, clothing and shelter. But we see over and over again that as people become wealthier, there is a disconnect between improvements in wellbeing and per capita income. (After income of) something like 10,000 dollars per capita per annum in a country, there’s no further general improvement in longevity. You’ve obtained about 95 percent of the benefits of income growth at a relatively low income level. Similarly, in most high income countries we see no further correlation between felt wellbeing, a personal subjective feeling of how happy we are and our future prospects, and income growth. Most North Americans and many Europeans were happiest in the 1950s and 60s, when incomes were half what they are today. At low levels, extra income enhances your ability to consume the basics of life. But you reach a point where further income actually complicates life and quality of life begins to decline.

If we were really living up to our self-proclaimed capacity as rational beings, the evidence of intelligent life on earth, we would be reorganising the global economy, so that needed growth was taking place in countries where there are significant gains in wellbeing. Growth is simply an increase in the scale; development means an improvement in the quality, and we have seen increasing growth in rich countries but a decline in development. We are dis- developing even as we are growing. It’s growth that makes us poorer, rather than richer.

IPS: What you’re suggesting is a fundamental rethink of our values and an overhaul of our social and economic structures. Have you any idea how we can bring this about? WR: Education is important. But it’s very slow. There are obvious examples of social learning – the civil rights movement, the gay rights movement, women’s liberation – but they take decades to take full effect. With climate change we simply don’t have 40 or 50 years.

One thing people do respond to is prices. The rhetoric suggests we are in a global market place – I can assure you it is nothing of the kind. We’ve organised this economy in ways that assure prices of goods and services do not reflect their true costs of production, hence the economy is a lie. We are willing to move all our dirty industries to Asia, so externalities such as pollution, waste and public health problems are now happening half a planet away.

Any economist will tell you this is a gross market failure. But we won’t do anything about it, because it facilitates trade and we love getting those cheap goods from China, so your laptop that costs 300 or 400 pounds is probably worth twice that if you were to internalise those external costs.

There will be no change unless governments come together and begin to introduce the legal and institutional framework that causes us to have a more truly market-orientated economy and a more heavily regulated economy too. For those who recoil at the idea of government regulation, I can say without any fear of being proved wrong by history that the longer we wait, the more freedoms will be lost and the more stringent the regulations will become.

I think we need some very strong leadership here from one of the major countries – say look, it’s clear from the science that we’re committing a kind of cultural suicide, therefore we will take the lead and this is what we are trying to do. If that requires setting up trade barriers to make it possible, I’m all for it. We clearly need much stronger leadership.