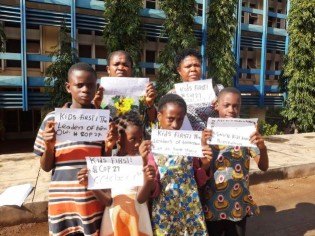 By Paul Virgo
Lea is a three-year-old from Mexico who loves ladybirds. Siddhiksha, a six-year-old from India, has a passion for trees and wild animals. Rachelle is a 12-year-old Tanzanian who is wise beyond her years. They are smart and adorable and they are among the stars of a short film that is aiming to remind the leaders taking part in the COP27 UN Climate Conference that they have a duty of care towards young and future generations.

By Paul Virgo
When it comes to moral endorsements, having the Vatican’s backing takes some beating. So the international campaign for a legally binding Fossil Fuel Non-Proliferation Treaty took a huge step forward in July when Cardinal Michael Czerny, the prefect of the Dicastery for Promoting Integral Human Development, gave it his total support.

Climate Collapse Is Not Inevitable But ‘Great Leap’ Needed

By Paul Virgo
In 1972 the Club of Rome alerted the world to the harm human economic systems were doing to the health of our planet in its seminal, best-selling report, The Limits to Growth. With the devastating impacts of the climate crisis hitting home harder than ever, especially in the Global South, that warning about the dangers of exponential economic growth has been fully vindicated.

By Paul Virgo
Employees at the International Fund for Agricultural Development (IFAD) may have cause to fear for their jobs after Yukiko Omura was appointed vice president of the United Nations' rural poverty agency in February.

RIGHTS: Italy Shows its Ugly Side

By Paul Virgo
If the first step towards solving a problem is recognising you have one, the Italian authorities look to be some way from tackling the growing racism and xenophobia affecting sections of its society.

By Paul Virgo
Dinner one evening when he was a kid put William Rees on track to becoming a sustainability pioneer. It was after a day at work on the family farm when he was nine or 10. He saw he had had a hand in growing everything on his plate. That brought a fascination with a connection to earth that would never leave him.

DEVELOPMENT: To Grab, Or To Invest

By Paul Virgo
The World Food Security Summit in Rome this week opened up a dispute between what may be investment in farmland to some, but is seen as land grab by others.
ADVERTISEMENT ADVERTISEMENT