TARIME DISTRICT, Tanzania, Dec 30 2009 (IPS) - Susanna Solomon is still tending her shamba, but she won’t eat the harvest from her farm when it’s ready. 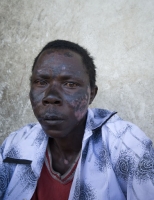 Solomon, 55, has been farming here near Nyangoto village, in Tanzania’s rural Tarime district for a long time.

“I was farming rice before,” she said, “but I can’t anymore because of the chemicals.”

Solomon’s farm was contaminated by a leak in May from Barrick Gold’s North Mara mine – just 100 metres away. In large sections, the grass has completely died, and plants and some vegetation have off-coloured stalks. The stream running from the mine site has green growth covering it; there is no sign of insects, tadpoles or frogs, and some crystallised plants stick out of the water, as if frozen or covered by salt; no other streams in the area looked like this.

“I was advised not to eat the vegetables I’m growing,” Solomon says,”because you can be affected. I am still cultivating the land because otherwise I will lose it; so I am just here to hold the land.

“I am still waiting for compensation, but they haven’t said anything (about it).”

Following heavy rainfall in May, water from a storage pond at the North Mara mine seeped through the walls of a storage pond. Monitoring by Barrick at the time detected pH levels of 4.8 in the Tigithe River, far too acidic for fish to survive and well short of Tanzanian drinking water standards.

According to the local community the contamination has caused fish, crops and animals in the surrounding area to perish. Villagers allege between 700 and 1000 head of cattle have died since the incident, but provide no evidence for this.

Many locals have also complained of health problems such as skin irritations and stomach pains as a result of drinking and bathing in the water. The results of tests carried out at health centres in the region have yet to materialise.

Chacha Ochibhota is 21 years old. He has discoloured skin pigmentation covering his face; his eyes are bloodshot. He speaks quietly and moves slowly.

His medical record states that on July 1, he claimed to "have used acidic water, contaminated by the mining project - sustaining burns on the face…" and he was referred to the Tarime District Hospital for further investigations.

"I started feeling the problems in May this year," he said. "I have a farm near the Tigithe River. When it was hot and sweaty I would bath in the water and wash my face and body to cool down.

"It felt different, when I tasted the water, it didn’t taste normal, it was a salty taste, and it was the feeling of rubbing salt in wounds...

"I was referred to the district hospital, but because I had no money, I didn’t go.

Another man, Mwikwabe Mwita, of Nyamongo village, also complained of skin irritation and stomach pains; he says as a result of drinking and bathing in the Tigithe River after it was contaminated. The irritation visible on his skin is less severe than that of Ochibhota, although he said it had impacted heavily on his daily life.

Both men said that they have not received results of tests from the Tarime District Hospital, so official information as to the cause of their problems was unavailable.


The North Mara Gold Mine officially operates with a zero-discharge policy, meaning no contaminated water is released the environment. Standing next to the leach pond, below the massive wall of the waste dump of potentially acid-forming material from the mine, Gerhard Hermann, production manager for the mine, explains how the system works.

“Basically what it is, is an impervious layer, right at the bottom, of high density polyethylene plastic. One millimetre thick, dense plastic, which the acid cannot penetrate through. We have a drainage system on top of that, and on top of that a waste dump.”

The dump – rock excavated from the mine – reacts when exposed to rainwater, creating an acidic runoff that must be contained.

“So any water percolating through the waste dump can only report to one place and that’s the pond,” Hermann continues. “When it hits that liner, it can’t go anywhere else. The only place water from there can go from there is into the drainage pipe. And the only place those drainage pipes go to is a lined leach pond… once it reaches the leach-pond it is also completely contained.”

Unless of course something breaches the lining. Barrick claims that the incident in May happened only as a result of villagers stealing the PVC lining from the leach ponds to use as roofing for houses and shops in surrounding villages. In the areas IPS visited, no such misuse of the lining was evident.

Due to manufacturer delays, Barrick was unable to completely replace the lining until August, so for three months, the acid contents may have been seeping through the retaining wall into the river. Currently, the water flowing from directly below the containment pond is at a pH level of about 4.5.

Tanzanian drinking water standards are between 6.5 and 7.5, but the company says that even ten metres downstream from where polluted water enters the river, the pH is back within normal ranges because of dilution.

“This is where we want to dig a trench, so if we ever have breach of the liners again we can pick up the seepage in a nice deep liner here and then pump it back into the ponds,” says Hermann.

The production manager believes that villagers are attracted to the area because the rewards of selling gold outweigh the risks of being caught and charged. “So they were here before us, we stole the land from them, and they’re just returning the favour…” he said, sarcastically.

The community says that Barrick has not compensated people fairly, if at all – and Barrick states that the company is compensating people “handsomely” for any damage caused by the mine.

Hermann explains, “We compensate them for their land, for crops on their land and also for any structures. We pay as if their entire property was planted with bananas (even if it’s not), we call that the ‘full banana concept’.”

Hermann points out that no sick or displaced person appears to be taking direct action against Barrick.

“No one has laid any charges against us as far as I’m aware, (because) they have to have a case. And the fact that they’re not doing anything, makes you question if they really have a case or not,” he says.

“They are trying to put the blame on the community,” says Chacha Wambura, executive director of Foundation HELP, an NGO based in the town of Musoma, 100 km away . Wambura has been working to expose environmental issues around the mine and running awareness-raising and capacity building campaigns for the national community.

“People are not cooperating because they want justice to be done. The community can be aggressive, but the company (and the government) are not trying to alleviate problems. The government is backing Barrick 100 percent, without knowing they are fuelling their own graves: because this water flows into the Mara River, and discharges into Lake Victoria, and so many animals and humans will be affected by that.”

The Mara mine is subject to a set of environmental standards, monitoring bodies and guidelines which regulate environmentally sound practices for mining operations. Barrick says it adheres to these regulations.

However, according to Evans Rubara, a policy and advocacy advisor working on natural resource management in Tanzania and Zambia, there are no transparent measures which have been put in place.

“There is a rising concern over why the Mineral/Mining Policy discussions have stalled,” said Rubara. “Our government has been used for a long time and is being an accessory to Barrick Gold Corporation and the Canadian government to suppress the truth.”

Walking past Solomon’s farm along the path to the river many people – mostly women and children – are going to collect water from the Tigithe. They are all careful to fetch water from upstream of the mine.

“We have always collected water from here, we live nearby,” says Esther Dustin, walking with five other women from the area. “Most people depend on the river for everything; for bathing, washing, drinking, and for cattle.

“We have been complaining about the water since 2005, but this year was the worst. We have to use the water, because there is no other source, the Mara River is too far from here.”