LISBON, Feb 2 2010 (IPS) - Just a decade ago, criticism rained down on sunny, windy Portugal for not making the most of nature’s gifts to develop renewable energy sources. Now all signs indicate that it did not fall on deaf ears, as the country has become a leader in the field. 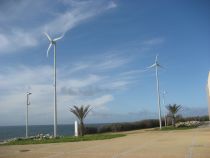 Today, this southern European country of 10.5 million people on the west of the Iberian peninsula has substantially reduced its dependence on imported fossil fuels, and wind and solar energy now provide 35.9 percent of the electricity it consumes.

And when adjusted to take into account the 23 percent shortfall in hydroelectric power in 2009, wind and solar power represent 41.1 percent of electricity supply, according to the Portuguese Renewable Energy Association (APREN).

The greatest expansion was seen in Portugal’s wind energy industry, which has taken second place in the world after Denmark, displacing Spain to third place.

According to Lurdes Ferreira, an environmental expert with the Lisbon newspaper Público, 15 out of every 100 watts of electricity consumed last year in Portuguese homes were generated by wind energy, while in Denmark, just over 20 percent of electricity came from wind energy, and in Spain the figure was 14.3 percent.

In 2009, according to an assessment report released in early January by Rede Electrica Nacional (REN), which operates Portugal’s electricity grid, out of every 24 hours of electricity supplied, on average three hours and 36 minutes were wind-generated, an increase of 31.6 percent over 2008.

The struggle to promote wind energy is fought on a number of fronts, including promoting private use of small wind turbines.

In São Pedro do Estoril, a coastal resort and fishing village in the municipality of Cascais, linked to Lisbon by 26 km of highway that carries some of the country’s heaviest traffic, seven small wind turbines have been set up in order to prompt their use in private homes and businesses.

The turbines supply electricity to the Centro de Interpretaçao Ambiental da Pedra do Sal (CIAPS – Pedra do Sal Environmental Centre) in São Pedro do Estoril, producing enough energy for the building’s normal needs and demonstrating their potential benefits to visitors.

The wind-powered generators installed at CIAPS “are part of a project for optimising and supplementing energy production, run by the Cascais Energia agency,” said Vera Ferreira, a manager at this not-for-profit private municipal organisation.

“The agency’s goal is to promote sustainable, monitored consumption of electricity in the CIAPS building, and at the same time put on a demonstration to educate visitors about energy efficiency concepts,” she responded in an email to IPS.

CIAPS is also equipped with a meteorological station that can measure wind speed and direction, rainfall and solar radiation indices, and display these values in real time.

This monitoring is useful for assessing “the results of renewable energy generation systems,” as well as “for weather and climate studies,” Ferreira said.

CIAPS was designed as an ideal place to “promote the values of diversity in the biophysical world and of the richness of the landscape, allied with a pedagogical dimension to encourage the exchange of knowledge between the scientific community and visitors,” Ferreira said.

In the last three years, other renewable sources of energy have also grown, on both a grand scale and a more modest one, like the Cascais project.

Solar energy increased by 315 percent over that time period, albeit from a very low initial level in 2007, and hydroelectric power grew by 24.7 percent.

Taken together, renewable energies provided 35.9 percent of the country’s total electricity consumption last year, approaching the goal declared by socialist Prime Minister José Sócrates, who wants 45 percent of Portugal’s power consumption to come from renewable sources by the end of 2010.

The head of APREN, Antonio Sá da Costa, recently said that it might be possible to achieve the 45 percent figure by the end of this year, but added that “it will be difficult.”

Meeting the goal would require: implementing all the wind energy projects that are currently tied up in red tape awaiting permits; upgrading dams at hydroelectric power stations belonging to Energias de Portugal (EDP); and greater co-generation (recycling ‘waste’ energy for electricity or heating) with renewable energy.

Sá da Costa said that reaching the target would depend, above all, on there being no increase in electricity consumption, or a maximum increase of one percent. If demand increases further, the country will have to import fossil fuels, which will bring down the share of renewables in the energy mix.

With nearly half of the energy it produces to come from renewable sources in 2010, the state-controlled EDP pledged in a Jan. 16 communiqué to reduce its carbon dioxide (CO2) emissions by 70 percent in 2020.

Portugal and Spain are favourably placed in terms of renewable energies, in contrast to most of the other countries of Europe, which are concerned about cutting CO2 emissions while securing a future that is less dependent on imported fossil fuels.

This has been the main European reaction so far to the Copenhagen summit’s failure to reach an agreement, and it involved Belgium, Denmark, France, Germany, Ireland, Luxembourg, the Netherlands, Norway and the United Kingdom.

The grid will connect 65 power plants in the nine countries – eight from the European Union, and Norway – using a cutting-edge distribution system and drawing exclusively on renewable sources of energy. The cost of the project is estimated at 30 billion euros (43 billion dollars).

Most of the costs will be absorbed by private companies, especially the big European energy consortiums, Lusa reported.

Thousands of kilometres of high-voltage undersea cables will be laid over the next 10 years, mainly off the coasts of Germany and the United Kingdom, to transmit wind energy from these countries, hydroelectric power from Norway and wave energy from the North Sea to the heart of Europe.

The grid’s main purpose will be to balance wind, water and solar energies to prevent overall fluctuations in supply. Another reason for the innovation is that the existing grid has no way of storing wind energy.

Sven Teske, an energy expert with global environmental watchdog Greenpeace, welcomed the initiative, saying the European energy network “is in urgent need of expansion, as it is no longer in a position to store energy from existing wind farms,” according to Lusa.

The colossal increase in the number of European projects to develop alternative energies “has its roots in the appalling rise of pollution, or in other words, in irrationality and the failure of the dominant model of economic growth, which has created the need for a new energy culture to replace dependence on oil,” Portuguese environmentalist Isabel de Castro told IPS.

A determining factor, even for those who do not support clean energy per se, “is the permanent political instability in the region where most oil production and natural gas reserves are located, which makes the search for alternative solutions a global priority.”

De Castro, a lawmaker for the Ecologist Party (the Greens) from 1992 to 2002, is a keen supporter of renewable energies, efficiency, and “above all, the capacity to put into practice new ways of living, producing and consuming.”

According to the activist, efforts need to be put into “alternative energies, not just wind power but also solar heating, photovoltaic energy, biomass, waves and tides, as well as encouraging energy efficiency and changing production processes, relying on innovation and clean production.

“An eco-efficient energy policy ought to be a global strategy. Saving the planet will take more than wishful thinking,” de Castro concluded.