NEW DELHI, Feb 9 2010 (IPS) - Women’s movements have played a critical role in creating political space for female participation in politics around the world. In fact, there are more women in government today than ever before. 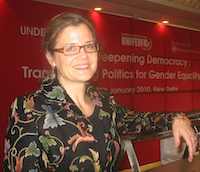 Anne-Marie Goetz: 'The structural exclusion of women is striking, and does tell us that there are serious double standards.' Credit: Paula Fray/IPS

According to UNIFEM’s Progress of the World’s Women 2008/2009 report “Who Answers to Women? Gender & Accountability”, women now hold an average of 18.4 percent of seats in national assemblies, though the rate of increase is still very slow.

Around the world, a number of countries are undergoing an extended process of democratic consolidation, in which legal systems are being amended to incorporate new constitutional rights and political systems are being tested for their capacity to tolerate opposition, says UNIFEM’s chief advisor for Governance, Peace and Security, Dr Anne-Marie Goetz.

But more needs to be done as women’s effectiveness in translaitng policies into action depends upon gender-responsive governance reforms. And the women’s movement can play a critical role in supporting such social change.

Paula Fray spoke with Dr Goetz, who has extensive experience in addressing the phenomenon of the use of sexual and gender-based violence as a method of warfare, supporting women’s engagement in peace processes, gender-sensitive security reform, and inclusive post-conflict peacebuilding. The following is an edited version of the interview.

It is often said that women don't make the difference that we think they would do.

The difficulty is that we have too few cases from which to judge... Women constitute a critical mass of 30 percent of national parliaments in only 27 out of 192 countries.


Q: The United Nations Development Fund for Women (UNIFEM), with U.N. Democracy Fund support, has been working with organisations supporting women in politics across the globe since 2006. What have been the greatest challenges in supporting women in politics? A: Around the world women have a lower human and capital resource endowment than men: they often have fewer social networks linked to power than men, less education, less experience and less money. Networks and money are critical for effective political competition.

In addition, women often lack the extended political apprenticeship that men have. This means that women may not have spent the time moving up the ranks in political parties that men have, and in consequence, they may lack the senior mentors, the support systems, and the built-up constituency base that men have.

Add to this that women running for office do not have a natural constituency amongst voting women, as women in patriarchal societies do not necessarily perceive their interests as linked to women’s leadership or a gender equality political agenda. In politics, women have many competing loyalties.

Q: Why is it necessary to have a specific focus on women when there remain many marginalised groups still excluded from political participation? A: There are many social groups excluded from or marginalised from public decision-making. What is so striking about women as a general category is that it is so socially enormous – half the population.

The structural exclusion of women is striking, and does tell us that there are serious double standards built into how democratic political competition works. What proves this is globalised tolerance of violence against women. If one in three men were subjected to violence, we would never accept that.

Another reason to focus on women when there other forms of marginality is because many types of exclusion are exacerbated by female gender. Address women’s rights, and we can also address some of the inequalities affecting other social groups.

Q: So what impact does women’s participation have on democracy and good governance? A: It is often said that women don’t make the difference that we think they would do. The difficulty is that we have too few cases from which to judge as there are too few countries that have too recently attained levels of women in politics high enough for us to expect to see a tangible impact. Women constitute a critical mass of 30 percent of national parliaments in only 27 out of 192 countries.

Where women are in a critical mass and have been there for long enough, and where state is supportive, we most certainly see changes in outcomes that favour women. In areas where women head local government, spending patterns change in favor of women and children. Particularly evident is higher local investment in water and poverty reduction for women.

Individual women in high places can also make a difference. In the case of investigations to the incidents of September 28, 2009 in Guinea, for example, there were two women on the international commission of inquiry and both were stalwarts on women’s rights. These women made sure that the issue of the high number of extremely brutal and public rapes of opponents of the regime was looked at. Would that have happened otherwise? I honestly don’t think so.

Q: You have said that that delivery of public services is the most direct measure of government accountability to women. Can you elaborate on that? A: If women have no say in public life then they cannot provide instructions in or influence public priority setting and resource allocation. If women are not part of decision-making then how will public authorities know what their needs are or how to address their needs?

An accountable government is one that gets systems in place to encourage women to make input into making those decisions and that takes feedback from women. Truly accountable governments recognise constraints on women’s access to public decision-making and on their capacity to influence public priority setting because of gender discrimination and low human resource endowments.

Strong gender-sensitive public service provision can help women to make up for these deficits and empower women to become more effective leaders.

Q: Where should we be focusing our energies for reform if we are to improve women’s participation in governance? Which interventions have greatest effectiveness? AG: We need strong women’s movements everywhere. Around the world we have seen that we’ve lost ground where the women’s movement is not strong. Collective action has been the key to most gains made in women’s rights in the past century and remains the best means of amplifying women’s voice and leverage in public decision-making.
Tweet
Republish | |