BOGOTÁ, Mar 16 2010 (IPS) - During Sunday’s legislative elections in Colombia – in which rightwing President Álvaro Uribe’s allies were the big winners – polling stations in one-third of the country’s municipalities were at risk of violence, corruption or fraud, according to the ombudsman’s office and election observers, who reported vote-buying and pressure on voters. 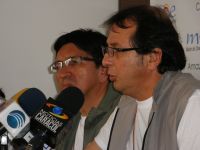 Jorge Rojas, president of the Consultancy for Human Rights and Displacement (in foreground). Credit: Constanza Vieira/IPS

Some of the public were also alarmed at the appearance of the National Integration Party (PIN), a reincarnation of the National Democratic Alliance (ADN) party, which was banned by the electoral court due to irregularities.

The organisers of the controversial ADN are in prison or under investigation for their ties to the far-right paramilitary militias, which are accused of heavy involvement in the drug trade as well as appalling human rights abuses in this South American country that has been in the grip of an armed conflict since 1964.

The legislative polls drew attention worldwide not only because they were seen as an indication of voter intention for the May elections – in which Uribe would have won a third term hands down, according to opinion polls, if the courts had not thwarted attempts last month to modify the constitution to allow him to stand again – but also because of scandals that have surrounded Congress for years.

As an editorial in the El Espectador newspaper put it, “Over the last eight years, Congress has been caught up in the worst crisis in its history.”

There have been corruption scandals involving legislators swapping votes for government contracts or public posts, as well as the so-called “parapolitics” scandal in which one-third of the members of Congress have either been arrested or investigated since 2006 for alleged ties to the paramilitary groups.

According to a report by the Bogotá think tank Corporación Nuevo Arco Iris, 13 of the candidates on the electoral list of the U party are currently under investigation in the scandal, as well as 11 from the Conservative Party, six from ALAS and five from Radical Change – all of which form part of Uribe’s governing coalition – and five from the opposition Liberal Party.

Despite the legal prosecutions, many politicians have found a way to maintain their influence through relatives or friends who act as their front men.

Controlling Congress through others is an old practice that was used by druglords like the late Pablo Escobar (1949-1993) of the Medellín cartel, Gilberto and Miguel Rodríguez of the Cali cartel, and paramilitary chief Salvatore Mancuso, who shocked the country when he boasted that the paramilitaries controlled 30 percent of Congress.

The Rodríguez brothers and Mancuso are in prison in the United States, to which they were extradited along with other paramilitary chiefs on drug trafficking and money laundering charges.

Columnist Hernando Gómez Buendía said the next president would basically be picked in Sunday’s elections, in which the big winner was the U Party, led by former defence minister Juan Manuel Santos.

The U Party’s strong showing Sunday prompted Santos, the poll favourite for the upcoming presidential elections, to declare that “Today the U party has won – the party of President Uribe.”

According to government spokespersons, the elections were the smoothest and calmest in 30 years.

But foreign observers reported that vote-buying and fraud was as bad as, or worse than, in the last elections. They also denounced undue pressure on voters, such as the threat of blocking poor voters’ access to health care if they did not cast their ballots for a given candidate.

When the election results began to trickle in, there were celebrations in a number of prison cells in Colombia. Álvaro García, a former senator sentenced last month to 40 years in prison for ordering a 2000 massacre of 15 peasants in the northern town of Macayepo, made sure he will continue to be active in politics in his region through his sister Teresita García, who was elected to Congress Sunday.

Other newly elected legislators are the wife of a former governor who was sentenced to seven years in prison; the son of an imprisoned lottery businesswoman charged with murder and money laundering; the political partner of a congressman; and the cousin of a former senator who is on trial.

In short, the two parties with the largest number of legislators in prison or facing prosecution were the big winners Sunday.

The U Party won 27 seats in the 102-member Senate, while the Conservative Party took 24. The two parties also garnered the largest number of seats in the 166-member lower house: 44 and 47, respectively. Between them, the two main ruling parties won over 50 percent of the seats in both houses of Congress.

As a result, over the next four years, Uribe will enjoy a stronger political influence than any of his predecessors did.

Sunday’s results also indicate that the phenomenon of “parapolitics” – the alliance between political and paramilitary leaders – is alive and well.

The non-governmental Electoral Observers Mission (MOE) denounced widespread vote-buying and fraud, including scholarships in exchange for votes, ballots cast using the identity cards of people who have been forcibly disappeared, or people voting with other people’s IDs.

And according to the head of the Organisation of American States (OAS) election observers mission, Enrique Correa, in the northern town of Magangué, votes were paid for at the polling stations.

Now that the governing coalition’s hold on power was strengthened in Sunday’s elections, there are no guarantees that these corrupt practices will disappear.

To judge by the outcome, the link between the drug mafias and paramilitaries and success at the polls was strengthened.

By contrast, election platforms offering a chance for change fared poorly on Sunday: the leftwing Alternative Democratic Pole will now have eight senators, instead of 10.

And presidential candidate Sergio Fajardo, a former mayor of Medellín, saw his hopes buried in the polls.

Those who are pessimistic over Uribe’s continued influence are starting to look to the Green Party, now that former Bogotá mayor Antanas Mockus (1995-1997 and 2001-2003) won the party’s primaries – the only sign of change on Sunday.

On Saturday Mar. 13, 200 people from the southwestern department of Nariño, on the Pacific coast, were fleeing harassment by Los Rastrojos, a paramilitary group.

Do those displaced by the war effectively have the right to vote?

“In January and February, 3,300 people were displaced, especially in the Pacific coast region,” Jorge Rojas, president of the Consultancy for Human Rights and Displacement (CODHES), a prominent local human rights group, told IPS. “These were massive displacements of people pushed out by paramilitary groups. These people aren’t even thinking about the elections – they’re focused on surviving.”

The government acknowledged that at least 54,000 internally displaced persons had difficulties voting.

Colombia has one of the largest populations of internally displaced people in the world, numbering nearly five million according to CODHES.

“The displaced, because of their situation, are not only displaced by the armed conflict, but would appear to be displaced from democracy. There are no guarantees for them to participate in elections,” said Rojas.