BAMAKO, May 19 2010 (IPS) - A new family law has raised tension in Mali. This controversial law, intended to give greater freedoms and rights to women, has been sent back to the National Assembly for a second reading after protests from Muslim radicals. 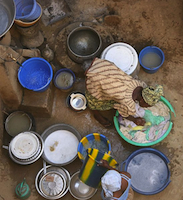 At least one conservative women's organisation argues that the progressive changes to family law are not welcomed by ordinary Malian women. Credit: Ferdinand Reus/Wikicommons

These Muslim are threatening to make the country ungovernable if the law is enacted in its original form as voted by Parliament in August 2009.

“Those who oppose the new family law have started threatening legislators, railing against them in sermons and organising protest meetings. They’re also using newspapers and radio since they learned that the law is on the agenda of the current parliamentary session,” Salimata Kouyaté told IPS. Kouyaté is an activist with the Malian Network of NGOs and Women’s Associations.

The next full session of parliament is scheduled to begin on May 20, but for now there is no confirmation when the legislation will be reviewed and put to a vote.

Emblematic of the struggle is the legal definition of the relationship between a married couple. Historian Bintou Sanankoua told IPS that “Article 32 of the old law on marriage and guardianship stated that the husband was responsible to protect his wife, and the wife had to obey her husband.

“This article makes the woman a lifelong minor whose every act is subject to her husband’s approval who may, as we’ve seen in daily practice, abuse this power.”

The new law says that, “Spouses owe each other fidelity, protection, relief and assistance. They commit themselves to the community of life on the basis of affection and respect.”

Women represent nearly 51 percent of the total population of Mali, according to provisional results of the general census of population and housing, released in late 2009.

Over 70 percent of them live in rural areas, 83 percent have never attended school, 14 percent have only a primary school education while only 0.1 percent have a university or postgraduate degree.

The same source shows that Malian women occupy just under 11 percent of leadership positions in decision-making bodies. There are only seven women mayors out of a total of 703, and only three of the country's 22 ambassadors are women.


Elsewhere, the new law states that women and men have equal inheritance rights, while in Muslim tradition a woman is entitled to only half the share given to her brothers. Another change is that women would no longer need their husbands’ permission to work.

For Malian public figures, merely expressing support for the law is enough to attract trouble.

“The High Islamic Council, on behalf of all Muslims, challenged twenty provisions in the draft family law that clash with our religious and societal values,” the council’s president, Mahmoud Dicko, told reporters.

“The president promised to take our claims into consideration during the rereading period, but HCI was never contacted,” he added.

While the debate on the new law has taken an alarming turn, human rights advocates are trying to warn the authorities in Mali to stand firm.

“Among the key violations of human rights in Mali in 2009, you can list women’s status,” Bréhima Koné told IPS. Koné is a lawyer and president of the Malian Human Rights Association (known by its French acronym, AMDH) based in the capital Bamako.

“The new family law is good legislation that certain people, that I don’t want to name here, are challenging. There is very little public information about its contents, and if authorities aren’t careful, Mali risks backsliding on women’s rights.”

All eyes are on the National Assembly. The tension is such that even advocates for the law are silent, fearing reprisals by radical Muslims.

“This new law is actually the old 1962 law, but updated to reflect present-day reality,” wrote a moderate Muslim cleric, El Hadj Sekou Amadou Diallo, in a letter in defence of the new law.

Diallo, after receiving death threats by telephone, was deposed by a group of imams from his position in the town of Kati, 15 kilometers from the capital.

“This standoff between supporters and detractors of the new code has lasted since last August, and it may spark a religious conflict that the country does not need,” Idrissa Maiga, a Bamako-based journalist told IPS.