MIDEAST: Dreaming With Their Feet

GAZA CITY, May 18 2010 (IPS) - Ahmed Ismail, 23, is leading a dance out of troubled times in Gaza. Breakdancing is his way to help the youth of Gaza begin dreaming and having fun again. 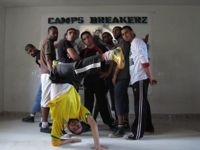 He and Muhammad Al-Ghreiz, also from Gaza’s Nuseirat refugee camp, set up the Camps Breakerz group in 2005. It was the brainchild of Muhammad, who first discovered breakdancing when he was growing up in Saudi Arabia.

“I saw some crazy guys ‘flying’ in the street one day and I told myself I had to try it,” he recalls. “I taught myself from the Internet, TV and movies. Eventually, the guys on the street welcomed me in and I became one of the best.”

Studying in Saudi Arabia was difficult for a Palestinian, and in 2003, at the age of 17, he moved with his family to Gaza. There, he worked to earn his diploma in nursing.

Homesick for breakdancing, which had not yet been introduced to Gaza, he searched for two years before he found Ahmed, who was also studying nursing at the time, and shared his passion for the dance.

Ahmed was injured when an Egyptian soldier shot at his right knee at the Rafah crossing. He was forced for to give up breakdancing and manage the team instead. By that time, however, Camp Breakerz had grown. Today, there are eight regular breakdancers on the team.

Breakdancing is a style created and developed in the 1970s as part of hip- hop culture among African Americans, and later on among Latino and other youths in New York City. It is performed to both hip-hop and other genres of music that are often remixed to prolong the musical “breaks” (a break is when all elements of a piece of music, except for percussion, disappear for a time).

Muhammad and his team chose the name Camp Breakerz in part to advertise their pride in their refugee camp origins. “People think camps are just for poor people with no culture,” says Muhammad, who performs under the name Funk B-boy. “But in fact, the camps have talent.”

Until January, Camp Breakerz trained at the Al-Ahli Sports Club in the Nuseirat camp. “But unfortunately, the club was completely destroyed during the last war and we are now on our own,” Muhammad says.

They are back to training at his house in the camp, in cramped quarters that are distinctively theirs. A more suitable place to practice is among the many things on the group’s wish list, along with a video camera, a computer with editing capabilities and mattresses for training and teaching. But funding is hard to come by.

“The international NGOs care mostly about political issues and humanitarian aid, like food handouts and medical supplies,” says Muhammad. “Those are important, but so is helping youth discover how to have fun and be confident again. Breakdancing can do that.”

Camps Breakerz has performed at rap parties, restaurants and on large stages throughout Gaza. On Valentine’s Day they performed at a show especially for women, focusing on freedom. On another occasion they donned yellow, green and red masks — the colours of the different, often warring, parties within Palestine — and danced to express their yearning for unity.

They also put on workshops for children as young as 12, coaxing them to smile again and develop a sense of confidence in their abilities. To date, the workshops are only with boys, given the conservative Islamic culture in Gaza. However, a workshop that includes girls is in the works for the American International School, the only co-ed educational institution in Gaza.

The Camp Breakerz crew is ready for a larger, international audience. They want to show this joyful side of Gaza to the world. And as word about the crew spreads via YouTube, Facebook and international volunteers returning from Gaza to their home countries, they are getting a lot of invitations to perform elsewhere.

Their ultimate goal is to compete in the international breakdancing championship in Germany in June. But to make that wish come true, their international friends must work to help open the doors of the prison that Gaza has become.

Until then, they keep dreaming…with their feet.