AFRICA: Renewing the Promise of Education for All

JOHANNESBURG, Jun 14 2010 (IPS) - The World Cup is wreaking havoc with a key millennium development goal in South Africa: as the football tournament hit its stride, not a single child across the nation attended school. 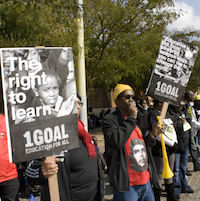 The 1GOAL Campaign is urging governments to live up to their promises to provide every child access to quality education. Credit: Marshall Patsanza/IPS

It’s temporary, of course: the winter holiday has been extended so schools are closed during the month-long tournament.

But there are 43 million children in sub-Saharan Africa who are truly unable to attend school, according to the United Nations Development Programme – just over a third of the 115 million of children around the world who are out of school. Many millions more struggle to get an education under testing conditions – inadequate buildings, overworked teachers facing enormous classes.

The adoption of universal education programmes has led to an increase in the number of African children in school, but many problems remain.

In Kenya, the number of children attending primary schools has doubled since 2003, with 80 percent of school-aged children now enrolled. But, as the government does not have the financial means to pay and train additional teachers, classrooms are overcrowded and the quality of education is declining.

In Sierra Leone, school authorities have hired additional teachers – at their own discretion – to face the increase of children attending schools. Now the education department is refusing to pay those teachers.

“Even if young people have access to education as in Africa, a lot of their education is not quality education,” says Salim Vally, spokesman for the Public Participation in Education Network, a citizens’ group working for quality education for all South Africans.

Alongside trade unions and others, PPEN is one of 20-odd in South Africa participating in the 1GOAL campaign. The campaign was launched in 2009, with the aim of using the platform of the 2010 World Cup to mobilise public pressure on world leaders to fulfil the promises they have made in the frame of the United Nations’ Millennium Development Goals for 2015.

Two of the development goals to which African countries have signed up focus on education; the commitment is both to ensuring all children are able to complete primary school, and to providing opportunities to girls for education at all levels.

“We are all uniting with one voice to make sure that education is a top priority,” said Alex Kent, head of 1GOAL South Africa. “We want to make sure that policies are put in place, that the money has been put forward, that girls get a chance to learn, that everything is being made possible out of this World Cup.”

Access to education is particularly unequal in South Africa: “Rich people benefit from good quality education. But the vast majority of children receive a low quality education. Only seven percent of our schools have a library. And the culture of reading is very important,” Vally told IPS at a Jun. 10 march to Johannesburg’s Constitution Hill.

“If we can host the World Cup, which costs over 60 billion rand (7.8 billion dollars – the more commonly provided estimate is $4.5-5 billion), surely we can provide our schools with libraries, relevant books, and well-trained teachers.”

Schools in Sandton, a weatlhy area of the Greater Joburg municipality, lack for nothing: libraries, computers, teachers. But many schools in Soweto or in the central business district, five or six children may have to share one textbook.

“Here in South Africa we have the best schools in the world and the worst,” said Kent. “We want to make sure that policies are put in place to fight against inequality. We want to see out of that summit new polices, some new commitment on education, we want all African countries to put 20 percent of their budget into education. We want them to recruit and train more teachers.”

Just before the winter holidays end, and school resumes, South African president Jacob Zuma will host other heads of state at the world education summit in Cape Town. The Jul. 7 meeting is to draw up an action plan that will see every child in the world in school by the time the next edition of the World Cup is played in Brazil in 2014.