GERÊS, Portugal, Aug 31 2010 (IPS) - Environmentalists are alarmed: fires have destroyed close to 100,000 hectares of forest in Portugal this summer, releasing one million tonnes of greenhouse gases into the atmosphere. Worst of all, the forests are losing their ability to absorb carbon. 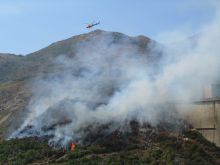 Experts say the amount of carbon dioxide (CO2) emitted is not a major concern, compared to emissions in 2008 — the latest year for which official statistics are available — but stress that the fact that the forested area of the country has lost three percent of its carbon-fixing capacity is definitely worrying.

Up to Aug. 15, the area burned in summer fires this year was 75,000 hectares, but since then unofficial estimates indicate that another 25,000 hectares have been devoured by the flames.

The Quercus National Association for Nature Conservation (ANCN) said estimates indicate the fires have released 1.1 million tonnes of CO2 so far in 2010, equivalent to 29 million cars being driven the 310 kilometres that separate Lisbon from the northern city of Oporto.

Quercus acknowledges that this is not a huge quantity, but underscores that this CO2 should not have been emitted; it contributes to further reducing the capacity of forested areas to absorb carbon, and is a stain on Portugal’s performance under the Kyoto Protocol.

The Kyoto Protocol is an annex to the United Nations Framework Convention on Climate Change, which recognises that the preservation of forested areas helps curb global warming.

Official statistics for 2009 are not yet available, but projections by Off7, a private company that certifies emissions, indicate a three percent loss of absorption capacity, equivalent to about 100,000 tonnes of CO2 emissions that the forests were unable to prevent.

Recovery of this carbon capture capacity could take decades, even if reforestation is carried out immediately, because trees take years to reach their full absorption capacity, Off7 warned.

The experts at Quercus and Off7 concur that by the time the Kyoto Protocol commitment period expires in 2012, Portugal’s CO2 emissions might be 10 million tonnes higher than its permitted quota.

Added to the worrying effect on greenhouse gas emission levels, August has been a tragic month for huge protected natural areas in the centre and north of the country.

The Peneda-Gerês National Park in the extreme north of the country was one of the worst affected, with 10,000 hectares destroyed, 12 percent of its total area.

In the designated “total protection areas” within Peneda-Gerês the devastation was greater still, with 26 percent of the areas earmarked for special conservation destroyed.

Likewise, in the first 20 days of August, 5.5 percent of the 101,000-hectare Serra da Estrela Natural Park, also in the north, was consumed by fire. Eighty-five percent of the Vale de Azares, a valley in the park, was burned to cinders.

Who is to blame? The usual suspects: logging and pulp companies, landowners who fail to clear their land of brushwood, and arsonists. So far the police have arrested 38 people suspected of deliberately lighting fires.

The state, as the principal owner of forested areas in the country, “has never taken responsibility for them, and instead threatens us, ordinary people, with intervention of our land if it looks neglected,” José Ferreira Serrão, who lives in the Peneda-Gerês area, told IPS.

“The exodus of young people to the cities in the last few decades, the failure to clear brushwood from public and private forested areas, and the virtual disappearance of the old occupations of shepherd and cowherd, who have been replaced by big, modern cattle, goat and sheep farms, are all factors that have led to the increasing accumulation of brushwood,” Serrão added.

At the peak of summer, with temperatures reaching 41 degrees Celsius in August, this brushwood makes excellent fuel, whipped up by strong winds from the northern hills.

Environmentalists and agronomists agree that climate factors have favoured brush fires. But they underline that the lack of proper forest management is the main culprit in the devastation of large areas of the country every summer by forest fires.

Serrao agreed with the experts’ unanimous view, because in his opinion, “in Portugal forestry problems are only discussed and analysed when thousands of hectares of forest are going up in smoke.”

Another local farmer, Rui da Gama, said “the really big fires in Portugal came along with the interests of pulp companies” that produce the cellulose needed to make paper.

“Show me one fire, just one, that started on pulp company lands. They arrived, set fires, and bought the vacant land for a song, becoming the largest landowners in the country. You’d have to be blind not to see it,” he alleged.

But Viseu said that “fighting the fires is no solution; what is needed is a consistent forestry policy that includes proper zoning, management and maintenance. Without that, our country’s natural heritage will be increasingly impoverished.”

This year there have been more fires in Portugal than in Spain, France or Italy, southern European countries with a similar climate, but with territories between four and six times the size of Portugal’s.

The number of forest fires in 2010 has already surpassed the average of the last three years, although it is still nowhere near the tragic records of 2003 and 2005, when a combined total of 764,000 hectares of woodland burned to the ground, equivalent to 14 percent of Portugal’s entire forested area.