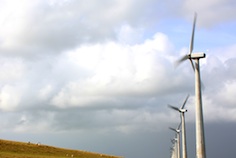 “We are not there yet, but countries are starting to take the bull by the horns,” said Mark Hankins. As a renewable energy consultant he has worked in the field of rural electrification and renewable energy in East and Southern Africa for the past two decades.

The main driver behind the development is rising electricity prices, Nairobi- based Hankins explained. “In East Africa the energy prices are two to five times higher than in South Africa. This is highly unfavourable for both the industry and consumers.”

Hankins was one of the delegates who attended the 2010 edition of the Africa Energy Week, a four-day event hosted by state-owned enterprises and companies and which took place in Cape Town from Sep 27-30.

Another reason behind the growing East African focus on renewable energy is that the electricity demand is outstripping grid supply, partly due to rapid economic growth.

“There are the diamond, agriculture and oil industries – all sectors that are expanding and need more energy,” Hankins explained.

“Various governments in East Africa realise that the current grid does not meet the growing power demand, and therefore are slowly taking note of renewables such as solar, wind and hydro-power.

“Since moving to Kenya in 1993, I can say that I am encouraged by what I see in East Africa when it comes to renewable energy developments,” Hankins continued, describing how six wind turbines were erected on Ngong Hills in southern Kenya last year.

Situated near the Kenyan capital city of Nairobi, the turbines add 5.1 megawatt (MW) to the national power grid and form part of Kenya’s first wind farm.

Another Kenyan wind farm with a production of 310 MW, the largest in Africa, is in the pipeline.

The project will comprise around 300 wind turbines and will cost 408 million dollars, of which the African Development Bank has financed 70 percent. Various Dutch and Kenyan investors paid the remainder.

Kenya is not the only East African country looking at renewable energy, Hankins stressed. “Uganda, Rwanda, and Ethiopia are also considering renewables, and so is Tanzania. The latter has a wind farm that produces 50MW and has another 50MW project on the agenda.”

Pointing to Africa’s general abundance of sunshine, water, and wind, Christopher Clarke, director of Inspired Evolution Investment Management, argued that “of all regions in the world, Africa has the greatest potential to leap frog from conventional energy to cleaner forms of energy.

“According to our estimates, the Southern African Development Community over time will produce less electricity from coal.

“At the moment, 70 percent of the region’s energy is generated from coal. In 2025 this could be 42 percent. We also predict that between now and 2025, electricity production from hydro-power and gas will increase by 60 percent and 150 percent, respectively,” Clarke added.

One of the African countries that have embarked on a mission to expand its gas-to-power capacity is Tanzania.

“At the moment the Tanzanian gas demand for the generation of electricity exceeds 105 million cubic feet a day,” said Oswald Mutaitina, finance and business development manager at Tanzanian gas and electricity company Songas.

“We currently produce 70 million cubic feet of gas per day, which we want to double. In order to do so, we need to expand and upgrade the infrastructure,” Mutaitina explained, adding that this will cost 60 million dollars.

The company, which is partially owned by the government and various private entities, gets its gas from the Songo Songo island. The island is situated off the coast from Tanzania’s commercial capital Dar-Es Salaam and holds 1.2 trillion cubic feet of natural gas.

Apart from tapping off gas and selling it to other power producers, Songas also produces electricity. According to the company’s statistics, it feeds 180MW into Tanzania’s power grid.

The growing demand for power generated from gas instead of conventional fuels is linked to the price tag.

“Gas is cheaper compared to liquid fuels such as diesel and kerosene. In addition, the gas we use in our power plant is a local product and does not, as opposed to liquids, have to be imported,” Mutaitina told IPS.

“Therefore we are not dependent on the fluctuations of the international fuel markets.

“As a result we are able to provide cheap electricity, at 0.06 dollars per kilowatt hour,” he added. Electricity generated by Independent Power Tanzania Ltd or the diesel-fuelled Tsavo in Kenya costs respectively 0.11 dollars and 0.12 dollars per KWH.

Another benefit, Mutaitina added, is that the planned expansion will improve Tanzanians’ electricity access. “Currently, only 10 percent of the country has electricity,” said Mutaitina. “This will improve over the coming years.”