BRAZIL: Link to the Pacific: Road, Rail or Ship?

RIO DE JANEIRO, Nov 24 2010 (IPS) - A land route to the Pacific, long coveted by Brazil, would not reduce the cost of transporting Brazilian exports to China and other markets in Asia and would not make them more competitive, as advocates of paving roads and building bridges through the Amazon jungle argue. 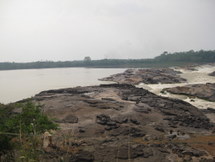 “It’s a myth,” said Olivier Girard, basing his assertion on the Competitive North Project, a study by his company, Macrologística, on the transport infrastructure in Brazil’s Amazon jungle states.

The study, carried out for the National Industrial Confederation, concludes that rivers and waterways are the best way to reduce transport costs.

But “everything will change” if neighbouring Peru goes ahead with a plan to build a railway running from the northern Peruvian port of Salaverry to the Brazilian border, Girard’s partner in Macrologística, Renato Pavan, told IPS during a meeting in the company’s headquarters.

Peruvian President Alán Garcia signed a new law on Nov. 8 that declares the construction of the railroad — officially named the “Bioceanic Geopolitical Project” because it would eventually link up to routes in Brazil leading all the way to the Atlantic — a matter of “public necessity and national interest.”

From the Pacific port of Salaverry, which is in the city of Trujillo, 560 km north of Lima, the railway would run almost directly east to the border near Cruzeiro do Sul, a city in Brazil’s extreme northwest.

For now, Cruzeiro do Sul can only be reached by highway BR-364, which runs east to west across Brazil’s southern Amazon jungle; the Juruá River, one of the major tributaries of the Amazon River; or plane.

A railroad in Peru, linking the northwestern Brazilian state of Acre with the Pacific Ocean, “would modify the geography” of the Amazon region and require a revision of the calculations made by Macrologística, which were based on the existing road connections to the ocean, Pavan acknowledged.

The 1,650-page study estimates the total logistics costs for exports and imports for the Amazon region, made up of nine Brazilian states, at 10 billion dollars a year. To cut costs, it identified 151 necessary public works and infrastructure projects, 39 of which would be in hubs for cross-border traffic.

In order to design a more feasible programme, the firm selected the 71 most important projects, 27 of which involve waterways. It says 34 of the projects could get underway soon with an investment of about 3.9 billion dollars, the cost of which would be recouped in less than four years, by reducing annual costs by 11 percent.

Only around one-third of the projects identified by the company are included in the government’s Accelerated Growth Programme, a strategy involving infrastructure and social investments, indicating a discrepancy in focus.

Macrologística carried out a “systemic” study, with integrated economic objectives, while the government’s plans are designed sector by sector, without a comprehensive overall vision, according to Girard.

He said the study concluded that “International (road) corridors do not contribute to a reduction of total costs,” although they are important for the integration of the countries involved.

Road links between Peru’s Pacific ports and the most productive parts of Brazil’s Amazon jungle would be long, over 2,000 kilometres, and would represent much higher costs than sea and river transport, said Girard, lead author of the study, which took more than a year to produce and included visits to seven border countries.

Transportation by road would not shave days or weeks off the time involved, with respect to river transport or maritime transport through the Panama Canal or around the southern tip of South America, as claimed, the report says. Transfers, red tape and the challenges of crossing the Andes mountains reduce the time difference, said Girard, an expert in logistics.

Moreover, trucks cannot carry, especially over the Andes, cargo of the scale that ships can handle, and that markets in Asia demand. “Land transport will always be more costly” in this case, Girard argued.

Along the chosen route between the port of Salaverry and the border of the state of Acre, to the west of Rondonia, the mountains are not so high, with a maximum altitude of 1,800 metres, Baptista pointed out.

And China will undoubtedly invest in the railroad, because of its interest in minerals from Peru and grains from Brazil, he added.

But Pavan clarified that the railway is a “medium or long-term alternative.”

Brazil’s closest railroads are about 2,500 km away by road from the border that the Peruvian railroad would reach.

However, it is assumed that if it goes forward, the Peruvian project would prompt the Brazilian government to also invest in the railway option.

For now, the best alternatives are within the Amazon jungle itself: the large rivers that offer the cheapest, if longer-distance, form of transportation, said Girard.

Of all of the possible routes examined, the study mentions nine “priority hubs,” because they offer the best results — including four waterways, two railroads and three highways.

Creating a navigable waterway along the Juruena and Tapajós rivers — which form a basin where agriculture, mainly soy, has grown up, and which run into the Amazon River — would be the investment with the best returns, Girard said.

The second best would be the waterway based on the Paraguay and Paraná rivers, which run into the Río de la Plata estuary between Argentina and Uruguay to the south.

All of the high priority infrastructure projects — the creation or improvement of waterways, the paving or repaving of roads, and the expansion of railway networks — are principally aimed at transporting agricultural products and minerals from the southern and eastern parts of Brazil’s Amazon rainforest. That is where production, as well as deforestation, are concentrated in the country’s Amazon region.

But it would be neither an easy nor a fast undertaking to make the Juruena River and the Tapajós River — formed by the junction of the Juruena and Teles Pires Rivers –navigable. The waterway would require the construction of hydroelectric dams and sluices.

“There are major obstacles, like the Augusto Falls” in the Juruena National Park, a conservation area, said Laurent Micol, head of the Instituto Centro de Vida, a local environmental organisation. The initiative would trigger conflicts between energy interests and the defence of the environment and biodiversity, he told IPS.

Direct impacts on indigenous communities hinder approval of infrastructure projects, because the legislature must sign off on them, and the affected communities themselves also have to give their consent.