SANTIAGO, Nov 26 2010 (IPS) - Cactus, bushes, flowers and countless other plants are taken out of Chile daily to be studied, improved, marketed and patented. Due to the lack of regulations, the country can only stand by and watch them go. 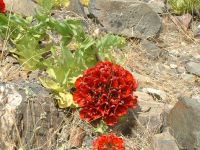 “The departure or flight of biological material from Chile occurs daily and there is no legal framework to regulate it,” Pedro León, an expert with the Ministry of Agriculture’s research institute, INIA, told Tierramérica.

More than 11 percent of Chile’s native flora species are sold abroad as seeds or nursery plants, with no payment of royalties. This situation involves at least 586 species and 6.5 percent face extinction, according to a study published in March in the INIA journal Tierra Adentro.

Compared to other Latin American countries, like Brazil, Ecuador and Peru, Chile does not have a big variety of native plant species: about 5,200. But a great number — about 2,500 — are endemic to Chile alone, given the country’s relative geographic isolation, with the long Pacific Ocean coast to the west and the Andes Mountains to the east.

“That means they have unique chemical compounds,” for example, that make them resistant to drought or cold, María Isabel Manzur, of the non- governmental Sustainable Societies Foundation, told Tierramérica.

About 30 percent of Chilean flora has known or potential uses as food, medicine, forage crops or fuel.

Among the plants that INIA identified as being sold in other countries, there are cactus species of the Copiapoa genus, the lion’s claw flower (Leontochir ovallei) and glory-of-the-sun flower (Leucocoryne).

The “Chilean guava” (Ungi molinae), a bush whose berries have food, cosmetic and medicinal uses, is today grown in Australia and New Zealand, although INIA has developed and patented two improved varieties in Chile.

A well-known case is that of a microorganism, Streptomyces hygroscopicus, discovered in the 1960s on Easter Island by Canadian researchers. From it, scientists have extracted rapamycin, which has antibiotic, antifungal, immuno-suppressor and anti-ageing properties.

“The seeds leave the country because there are people or institutions that sell them overseas to meet the demands of international seed companies, or nurseries or individual collectors,” said León, who is in charge of INIA’s Vicuña Experiment Centre Seed Bank.

The authority to regulate access to a country’s genetic resources lies with the government and should be subject to national legislation, states the Convention on Biological Diversity, signed in 1992 and ratified by Chile in 1995.

The Convention also promotes the fair and equitable distribution of benefits arising from the use of those resources, especially among rural dwellers and indigenous communities, who have amassed knowledge about the properties of plants, animals and even microorganisms.

But it has taken the Convention’s member countries 18 years to adopt a specific protocol on genetic resources.

And 15 years after ratifying the treaty, Chile has yet to draft legislation on the matter. Because no laws are being violated, León prefers to talk about the “flight” of genetic material instead of “biopiracy,” as the practice is also widely known.

The flowers of the genus Alstroemeria, like the lily of the Incas, are another example of this process. Several wild species were taken from Chile to the Netherlands, where they were improved through crossbreeding — and now the Netherlands is an exporter of the flower.

Due to excessive extraction from their natural habitat, some plant species now face extinction, like cactus species native to Chile’s northern coastal desert. The true scope of the problem is unknown because only three of Chile’s 15 regions have “red books” tracking the conservation status of their flora and fauna.

INIA, meanwhile, has four germplasm banks, which collect seeds, tissue cultures or plant collections that hold the genetic material of each species. The institute is opening a fifth site to preserve different Chilean varieties of the potato.

According to León, Chile maintains about 60 percent of its agricultural diversity and 20 percent of native flora, with the goal to reach 45 percent by 2020. But to protect a plant sample can cost 2,000 to 3,000 dollars, and preservation of fruit species is only in its initial stages.

In order to preserve the array of species, INIA wants people or institutions to report when they are transferring genetic materials abroad. Botanical gardens, for example, sign “access contracts.”

But most biological samples leave the country with only a certificate from the Agricultural and Livestock Service, which states they are free of disease or pests.

In the last few years, Manzur, of the Sustainable Societies Foundation, has seen several drafts of laws aimed at regulating access to genetic resources. “But none of them has reached port because there is no consensus and because one government term ends and the next one has different priorities,” she said.

Meanwhile, Brazil’s law on biodiversity is “quite strict,” according to experts. But while it prevents genetic materials from leaving the country, it also creates obstacles for research within the country. Costa Rica and the Andean Community (Bolivia, Colombia, Peru and Ecuador) have similar regulations.

The Nagoya Protocol on Access to Genetic Resources and the Fair and Equitable Sharing of Benefits Arising from Their Utilisation, was agreed Oct. 29 in the Japanese city during the latest meeting of the Convention on Biological Diversity. It could be the push Chile needs to fill the legal void, according to Manzur.

“Once and for all we have to appreciate the value of our natural wealth, designate the necessary resources to conduct an inventory, and to conserve them and utilise them in a sustainable way,” said INIA’s León.

“Chile participated in the Nagoya Protocol negotiations. The final text will be analysed by the Executive branch’s institutions before determining whether to sign it,” a source from the Foreign Ministry told Tierramérica.

The Nagoya Protocol will be open for signatures from member countries from Feb. 2, 2011 to Feb. 1, 2012, and will enter into force once 50 countries have ratified it.

According to the Ministry source, the government is again considering “a law on this matter.”

*This story is part of a series of features on biodiversity by Inter Press Service (IPS), CGIAR/Biodiversity International, International Federation of Environmental Journalists (IFEJ), and the United Nations Environment Programme/Convention on Biological Diversity (UNEP/CBD) — all members of the Alliance of Communicators for Sustainable Development (www.complusalliance.org).