CANCÚN, Mexico, Dec 11 2010 (IPS) - “We are the coldest country in the world… so global warming is good for us. The warmer it is, the bigger the harvests… They talk about stopping deforestation of the tropical jungles to fight climate change, but we don’t have tropical jungles.” 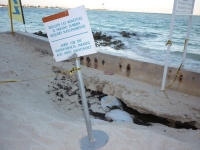 "Paradise also needs maintenance," states a sign outside a Cancún hotel, where sand is eroding away. Credit: Diana Cariboni/IPS

The frankness of Russian lawmaker Viktor Shudegov revealed an “inconvenient” truth, the ongoing lack of awareness about global warming, in a parallel meeting to the climate change summit hosted by Mexico in the resort city of Cancún, Nov. 29 to Dec. 10.

Shudegov synthesised how difficult it is for public opinion in a country like Russia to take up the challenge of climate change, despite being the most serious global problem — according to scientists — that humanity will face this century.

This dynamic, in which urgent domestic problems take the fore — like the economic crisis afflicting nearly the entire industrialised world — means that attempts to adopt a binding global pact to reduce climate-changing gas emissions repeatedly crumble.

And the Cancún summit, officially known as the 16th Conference of Parties (COP 16) to the United Nations Framework Convention on Climate Change, was no exception.

A driving force of the UN-led negotiations for years has been the effort to attract the private sector, offering more and more opportunities for business in the still nascent “green economy.”

The inclusion of carbon capture and storage (CCS) systems among the financeable mechanisms for reducing the emissions of greenhouse gases is one example of that trend.

It means extracting carbon dioxide, one of the leading greenhouse gases, and sequestering it in “sinks,” deep in the oceans, in forests and underground. Those investing in such deals would then be able to trade emissions credits on the carbon market.

But many environmentalists and scientists believe that the carbon market is getting ahead of itself.

“Carbon capture and storage technology has not been proved yet. It is not ready to be put into practice. It is a further way of moving away from renewable energies, moving away from mitigation, to some kind of technology that would not solve the problem,” Nigerian Nnimmo Bassey, chair of Friends of the Earth International (FOEI), told Tierramérica.

“What is coping with global warming? Reducing the carbon launched into the atmosphere. So why don’t we leave the carbon where it belongs… in the ground?” said Bassey, one of the 2010 winners of the Right Livelihood Award, known widely as the Green Nobel.

Greenhouse gases are released by the combustion of petroleum, natural gas and carbon, and in deforestation, agriculture, land-use changes and industrial production.

The biggest emitters, led by China and the United States, cannot reach an agreement on goals for reducing emissions that would keep the global average temperature increase under two degrees Celsius.

If we cross that threshold, say climate scientists, global warming will reach a tipping point that would unleash catastrophic changes.

Adopting a green or low-carbon economy means dramatically modifying the way that most of humanity conceives of economic activity.

At first glance, it is easier to begin by halting deforestation of the world’s forests and jungles, responsible for 18 percent of global greenhouse emissions.

The REDD+ initiative (Reducing Emissions from Deforestation and Forest Degradation), which attracted a lot of attention at COP 16, calls for rich countries to finance forest-saving actions in developing countries, benefitting local actors, and rural and indigenous communities in particular.

It is not true conservation, but rather a way of reducing emissions, according to the Nigerian expert. When a forest is included in the mechanism, it will prevent the local communities from utilising it as they have for their livelihood, “because whoever is in the forest will have to assure that the carbon stock would be retained.”

To achieve the goal of conservation, “monitoring and transparency are critical, as it is for ensuring respect for the rights of indigenous and rural peoples,” Quintero told Tierramérica.

Despite all the problems, the UN system of negotiations remains the only one possible. “The diplomatic process is a little slow,” but how else can the interests and positions of the 192 countries party to the Convention on Climate Change be taken into account, she said.

In Quintero’s view, the different stances have been drawing closer towards common ground that can serve as the basis for a broader treaty. And much of that progress is the result of the way that host Mexico led the negotiations — not only in Cancún, but over the course of the year.

One pillar on this common ground is to provide funds to poor countries for confronting their new climate and weather realities, adopting new technologies and paying for the enormous losses resulting from more frequent and intense weather disasters.

But once again, there are clashing interests. At COP 15, held last year in Copenhagen, the pledge was to deliver at least 30 billion dollars a year, “and not even the 30 billion is coming,” said Bassey.

According to the FOEI leader, the rich countries have done all they can to move money set aside for aid to use instead as loans, “to make profits out of the misery of the poor countries hit by global warming.”

This does not mean not just looking for funds, it means “rich countries paying their climate debt,” said Bassey. “European countries for years have been colonising the atmosphere with their carbon emissions,” he added.

There is an enormous gap between the climate justice Bassey is seeking and the route of “the possible” pursued in the official negotiations.

And there is little hope of addressing the central question — how to halt climate-changing emissions — until the next summit, COP 17, in Durban, South Africa.

“The biggest and most powerful nations on earth simply aren’t paying attention to physics and chemistry,” said Bill McKibben, founder of global climate campaign 350.org in a statement.

Civil society is “not big enough yet to beat the fossil fuel industry and its allies, but we’re gaining,” said McKibben.

“What is the point of all theses meetings during two weeks,” wondered Bassey. “We are heading nowhere. And it shows the lack of recognition of the seriousness of the warming crisis.”

“When the impacts really multiply, when the climate hits a tipping point, not even the rich countries will escape the disaster that will follow,” he warned.