ADDIS ABABA, Dec 13 2010 (IPS) - Nigist Abebe has grown in confidence over five years on the job. Today she is one of 34,000 rural health extension workers at the heart of Ethiopia’s primary health care strategy. 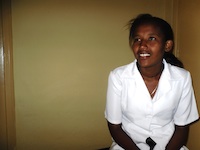 Five years ago, Nigist Abebe had difficulities winning the trust of mothers in her door-to-door services Credit: Omer Redi Ahmed

One of her most important functions in Dengo Furda Kebele, the village she was born and raised in, is supporting women through pregnancy and childbirth.

“I counsel mothers in the village about maternal and child health, administer proper medication, prepare pregnant women for delivery. In general, I encourage them to get free medical services that would save their lives,” she told IPS.

When Nigist started the job, she says, Dengo Furda was lost half a dozen mothers in childbirth each year, roughly in line with the national average. She says there has been a clear improvement.

An estimated 94 percent of Ethiopian mothers give birth at home and in 2005, when the Health Extension program started, 720 mothers died per 100,000 live births.

Nigist, now 23, applied for the one-year training to become a health worker six years ago, immediately after she completed grade 10. Her friends advised her that it could be a good job opportunity.

She attended a technical and vocational training institute, where she studied 16 areas covering malaria, HIV, and maternal and child health.

She graduated in 2005 and became one of three new extension workers serving the thousand households of Dengo Furda.

In 2009, she was recruited for an additional month-long training on pre and post-natal care and safe delivery by the district health department.

Now she sees every pregnant woman in the village – volunteers alert her to every pregnancy in the kebele, so if they don’t come to her, she goes to see them.

Before her training last year, she says she helped mothers during labour without proper knowledge of safety, appropriate medication and the warning signs of potential complications.

“We didn’t know the procedures. I now feel confident with the service I provide to these mothers and know when it is beyond my capacity,” she said.

For example, she administers misoprostol tablets to control life-threatening bleeding after childbirth, which accounts for 22 percent of maternal deaths in Ethiopia.

Nigist readily identifies women who are at greater risk of bleeding: under-18 pregnant mothers and women who have had many children close together are the chief ones, she said.

When she comes across a mother with early indications of more serious complications, Nigist refers them to a better-equipped health centre ten kilometres away, where trained obstetricians who can help a woman deliver safely.

Nigist and her counterparts at other health posts evaluate every pregnant woman and decide if she should go to a health centre to labour if there are signs of complications. After childbirth, the extension workers visit mother and child at home, ensuring that a vaccination schedule is followed and monitoring children’s nutrition.

Though statistics on maternal deaths are not available in East Shoa Zone where Nigist works, the scheme is believed to have reduced the maternal mortality rate.

“I can’t exactly state the rate of reduction, but I can tell you for sure maternal death has gone down,” Diriba Degefa, head of health department at the zonal level, said.

The East Shoa Zone, with a population of 1.3 million people, has increased the number of health centres – like the ones Nigist refers risk-cases to – in its 13 districts from 12 to 52 in five years. The completion of four more, already under construction, will enable it to meet the government’s target of one health centre for every 25,000 people by June 2011. About 299 health posts with two health extension workers each have been set up throughout the zone. Each health post is responsible for every 5000 people (mostly a kebele population) and every five health posts are linked to health centre for referral as well administrative supervision.

When the health extension workers were first deployed, villagers in Dengo Furda and the wider Boset district didn’t believe they had the necessary skills or knowledge to improve maternal health. The experience of the past five years has changed that.

Nigist seems to like what she does; her main desire is to improve her knowledge and skills.

“Though it is difficult here, I will still continue to work. But I would really be happy if we get further education and training,” she said. “Saving the lives of mothers and children is really fulfilling.”