KARACHI, Pakistan, Dec 27 2010 (IPS) - She is already eight months old, but Aiman Azam can neither sit up nor clutch anything with her tiny hands. She cannot even hold her neck up or roll on her back. All she does is moan. 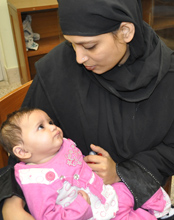 “The last time she smiled, cooed, and gurgled was five months ago, when she was just three months old,” says her mother, Maria. It was also around that time that Aiman developed a fever.

It took a couple of trips to doctors before baby Aiman was diagnosed as possibly having meningitis, an infection of the lining surrounding the brain and the spinal cord.

There are two types of meningitis: viral and bacterial. Aiman has been afflicted with bacterial meningitis, which often leaves those who survive permanently disabled – paralysed, hearing impaired, and even brain damaged.

Every year, too, an estimated 23,000 children die of bacterial meningitis in Pakistan. But Asif Khowaja, public health scholar at the paediatrics department at Karachi’s Aga Khan University Hospital (AKUH) says, the true burden of the disease remains invisible because of “limited laboratory facilities, prevalent use of antibiotics, and poor health-seeking behaviours in Pakistan”.

AKUH is currently conducting research to assess the impact of the introduction of a vaccine against the Haemophilus influenzae type b (Hib) bacterium, which is the leading cause of childhood bacterial meningitis in this South Asian country.

The research is also looking into the neuro-developmental outcomes among cases of bacterial meningitis.

The researchers hope that the results would underscore vaccine effectiveness against bacterial meningitis and estimate the burden of meningitis in Pakistan. If everything goes well, they say, the results could strengthen the advocacy argument for the sustainability of the Hib vaccine under Pakistan’s Expanded Programme on Immunisation (EPI).

“We are to enroll approximately 200 cases of bacterial meningitis, and five times the number of healthy age-matched children as the control group to establish dose specific vaccine effectiveness,” says Khowaja. “About 100 cases and 200 healthy children are also being evaluated for neurological and developmental outcomes.”

So far, the researchers have recruited half of the sample size from each group. According to Khowaja, the vaccine coverage among both groups is below 50 percent, a fact that only highlights the need for community awareness regarding meningitis and the availability of a vaccine against Hib.

Health professionals say public awareness is crucial to maximise the benefit of having the EPI and the Hib vaccine.

The family of baby Aiman, for example, had not known that the Hib vaccine was available for free through the public health system. Azam Khan also admits that before Aiman was diagnosed as possibly having the meningitis, he was only vaguely aware of the disease. Not one of his older children – all boys, aged seven, four, and two – had been given the vaccine either.

Pakistan introduced a new combination vaccine to protect its-under five population against Hib bacterium in January 2009. At present, the EPI is providing the three doses of Hib vaccine free of cost to children less than two years of age.

In 2011, the health ministry plans to introduce the vaccine against the Streptococcus pneumoniae bacterium that is yet another cause of bacterial meningitis.

Both the Hib and the pneumococcal vaccines are available in Pakistan, but are far too expensive for most people. The Hib vaccine, for instance, costs 1,200 rupees (about 14 dollars) per dose. An infant would need to be given three doses at six weeks, 10 weeks, and 14 weeks.

EPI deputy manager Dr Agha Ashfaq says that the introduction of the vaccine via the state health system “will not only reduce the disease burden, but will also considerably contribute towards achieving the fourth Millennium Development Goal (MDG), which is to reduce under-five mortality by two-thirds”.

AKU Medical Centre paediatrics head Dr Zulfikar Bhutta says that having the Hib vaccine, and later the pneumococcal vaccine, available through the state health system is indeed admirable. But he says these will not reach those most in need, largely because the routine immunisation coverage is dismal.

Khowaja echoes this, noting that the current promotion of the vaccine is negligible. To get rid of meningitis, he says, a vigorous campaign is needed. “It must be taken door-to-door, the way anti-polio campaigns are carried out,” he stresses.

Health professionals say this is one way to ensure that the efforts of the cash-strapped health ministry to provide 15 million doses of the Hib vaccine alone per year would not come to naught.

The vaccine is being co-financed by the health ministry and Gavi, a Geneva-based public-private partnership aimed at improving health in the world’s poorest countries. Gavi is committed to the initiative until 2015. But EPI’s Ashfaq says, “Once Gavi leaves, we will be able to carry on just the same.”

Indeed, there is even a plan to reach over 90 percent of under-fives within the next two years, says Bhutta.

“We are trying to bring all stakeholders together to agree on a national plan,” he says. “There will be money, a lot of it for vaccines, but we need to ensure that we spend it wisely.”