Malnutrition Has an Indigenous Face in Peru

LIMA, Jan 18 2011 (IPS) - Indigenous children under five in Peru’s highlands regions still bear the brunt of chronic malnutrition, even though local authorities in those areas received millions of dollars worth of taxes between 2006 and 2010 from the mining companies operating there. 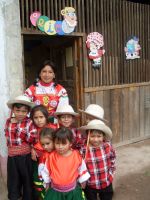 Two studies by the Peruvian office of the United Nations children’s fund, UNICEF, titled “Estado de la Niñez Indígena en el Perú” (The State of Indigenous Children in Peru), published in 2010, and “Estado de la Niñez en el Perú” (The State of Children in Peru), to be released in the next few weeks, show that chronic malnutrition was significantly reduced in rural areas between 2005 and 2009, from 40 to 33 percent.

But when the statistics are broken down, it becomes clear that malnutrition was reduced to a much lesser extent among indigenous children, even though that population group is a stated priority of the policies of the government of Alan García, in office since 2006.

The national chronic malnutrition rate for children under five is 18 percent.

But in the Andean region of Huancavelica in southern Peru, 56 percent of all children under five are indigenous, and 43 percent of the native children suffer from chronic malnutrition. And in the neighbouring region of Apurímac, 61 percent of children are Indians, and 29 percent of them are chronically malnourished, a problem that leads to stunted physical and intellectual growth.

Huancavelica and Apurímac obtained relatively limited revenues from the “canon minero” tax paid by the mining companies between 2006 and 2010 — 29.5 and 17 million dollars, respectively, according to the Ministry of Economy and Finance — which could help explain the limited progress made.

But it is much more surprising that chronic malnutrition levels remain so high in the region of Cuzco, which took in 212.5 million dollars in mining taxes in that period:. In that region, 45 percent of children under five are indigenous, and 32 percent of them are chronically malnourished, according to UNICEF.

And Cuzco is not the only case.

The Andean region of Ancash in northwestern Peru and the altiplano region of Puno in the southeast took in 1.28 billion and 238.6 million dollars, respectively, the Ministry of Economy and Finance figures show. But the funds have had little impact on indigenous children.

“Chronic malnutrition in rural areas has declined considerably in the Andean regions, from 39 percent in 2000 to 30 percent in 2009, and from 30 to 22 percent in Amazon jungle areas,” Lena Arias, one of the UNICEF researchers who produced the 2010 “Estado de la Niñez Indígena en el Perú” report, told IPS.

“But if we look at the six regions where 25 percent of the country’s indigenous children are concentrated, the chronic malnutrition rate among children under five is higher than the national average of 18 percent,” she said.

“Although malnutrition has clearly been reduced, the gap between rural and urban, between the poor and the not-so-poor, between indigenous and non-indigenous people, is still wide,” said Arias. “Rural indigenous children are still the hardest-hit.”

In a few weeks, UNICEF will publish “Estado de la Niñez en el Perú”, a new report on the situation of children in Peru, which will highlight the most significant advances in health, particularly with respect to the sharp reduction in infant and maternal mortality.

But there are pending challenges.

“The gaps are large and have widened, especially in relation to the situation in indigenous populations,” Mario Tavera, a UNICEF health officer in Lima and one of the authors of the report, told IPS.

When asked why mineral-rich regions that have benefited from millions of dollars in mining royalties have failed to considerably bring down malnutrition levels among indigenous children, Tavera said the question is not as simple as whether or not funds are available, but is based on a deeper underlying issue: what specific public policies have been put in place.

“Economic funds are a good foundation for improving social conditions of the population, especially among children, but the availability of funds or an increase in revenue does not guarantee an impact on social indicators,” he said.

Epifanio Baca, a researcher with the Grupo Propuesta Ciudadana, a coalition of 11 local NGOs, said the problem must not only be blamed on the central government, but on regional and local governments as well.

“They are not fulfilling their duties, even though in many cases they have the necessary funds to do so,” Baca told IPS.

“Regional and municipal authorities emphasise spending on infrastructure, which does help reduce chronic malnutrition,” he said. “But it is also important to dedicate funds to programmes that, for example, are working to get the indigenous population to change some dietary and hygiene habits that have an influence on chronic malnutrition.”

Baca underscored that in the regions with enormous inflows of mining taxes, 33 large mining companies promised in 2007 to pay a “voluntary contribution” of 178.5 million dollars a year for five years into a fund for fighting poverty. The contributions were in place of royalties and a tax on windfall profits generated by high metal prices during García’s five-year term.

“It’s a complex problem that not only involves the state,” Baca said.” For example, mining companies like Xstrata Tintaya, Barrick Gold and Cerro Verde, which provide significant voluntary contributions, do not even report on the impact of that money in the local communities. Apparently they’re not interested.”