AFRICA: Billions Lost to State Coffers Due to Tax Leniency

PARIS, Feb 18 2011 (IPS) - Bad governance and the persistence of the tax avoidance industry allow billions of dollars of profit to be siphoned out of Africa, untaxed, every year. 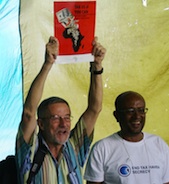 For the past 25 years, tax revenues in most African countries have missed even the low target of 15 percent of gross domestic product, far less than rich countries’ average of 35 percent, according to a recent report of the Tax Justice Network’s Africa section.

Titled “Tax Us If You Can – Why Africa Should Stand up for Tax Justice”, the report places the blame mostly on bad governance, whether African or international, and on the tax avoidance industry. The Tax Justice Network is an international independent organisation doing advocacy on tax regulation.

“Today, 80 percent of Africa’s exports consist of primary commodities. African governments depend heavily on the resource rents from these commodities but many are exempt from taxation,” the report, released on Feb 14, points out.

Multinational companies operating in African economies, including those of least developed countries, are granted massive tax exemptions by under- resourced, inept or simply corrupt tax officials, according to Khadija Sharife, lead author of the report.

“Multinationals use the very same systems of secrecy that human and wildlife traffickers, arms dealers, dictators, and autocratic regimes depend on in order to survive and thrive,” she explained to IPS.

Tax exemptions, tax holidays and deferments; ridiculously low rates of royalty payments by companies exploiting the continent’s bountiful natural resources; and under-priced access to water, timber and land translate into money diverted away from the empty coffers of African states.

The Tax Justice Network gives the example of a deal concluded in the Ethiopian state of Benishangul Gumuz. A five-year exemption from corporate income tax resulted in an annual tax loss to the treasury estimated at 12 million dollars.

Similarly, by the Network’s estimate, in neighbouring Kenya the government only manages to collect 35 percent of the corporate income tax required by national law.

The OECD is the Organisation for Economic Cooperation and Development, representing wealthy states.

African governments have a long history of granting fiscal concessions to the privileged, it claims. “Egypt’s famed Rosetta Stone, created in 196 BCE, was an agreement granting a tax exemption to priests, and certain reductions to the military and other ruling classes, including traders approved by the king,” according to the Network.

According to Global Financial Integrity, a programme of the U.S.-based Center for International Policy which studies cross-border flows of illegal money, the cumulative stock of illicit financial flows from Africa amounted to 854 billion dollars between 1970 to 2008, or about 22,5 billion dollars each year.

As a consequence, the burden of taxes falls on the African citizen. Because borders are one of the few effective tax collection points, tariffs are rigorously enforced, which holds back regional economic integration.

During the severe drought that struck the Horn of Africa in 2005, while the region’s governments were pleading for food assistance, it took some authorities more than three months to scrap the import tax on desperately needed foodstuffs.

“Data, figures and analyses are hard to come by, which keeps the issue out of the news and off African governments’ radar screens,” Alvin Mosioma, coordinator of Tax Justice Network Africa, told IPS from Nairobi, Kenya.

“African civil society took the matter to the African Union last August and we have lobbied the United Nations Economic Commission for Africa,” Mosioma says. “The need for better tax governance is identified, but it still needs sustained emphasis,” he adds.

The 16 countries, which compose the Economic Community Of West African States (ECOWAS), have begun working on minimum tax and royalty rates required for the mining and oil and gas industries. But the initiative has slowed down, according to Mosioma.

More worryingly, some African countries seem tempted to use or become tax havens themselves, which would facilitate the avoidance of profits even more.

“The use of Mauritius, a secrecy jurisdiction, by New Reclamation, a South African corporation exploiting diamonds in Zimbabwe as part of their joint venture with the Zimbabwe Mining Development Corporation, is very instructive,” argued Sharife.

“Notwithstanding the nature of the ruling ZANU-PF, whether or not the diamonds are classified as ‘blood diamonds’, corporations utilising Mauritius do so because they want to access services such as banking secrecy and tax exemption,” she explained.

“Governments commercialising sovereignty to act as tax havens have blood on their hands,” Sharife concluded.