ABIDJAN, Mar 7 2011 (IPS) - The U.N. has announced that some 200,000 people have already fled the Abobo neighbourhood, in the north of Abidjan. Each morning for a week now, luggage on their backs, bundles on their heads, the sick riding in wheelbarrows, new borns cradled in their arms, thousands of people have fled Abobo on foot. 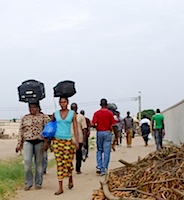 The U.N. has announced that some 200,000 people have already fled the Abobo neighbourhood, in the north of Abidjan. Each morning for a week now, luggage on their backs, bundles on their heads, the sick riding in wheelbarrows, new borns cradled in their arms, thousands of people have fled Abobo on foot.

It was in Abobo, a populous quartier generally supportive of the man internationally acknowledged to have won the presidential elections, Alassane Ouattara, where women marching to demand the exit of Laurent Gbagbo were violently attacked on Mar. 3. At least six women were killed, according to witnesses.

Where people have remained behind, they have been deprived of food by the closure of markets. Water and electricity supplies have been cut off and schools are effectively closed throughout the territory.

In the west of the country, according to international humanitarian organisations, around 65,000 Ivorian refugees have crossed the frontier and been registered in neighbouring Liberia in the last two weeks.

All of these are people fleeing the escalating violence and confrontation over the past two months between the two rival parties who claim victory in the presidential election of November 2010 in Côte d’Ivoire. Laurent Gbagbo was announced as the winner by the Constitutional council, while Ouattara was declared winner by the Independent Electoral Commission and is recognised as such by the international community.

“We have spent three sleepless nights because of fighting. It’s impossible to find food,” Adrienne Tohoua, 35-year-old mother of four told IPS. Tohoua abandoned her house in Abobo PK 18, a precarious precinct in the north of the capital, home to more than 50,000 residents.

“We left several people behind who didn’t know where to go and they would have been exposed to the fighting. Mortar shells fell among the houses and would have spared no one,” she said, tears in her eyes.

Three hundred refugees have taken shelter in the Saint-Ambroise de Cocody-Angré parish in the city’s northeast. Some 500 others have already passed through, on their way to other locations. Every day, displaced people file along the road towards this religious site.

“I have come eight kilometres to reach here. I’m going to rest briefly before returning to the road to reach my older brother who is already sheltering 13 people at his house,” explained Séraphin Téty, holding his sixty-year old father by the hand. “He suffers from hypertension, so we need to find a health centre so we can manage his condition.”

Many of the displaced lack the financial means to pay to flee. “I have a little in the bank, but it’s closed. I have to move part of my family to the village and I find myself unable to pay for it,” said Marcellin Tanoh.

According to Tanoh, his neighbourhood of Anyama, north-east of Abidjan, is also short of water, to the point that his family had not been able to take a bath for four days. Their store of three containers full of water, carefully reserved for drinking, is nearly exhausted.

This situation is worrying for humanitarian organisations and human rights defenders in the West African country, plunged into crisis since the rebellion in September 2002, and now aggravated by the post-election conflict.

On Mar. 1, the International Committee of the Red Cross in Abidjan said it was “concerned by the massive exodus of residents, mostly women and children”. The organisation revealed that many families are still trapped in their homes and have not been granted permission to leave the front line/zone of confrontation without paying or giving up personal goods to armed groups.

Meanwhile, the elderly, the sick and pregnant women are not able to move, said the Red Cross.

The joint chief of the regional delegation of the organisation, Phillippe Beauverd, notes that following the clashes in Abidjan in the last week of February between the Security and Defence Forces loyal to Gbagbo and an unidentified group of armed men, volunteers from the Red Cross attended to 34 people and evacuated 19 who were seriously injured.

“The situation is worse than deplorable that it’s the innocent population that pays the highest price for an electoral dispute,” said Gervais Boga, president of the Ivorian Foundation for Human Rights and Political Life, an NGO based in Abdijan.

“We are at the edge of a serious humanitarian crisis, and the different embargos imposed on the country, among them those relating to medicines, constitute a crime against humanity.”

Meanwhile, the African Union has extended by one month the mandate of a panel of heads of state charged with putting forward a binding solution on the two protagonists of the crisis. The United Nations believes the country is on the edge of civil war.