KAMPALA, Mar 5 2011 (IPS) - The four-year old African Union Mission in Somalia is fighting a desperate defensive action in support of a transitional government that is “corrupt and inept”, according to the International Crisis Group 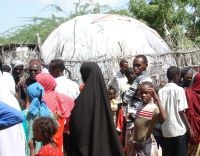 The four-year old African Union Mission in Somalia is fighting a desperate defensive action in support of a transitional government that is “corrupt and inept”, according to the International Crisis Group

As many as 50 soldiers belonging to AMISOM were killed in fighting at the end of February. AMISOM attacked Al-Shabaab, the Islamist group that controls many parts of Mogadishu as well as most of south and central Somalia, in a bid to expand the Transitional Federal Government’s influence and better protect its own bases.

But Ej Hogendoorn, Horn of Africa Project Director for ICG, says the mission’s real problem is the weakness of the administration it is in Somalia to protect.

Q: Uganda was the first country to deploy troops in Somalia in 2007. How is it possible that four years down the road, AMISOM hasn’t figured out what works and what doesn’t? A: Part of the problem is the Peace and Security mandate from the African Union is to support the transitional institutions. This mandate is constraining on the part of the troops in terms of what they can really accomplish.

Everyone thought that President Sheik Sharif was elected [head of the Transitional Federal Government (TFG) in January 2009], that he would be a credible president and do much more to reach out to other groups in Somalia. But his administration has not done much.

A number of people in the AU who we have talked with, agree with our conclusions on the mandate but the question would be how will a new mandate be implemented. And whether the AU agrees to a new mandate to support groups beyond the weak government of Somalia, it remains to be seen.

Q: The recent report published by the International Crisis Group indicates that Somalia’s TFG, which the African Union Mission (AMISOM) backs, is too corrupt and inept to bring meaningful peace to Somalia. Who can bring order? A: The TFG will not change unless it is forced. Our report sends strong signals to the TFG that if it doesn’t change, the international community should stop supporting it. The international community and AMISOM should be supporting local administrations in central and southern Somalia who are actually the ones providing services and security to the people.

So far the international interventions and attention have been geared towards the TFG.

Our report shows that the TFG has squandered the goodwill and support it received and achieved little of significance in the two years it has been in office.

Q: Do you think continued blanket support for a corrupt and inefficient government has alienated AMISOM troops from Somali civilians? A: The situation is more complex than that but that is very true.

AMISOM has been painted as a foreign occupier, as a foreign force not good for Somalia’s future. The TFG has done such a poor job to dispel this view. It has not explained to the people of Somalia the AU’s role in Mogadishu.

To some degree, the presence of AMISOM has had a reverse impact on security sector reform in Somalia. The reason the troops are there is to protect the TFG and this takes pressure off the government to actually develop and stand by itself.

The [internationally-backed] Security Sector Reform has been a failure; it is not even a top priority for this government.

Q: What achievements can one point to on the side of AMISOM in the last four years? A: Al-Shabaab has not taken the whole of Mogadishu. If it wasn’t for the AMISOM the TFG would have fallen long time ago.

The TFG has failed to act as an effective government. For the last two years AU mission has been stuck in a catch 22.

Q: Would that explain the battles for more territory in Somalia in the second half of February, which claimed the lives of over 50 soldiers – many of whose bodies are still in the hands of Al-Shabaab? A: You remember AMISOM has been protecting the Somali government in a small area in Mogadishu which has allowed Al-Shabaab enough room to attack and even send mortars to the AMISOM bases.

Things have become very difficult for the troops in terms of tactical perspective. It’s a bad set of choices they have got on their plate.

They decided to expand their security perimeter. As we see it, AMISOM could expand its presence in Mogadishu and the battle last week [beginning Feb 19] that’s what they were up to. It is by far the most capable force in Mogadishu.

About a year ago, the big problems was mortar shells reaching the compound of the AMISOM base and as the security perimeter has been expanded it becomes more difficult to protect troops. But as it expands its security perimeter, it exposes its troops to Al-Shabaab which explains why they suffered casualties in last week’s battle.

As AMISOM expands to other parts of Mogadishu, the TFG should provide support to those AMISOM soldiers but the TFG hasn’t.

AMISOM has tried alliances of convenience with some of the militia groups that are not supportive of Al-Shabaab to expand their presence but the cost is that these are not government forces, these are private militia groups.

Q: Many in Uganda – especially those who have lost their sons or daughters – question what the mission can deliver to Somalia . What would happen if Uganda and Burundi withdrew their 8,000 soldiers? A: There are two scenarios if the AMISOM withdrew from Somalia. First and most likely Al-Shabaab would defeat the TFG and take control of the whole of south and central Somalia to be able to set up training bases and expand their operations well beyond Somalia. They may even be able to expand to the north and north east and this would be a problem because then they could effectively launch their terrorism.

The second scenario in case of AMISOM going would be the TFG would be defeated but then Al-Shabaab itself would fail to govern Somalia and then it would all fall back into civil war. This would enable other neighbouring countries like Ethiopia to come back to being directly involved which would in turn make Somalia more radicalised.

Q: So what will happen if the AU doesn’t change its current mandate? A: I do hope the mandate of AMISOM is revised. The current status quo is unacceptable and if the mandate doesn’t change and the TFG doesn’t reform, Uganda and Burundi will be stuck in a quagmire.

I should mention that Al-Shabaab is not stupid. They realise they have time on their hands. They have tried to increase the price of UPDF and Burundian forces face through inflicting as many casualties as possible and of course with the Kampala bombings, they would like to force AMISOM to withdraw.

This is happening as we lack serious discussions on whether the TFG is the only partner in Somalia that AMISOM and the international community can work with.

There are groups like like Ahlu Sunna Wal Jama’a which AMISOM can work with efficiently. AMISOM must coordinate with all these groups instead of focusing on a European-style of central governance based in Mogadishu, which clearly hasn’t worked.

Currently Al-Shabaab is not working with these groups, so to concentrate their support on a corrupt government means they will not deliver peace to Somalia any time soon.