KAMPALA, Mar 5 2011 (IPS) - On Feb. 19, the morning after Uganda’s presidential elections, Michael Muhamuza called home and spoke to his cousin and his brother; a regular check-in with the family. 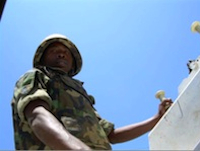 The 25-year-old was calling from Mogadishu, where he was part of the Ugandan contingent deployed under the African Union Mission to Somalia (AMISOM).

“He would call at least twice a week,” said Mwijukye Mugisha, his older brother. “That day he called early in the morning as we were milking the cattle. He told us, please pray for me, anything can happen any time here in Somalia.”

That was the last time the family heard from Muhamuza, a private in the Uganda People’s Defense Forces, registered as No. R/A 214782. A day after the phone call, the family heard on the radio that an unknown number of soldiers serving with the African Union Mission in Somalia (AMISOM) had been killed in the Somali capital.

When news of casualties broke on the radio, Muhamuza's family did not know whom to contact. Mugisha went to the town of Ishaka, about 30 kilometres away. With the expansion of the internet into even small towns in Uganda – and the increasing use of the worldwide web by insurgents – the Ugandan government's reluctance to communicate promptly and honestly with the families of dead or wounded soldiers is badly exposed.

Online in Ishaka, Mugisha quickly found the news he was afraid of. "I opened two pages and there they were. I did not need a second thought," he said. Photos of casualties from the recent fighting had been posted on web sites maintained by Somali bloggers and Al-Shabaab.

I counted several bullet holes in his body because the pictures seem to have been taken immediately, with the blood still very visible," Mugisha said. "His face was badly bruised, probably from dragging him in the streets."

A grief-stricken Mugisha found the images of his dead brother on Feb. 24; but when he paid a visit to army headquarters, the personnel office seemed to have no clue as to the names of the dead soldiers. They only later confirmed the soldier was missing in action.

When his body might be recovered and returned to the family is unknown.


AMISOM was created in January 2007 by the AU’s Peace and Security Council to back Somalia’s Transitional Federal Government (TFG). Uganda was the first country to deploy troops, three months later. Uganda still provides more than 5,000 of the AU’s 8,000 troops in Mogadishu.

The mission has not prospered. Four years on, Al-Shabaab and Hizbul Islam, the militant Islamist groups opposed to AMISOM and the TFG, have consolidated control over much of south-central Somalia and parts of the capital.

Al-Shabaab has not only bottled the transitional government in a small part of Mogadishu, regularly shelling AMISOM positions and mounting attacks on government officials, it fought a separate Ethiopian force to a standstill, ultimately driving it out of the country in early 2009. In July 2010, Al-Shabaab further demonstrated its power with a pair of deadly bombings in the Ugandan capital, Kampala, killing 75 and injuring scores more.

Ej Hogendoorn, Horn of Africa Project Director for the International Crisis Group, told IPS that Ugandan and Burundian troops are “in a catch-22″. The ICG is a non-profit organisation that works to resolve and prevent conflict; in February it published a report that argued the TFG is too corrupt and inept to ever govern Somalia.

Hogendoorn says the transitional government has failed to put forward a vision for the country, build up its own armed forces or even counter Al-Shabaab’s characterisation of AMISOM as foreign occupiers.

It’s a bad set of choices they have got on their plate… AMISOM could expand its presence in Mogadishu – and in the battle [beginning Feb. 19], that’s what they were up to,” he says. “It is by far the most capable force in Mogadishu. But as it expands its security perimeter, it exposes its troops to Al-Shabaab which explains why they suffered most casualties.”

Two weeks ago, the AU mission launched an offensive against Al-Shabaab in Mogadishu. AMISOM’s commander, Major General Nathan Mugisha, told a Mar. 5 press conference in Nairobi that AU forces had captured significant new territory in the capital, including retaking the former Ministry of Defence building and seizing trenches the Islamists used to resupply their front lines.

He declined to give official figures for casualties on either side, but according to the Associated Press, unnamed diplomats in Nairobi said that 53 peacekeepers – mostly Burundian – died in the offensive.

Combined with undetermined civilian casualties, the deaths of so many peacekeepers in the space of a few days – the Ugandan military had lost 37 soldiers in the previous four years – take the shine off any gains.

Recent refugees interviewed by Human Rights Watch in northern Kenya describe indiscriminate violence against civilians by both Al-Shabaab and AMISOM, especially in intensified fighting since the bombings in Uganda last year.

Since then, Ugandan President Yoweri Museveni has been drumming up support for an increase in troop strength. Along with other leaders in the regional Inter-Governmental Authority on Development in Kampala, he proposed AMISOM’s mandate be shifted from peacekeeping to more aggressive peace enforcement – this was rejected by the United Nations Security Council.

Hogendoorn doubts that a military offensive can succeed without a matching political strategy. The ICG report warns that the TFG’s failure to make alliances with other groups is a dangerous sign. The transitional government gets along with neither local authorities in places that are successfully running peaceful areas in the north and centre of the country like Xeeb or Puntland, nor with clans in the south and centre that could be natural allies.

The status quo is untenable, says Hogendoorn. “I should mention that Al-Shabaab is not stupid. They realise they have time on their hands. They have tried to increase the price of [maintaining] UPDF and Burundian forces through inflicting as many casualties as possible, and of course with the Kampala bombings. They would like to force AMISOM to withdraw.”

The war in Somalia barely featured in Uganda’s recent presidential elections. While the opposition called for a withdrawal after the bombings last year, they and most of the public have since fallen in line with the government’s argument that abandoning the mission could further destabilise Somalia and pose a terror threat to Uganda. The government usually frames the troop deployment as necessary because the AU and the U.N. want them there.

But it’s people like Muhamuza and his grieving family who are paying the full price for an incomplete strategy. He only joined the army a year and a half ago, spending a year in training before his posting to Mogadishu.

“I had objected to him joining the army,” his brother told IPS. “In fact he left home stealthily and joined. When he came to tell me he was to be deployed in Somalia, we had fears.”

More operations like the February offensive could sharply increase the casualties, and turn a spotlight on how the mission is being handled and undermine support in countries contributing troops.

For now, Private Michael Muhamuza’s family faces holding a funeral without a body. The AU mission fights on towards a hazy objective. Somalia continues without a government worthy of the name.