MOSCOW, May 12 2011 (IPS) - In the wake of anti-government protests by the opposition and youth activists in Baku, Azerbaijan, authorities have arrested and detained scores of demonstrators and journalists in deplorable and inhumane conditions. 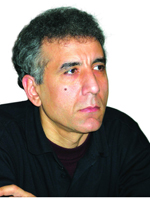 The European Parliament denounced the “worsening human rights situation in the country” Thursday, and called for the release of young activists who used Facebook.com to call for anti-government protests.

Intigam Aliyev, a human rights lawyer and president of the Legal Education Society (LES) in Azerbaijan, has been offering detainees legal services. Aliyev spoke with IPS about the risks and challenges faced by activists in Azerbaijan. Excerpts of the interview follow.

Q: There are reports that some activists were detained after the last parliamentary elections, and also during protests in March and April. What are your views on this? A: Azerbaijani authorities detained at least 40 opposition activists at the Apr. 2 opposition rally in Baku. The arrests were the government’s latest attempt to prevent large-scale protests – similar to those that occurred in North Africa and the Middle East – from spreading to Azerbaijan.

Local authorities are determined to prevent any efforts of opposition to exercise freedom of assembly.

Azerbaijan must follow all its international commitments. Azerbaijan is a member of the Council of Europe and a party to the European Convention on Human Rights (ECHR) as well as a number of other international human rights treaties, including the International Covenant on Civil and Political Rights.

The crackdown to prevent peaceful protest was a blatant violation of Azerbaijan’s obligations under international law and as a member of the Council of Europe.

Authorities are using the smallest pretexts to silence critics, thus damaging the reputation of Azerbaijan’s justice system. These arrests should stop immediately.

Q: How are political detainees’ cases progressing in court? A: Since the start of this year, all peaceful demonstrations in Baku were systematically dispersed and a large number of participants were arrested and immediately sentenced to administrative detention without proper legal defence.

Many of the detainees, including journalists, were prevented from reporting and filming the demonstrations. Surprisingly, some have been charged with criminal offences for conducting peaceful demonstrations.

Most of the activists were quickly convicted on administrative charges for disobeying police orders… Activists were beaten, tortured and threatened by police while in custody.

The Azerbaijani authorities have initiated criminal proceedings, in absentia, against France-based activist Elnur Majidli; in addition to Hasan Karimov, chairman of the Popular Front Party of Azerbaijan (PFP); Tazakhan Miralamli, chairman of Jalilabad branch of the PFP; and Tural Abbasli, head of the youth organisation of the opposition Musavat Party, who helped to develop the Facebook.com page calling for all the March and April political protests.

Unfortunately, we are unable to provide all the detained activists with required legal aid and services. Azerbaijan Bar Association (ABA) is under control of the government.

Lack of independent lawyers and tight finances of the detained people make their provision with qualitative legal aid almost impossible. In many cases, the court appoints lawyers financed by the government so their participation in the legal process is a formality, or they just act according to the direction of prosecuting bodies or the court.

The prison cells are overcrowded with stale air, saturated with carbon dioxide and fumes, especially in hot weather… These conditions cause frequent respiratory illnesses, shortness of breath, drowsiness, dizziness, apathy and emotional instability. Many of the detainees are constantly coughing, wheezing when breathing – every minute they take a sip of water, so as not to suffocate. All abovementioned facts give us grounds to consider these conditions of life in prison inhumane and close to ill treatment and torture.

For example, Hasan Karimov, chairman of the Supreme Mejlis of the Popular Front Party of Azerbaijan (PFPA), suffered a heart attack while in detention at the Sabayil District Police Department in Baku after participating in an opposition rally.

Prisoners also face psychological oppression. Lawyers, friends or relatives are prevented from visiting the detainees. Prisoners are deprived from any access to the information. It is prohibited to bring into the prison any books or newspapers.

Unfortunately, the prisons are closed to the NGO representatives. All requests for access to the prisons were rejected without any legal basis.

Q: What do you suggest should be done in order to stop further political suppression and frequent arrest of young political activists in the country? A: The repressive politics pursued by the government since the collapse of the Soviet era, most often against democratic institutions now leading to the one-party system where all the powers are concentrated in one authority, has to be changed.

Long-term repression and strong-handed power of the Azerbaijani president has to give way for popular modern democracy.

Soon after the meltdown of the Soviet system, we enjoyed stable support of international organisations, but that has dwindled or dried up during the past few years, thus making it harder to promote democracy.

International organisations like the Organisation for Security and Cooperation in Europe, the U.N., and the Council of Europe must be more persistent in their collective demands for the fulfilment of the Azerbaijani government’s obligations… particularly those calling for the release of all political prisoners and the establishment of an environment in which journalists, human rights activists and all opposition groups can conduct their activists free from interference and inhumane intimidation by the authorities.