MANSA, Zambia, May 27 2011 (IPS) - Mirriam Kauseni is on a quest to become her town’s first ever female parliamentarian. She has yet to be elected to run for the post by her party, the Patriotic Front (PF), but Kauseni has already been conducting door-to-door campaigns, telling people to vote for her in the country’s national elections. 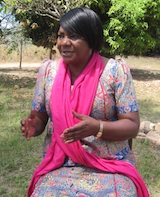 Mirriam Kauseni has been conducting door-to-door campaigns, telling people to vote for her in the country's national elections. Credit: Nebert Mulenga/IPS

The resident of Mansa in the northern province of Luapula, attends all her party’s fundraising ventures in the constituency, attends all community gatherings such as funerals; church functions; and weddings. Here she always takes a moment to tell people the importance of voting for her in this year’s ballot, the date of which is yet to be announced.

“I have never stopped going into the field from 2006 to-date. I have been to remote villages in Mansa Central. My name is a household name,” she says.

The PF is yet to announce its candidates for the forthcoming general election, but Kauseni has continued to campaign. When asked why she was campaigning before the party made its final decision on her candidature, she tells IPS: “I don’t know the chances but if they follow popularity of a candidate, then I think I stand a very good chance. I am working very hard, I am campaigning, I am on the ground to ensure the party adopts me, to ensure I win the election after I am adopted.”

This is Kauseni’s second attempt to run for parliament. She first put herself forward as a parliamentary candidate in Zambia’s 2006 general election. She was then a member of the ruling Movement for Multi- party Democracy (MMD).

But she says she was not elected to run by the MMD because she had no money to fund the campaigns. She adds that she also believes she was not elected because she was a woman. She has since defected to the PF, the country’s main opposition, which enjoys massive support in northern Zambia. The PF is not funding her campaigns either, but her husband now financially supports her campaigning. Kauseni does not say why her husband did not support her campaigning when she was with the MMD but says his support has enabled her to reach the outmost parts of the constituency. But, Kauseni says, she cannot always rely on her husband’s support. “But sometimes even my husband tells me … ‘I have given you enough money so, this time look for some money on your own.’ He gets tired and it’s normal, because I am always asking for money. So that’s my biggest challenge. Besides that, I don’t get anything elsewhere. The political party also doesn’t give me anything, not yet,”

Kauseni’s main campaign issues hinge on opening up agricultural-based factories and markets for farming produce, as well as improving the road network in the rural parts of the constituency.

Kauseni is not alone in her quest. The Zambia National Women’s Lobby Group (ZNWLG), a gender-based non-governmental organisation promoting the participation of more women in governance, is fully behind her.

Since early 2011, the ZNWLG has been empowering prospective women politicians with skills in public speaking, self-confidence, self-esteem, and usage of persuasive language when articulating issues, among others. Women ‘politicians’ are also learning about public office etiquette, the functioning of the arms of government, and leadership in general.

Kauseni is one of 198 women trained under the programme so far. “The (ZNWLG) training was about encouraging us not to give in to men, not to accept any type of intimidation, to be confident, to be visionary and to be courageous. There’s going to be a bit of change like in the approach. They taught us how to best approach the people,” Kauseni tells IPS.

The women being trained were floated by their political parties as prospective candidates for parliamentary and local government seats, says Beauty Phiri, chair of the ZNWLG.

Zambia has one of the worst records in the region in terms of women participation in politics. Out of the current 150 MPs, only 22 are women; with a further 91 women occupying local government seats out of the over 3,000 councillors countrywide.

The ZNWLG is concerned and says the record is embarrassing for Southern Africa’s oldest democracy.

“Our biggest worry is that men are still the final decision makers in this. A woman would have laid the ground, done everything in that constituency, but when it comes to adoption, it is the men who have to make the final decision,” Phiri comments.

“They will tell her, ‘yes you have done everything but we feel financially you cannot manage, so you are going to be the campaign manager for this gentleman who has a financial muscle’.”

But the response to the ZNWLG training programme is providing a window of hope for better things to come. Phiri explains: “The response is overwhelming. In southern province, for example, we had a programme to train about 35 women but 45 turned up and instead of sending them away, we had to train them all.”

Meanwhile, Kauseni believes in herself and has just relinquished her position as PF vice-treasurer for Mansa District, which she has held since 2008, to concentrate fully on her campaign as a prospective parliamentary candidate for Mansa Central Constituency.