PAKISTAN: After the Flood, Green Homes

KARACHI, Jul 27 2011 (IPS) - Subhan Khatoon’s brand new home is nothing like the one that got washed away, along with all her worldly goods, in the 2010 monsoon floods that submerged a fifth of Pakistan and left 2,000 people dead. 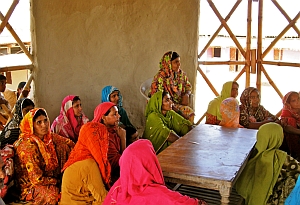 Before that deluge, Khatoon, 45, could not have dreamed of owning a well-ventilated house with such luxuries as an attached toilet and a clean kitchen.

Khatun was lucky that the district administration of Khairpur identified her village Darya Khan Sheikh, on the banks of the Indus in Sindh province, as one of the worst affected, and her house as one that had been completely destroyed and, therefore, merited replacement.

The vision behind the HF initiative is the use of local materials and a workforce backed by students from schools of architecture and engineering.

Established in 1984 by Yasmeen Lari – incidentally Pakistan’s first woman architect – the HF basically documents historic buildings and works for their conservation, but came forward to help with post-disaster reconstruction.

“These young professionals must learn to respect the traditional ways of building and also get hands-on training both technical and humanitarian in nature,” Lari told IPS.

They have already handed over 104 homes in two villages in Sindh, all built with bamboo, lime (as opposed to cement) and mud. Not only can these be made speedily, they are cost-effective at Pakistani Rs 55,000 (647 US dollars) and have a low carbon footprint.

“We showed everyone in the housing business that you can make a home without wood, cement or steel,” says Lari, adding that the production of steel and cement is highly consumptive of energy.

Khatoon, who cannot shake off memories of being rescued in a boat along with 500 other people, worries that that her new house too may end up getting swept away by the next major flood.

Her fears are not unfounded. Climate change experts predict an increase in the frequency of floods as even minor changes in temperatures can have huge impacts on the environment and food security, as the 2010 floods demonstrated.

But Naeem Shah, head of the project, assures Khatoon that her new house will last a good 20 years. “Even if the waters flood the area, the walls of your home will remain intact, only the plaster will come off, but you can always apply a new coat.”

Shah gains his confidence from having worked in making structurally sound and eco-friendly housing since the massive earthquake of 2005 that rocked northern Pakistan.

“The homes that we built in Swat using the same materials have withstood three feet of snow and excessive rains, so there is every likelihood that these can resist the weather in Sindh.”

Bamboo, the basic material used for the homes, is “fast growing, extremely strong and environmentally sustainable,” says Shah. Local stone is used for foundations and cross bracing infill and different mixes of mud and lime for mortar and plaster.

“We were pleasantly surprised by the insulation provided by mud and lime,” says Lari, adding that by using indigenous material “the locals develop an instant comfort level as they know how to use it even after you leave”.

Best of all is the ease and speed with which the new homes can be constructed. “It takes about eight days for a house to be completed by a team of four skilled people and four labourers,” says Shah

That is fast considering that for six months after the floods, the 56 families of Darya Shah Khan camped out in the open, dependent on hand-outs.

Many in the village say the deluge has come as a boon for them. The use of local material and workforce has resulted in economic regeneration.

A neighbouring village, where reed panels are made, has become the supplier of the prefabricated roof panels while such items as bathroom screens made from date palms, come from another nearby village.

“All this would not have been possible had we used concrete blocks and galvanized iron sheets to make walls and roofs,” says Shah.

Along with providing clean, structurally sound homes, HF has brought about a gradual change in the lifestyles of the villagers, nudging them towards cleaner, greener living.

This was possible because HF sought the help of architecture students who worked dedicatedly alongside the villagers.

“In the evenings, these students would pick up issues identified by the villagers and, through short skits and discussions, try to bring about awareness on such things as hand-washing,” said Shah.

“No longer will you have to watch your step for fear of stepping on animal dung as you make your way around the village,” points out Shah. The villagers have seen the wisdom of corralling their livestock in a common area instead keeping them next to their homes.

“The place was littered with not just dung. There was rotting fish all over the place. So we introduced them to the simplest and oldest known preservation method – low-cost salting and sun drying,” Shah said.

But if you ask the village women, what is the best thing that has happened to them after the floods, they all point to the women’s centre, a hexagonal structure on stilts.

“We never had a place of our own and we never got together the way we do now,” says Shahun Bibi, 30. “Here we listen to each other’s problems and try and find solutions to them.”