BLANTYRE, Malawi , Sep 20 2011 (IPS) - Soot and ash filled the air the day after a fire gutted Malawi’s Blantyre Market. Men and women merchants wore solemn expressions as they shovelled piles of debris from the site on Tuesday. 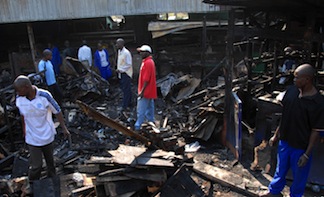 Dozens of merchants lost everything in the blaze, which some say was linked to Wednesday’s cancelled anti-government protests.

On Tuesday merchants worked carefully to clear the area, being careful to avoid the thick puddles of foul black slime. Many said that businesses they had spent years building were totally destroyed by Monday’s fire.

“My future is doomed, all of my dependants’ futures (are) doomed,” Himoni Amanu, president of the Blantyre Vendors Association, said. “May I plead with lending institutions in Malawi to lend us some money? We are capable people who will pay back in time. Let them wear a human face and come to our rescue.”

The loss of his stall and his goods has cost Amanu nearly two million kwacha (roughly 12,500 dollars).

The tragedy that befell Amanu and other vendors at Blantyre Market comes amidst a tumultuous time for Malawi. In July demonstrations against government left 20 dead.

This fire was one of three on Monday, all of which occurred just days ahead of the cancelled anti- government protests originally scheduled for Wednesday. (After weeks of build-up, on Tuesday civil society leaders called off plans to take to the streets, citing security concerns, and instead asked all Malawians to remain at home for three days.)

Also on Monday, a second blaze destroyed seven stalls at Lilongwe’s Tsoka Market before it was brought under control. And at a separate location in Lilongwe, a third fire destroyed the home of Salim Bagus, the national organising secretary for the People’s Party (a member of the political opposition).

Blantyre Market was rife with theories on who was responsible for the fires. “We feel it is politically motivated,” one merchant said. Others could not help but speculate that the fires were directly tied to Wednesday’s planned protests.

Rafik Hajat, a prominent human rights activist and staunch critic of the government, characterised the development as “simply part of our ongoing saga.”

Hajat was alluding to the fact that the fires came barely a month after petrol bombings on his office and the home of Reverend MacDonald Sembereka, another prominent opponent of President Bingu wa Mutharika and the ruling Democratic Progressive Party (DPP).

Those incidents remain under investigation. However, in an interview conducted earlier this month, Hajat argued that the growing list of suspected incidents of arson constituted “attacks on anybody possessing an alternative view who dares to express it.”

On the market fires, police have stated that the cause of the blaze in Lilongwe is yet to be identified.

Meanwhile, officials in Blantyre are toting a couple of different explanations for the fire here. Speaking on local radio on Sept. 19, Information Minister Patricia Kaliata claimed that the DPP government suspected enemies of the state started the fires in an attempt to derail Malawi’s progress.

However, police spokesperson Davie Chingwalu announced that a 12-year-old boy was in custody and had admitted that he and four friends had accidentally started the blaze.

Representatives for the president’s office and the Ministry of Information could not be reached for comment. However, Wakuda Kamanga, secretary general for the DPP, said that he was sceptical of a connection between the fires and Wednesday’s planned protests.

“Fires like this have happened before when there were no demonstrations around them,” he explained. “So connecting them to the demonstrations is something I would be slow to comment on. I would wait to see how investigations go.”

Some have suggested that the fires are part of a conspiracy orchestrated by Mutharika’s DPP. Ahead of possible unrest expected for Wednesday’s protests, they claimed government was using the fires as a pretext with which to bring Malawi’s commercial sector in line with government. Many believe that because of the loss of their goods, the merchants would look to government for assistance and could not possibly protest against government as a result. (Government has already pledged assistance to the merchants affected by the fires.)

Some say that the fires were an excuse to beef up state security while simultaneously pacifying an important segment of the population.

Back among the remains of Blantyre Market, Aminu said that it would be difficult to believe that two market fires, which occurred on the same night in two different cities, would not have some connection between them. “What type of accident is this?” he asked. “This should be a deliberate act perpetrated by some evil people for their own interests.”

But the men and women who lost their livelihoods are angry and want somebody to be held responsible for what has happened. It has been a difficult year for Malawi’s economy, and many Malawians have been left struggling to feed their families. Fuel is often scarce, and power blackouts and water shortages are all but a fact of daily life.

In Blantyre Market on Tuesday, Raphael Nameta, the owner of an electronics stall, held back tears as he recounted his ruined business.

“I have lost fridges, cookers, plasma screens, laptops, video and digital cameras, and cell phones,” complained Nameta as he cleared piles of ash from where his shop previously stood. “It pains me very much.”

The sole earner for an extended family of 12, Nameta said it was now uncertain how his family would go on.