Polio Spreading Out From Pakistan 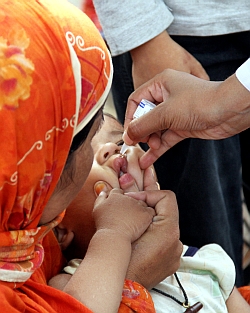 Oral polio vaccine drives in Pakistan have failed to stop a resurgence of the virus. Credit: Fahim Siddiqi/IPS

Over the last two months, seven cases have been confirmed in China’s western Xinjiang province where a vaccination drive is under way. It is the first outbreak since 1999, when it was traced to India. China’s last indigenous case was in 1994.

“It is a sad piece of news, but not altogether unexpected,” said Dr. Nima Abid, polio team leader for the World Health Organisation (WHO) in Pakistan, talking to IPS.

The strain of polio isolated in China is genetically linked to the wild poliovirus type 1 (WPV1) currently circulating in Pakistan, according to a Global Alert and Response (GAR) warning from the WHO released on Sep. 20.

WHO says this confirms that the poliovirus is spreading internationally from Pakistan, and blames inadequate immunisation in the country for the spread.

“In 2011, supplementary immunisation activities in Pakistan have been inadequate in quality in key high- risk areas,” states the GAR.

WHO’s concern is shared by the United Nations Children’s Fund (UNICEF). “Clearly there was enough travel between the two countries for the virus to have been exported,” said Dennis King, head of UNICEF’s polio unit in Islamabad.

“It is a very serious concern,” King said. “The floods last year and the security conditions have presented real challenges to immunisation activities for eradication.”

According to King, despite the immunisation programmes the virus has continued to circulate in parts of Balochistan, the Federally Administered Tribal Areas, Khyber Pakhtunkhwa, northern Sindh and Karachi.

Since 1988, the Global Polio Eradication Initiative – spearheaded by WHO, Rotary International, the U.S. Centres for Disease Control and Prevention and UNICEF – has achieved a 99 percent reduction in polio incidence worldwide.

This spectacular achievement has been possible through the mass administration of OPV simultaneously to all children below the age of five, to induce ‘herd immunity’ in entire regions and replace the wild polio virus with a cultured, attenuated strain.

Pakistan now leads four countries including Afghanistan, Nigeria and India where polio remains endemic. But Pakistan is the only country that has seen a resurgence.

The last 10 years saw Pakistan taking massive strides to reduce the polio incidence. In 2005, the number of cases went down to just 28, but since then there were signs of the OPV drive losing momentum.

King said there is now pressure on the Pakistan government to improve the quality of immunisation drives.

While partners and donors acknowledge factors like natural catastrophes and insurgency, King is “not sure how patient they will be if they don’t see big drop in polio cases by the end of this year or early next year.”

Referring to the outbreak in China, he said polio will spread as long as there is “uncontrolled polio transmission in any country.”

There is now better coordination between Afghanistan and Pakistan authorities, especially after it was found that the strain of the virus circulating in both countries was the same.

“Transit teams at every border post ensure that children are vaccinated irrespective of which side they are coming in and we’re impressed with that,” King told IPS.

An outbreak of polio in 2010 in areas of Tajikistan along Afghanistan’s northern borders, which left 500 children paralysed, shows the rapidity with which the virus spreads.

India has, since September, made it mandatory for all children up to five years of age crossing the border overland by bus or train to be given polio drops.

For five years now, Saudi Arabia has been following a policy of requiring people coming into that country from Pakistan and other polio-endemic countries to carry certificates of vaccination, and also have OPV drops on arrival.

For now, more than the export of the virus to neighbouring countries, health experts are concerned with increased transmission within Pakistan.

“The government needs to get to the root of the problem,” Dr. Mubina Agboatwala, former head of the polio clinic at Karachi’s government hospital, told IPS.

“Is it campaign fatigue? Why has the enthusiasm sapped? Are the vaccinators doing their job? Why are certain pockets persistently unreached?”

Agboatwala says it is now clear that the key to controlling polio in Pakistan lies in micro-planning to ensure that every child is vaccinated.

There is emphasis on micro-planning for vaccination campaigns at the operational as well as the communication level, under the National Emergency Action Plan for Polio Eradication launched in January by President Asif Ali Zardari.

“We are leaving no stones unturned to reach and vaccinate every child under five years of age in every vaccination round,” said King.

“We have to reach every doorway and convince every parent that OPV is safe and necessary to prevent polio. By having their children vaccinated every time teams come to their door, Pakistani parents can protect their children,” King said.

“Further, by cooperating, Pakistani parents can gift a polio-free world to countless unborn generations of the world’s children,” King added.