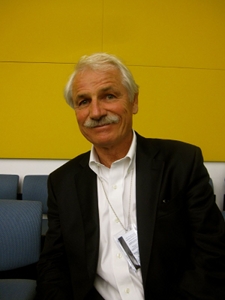 Known for his series of awe-inspiring aerial photographs in the book “Earth from Above”, published with the support of the United Nations Educational, Scientific and Cultural Organisation (UNESCO), Arthus-Bertrand also produced “Forest”, a film launched in 2011 for the International Year of Forests, and spoke on desertification during the last United Nations General Assembly.

In 2005, he established the GoodPlanet Foundation and turned his actions to focus on the general public. Goodplanet distributes posters on specific environmental topics to French schools and has also put on many related exhibitions.

“My work as a photographer and filmmaker… is to influence public opinion with imagery,” Yann Arthus- Bertrand told IPS.

IPS correspondent Tressia Boukhors spoke with him about the role of public opinion in determining the future of environmental and energy policies.

Q: Your book “Earth from Above” has sold over three million copies and been translated into 24 languages. What led you to become involved in environmental protection on this large scale?

A: When I was born, the world was two billion people. On October 31, we will become seven billion. This really highlights man’s impact on earth and the need for sustainable development.

I do not feel guilty about the way I live, but responsible. It really is a matter of responsibility rather than guilt, and the project Earth from Above gave me the tools to act.

Q: What made the greatest impression on you while working on this project?

A: The work of NGOs and the involvement of civil society made a deep impression on me. NGOs have an essential place in the field, as does their work in education and health, especially in Africa.

Taking action makes me happy, especially in a time of mass denial. We do not think about the end of oil, climate change and economic crises. We still act in the same way without seeing that other lifestyles are possible.

The aim of the project 6 Billion Others was to help different people understand each other. It focuses on people directly targeted by the Millennium Development Goals set for 2015, such as eradicating extreme poverty and hunger, (ensuring universal access to) education, gender equality, fighting epidemics and ensuring environmental sustainability.

Q: What does protecting the environment mean to you?

A: Environmental protection affects everything, and the primary reason we care about it has to do with human welfare, followed by concerns for biodiversity. It is all about reducing poverty and reaching the MDGs. We realise that responsible development is possible, even in developing countries.

To change people’s behaviour and make them more responsible about the environment, we should convince them through their own will to change and not through their fear of negative consequences. For me, photography or movies are a way to touch people. They are mass media that are easy to understand and powerful enough to effect change.

Q: Why have efforts to protect the environment and meetings such as the Copenhagen Summit failed to affect policy? How can we avoid this problem in the future?

A: We have the politicians we deserve. They reflect public opinion and show that there is still no active environmental protection but instead, permanent denial and nonstop growth.

The late economist Kenneth Boulding said, ‘”The only people that push for unlimited growth are madmen and economists.” I would also add ‘politicians’. We still don’t understand that we are destroying the environment but it is too late to be pessimistic; we should act now.

We need to learn that consuming less is actually more. Despite that, there is still no will to change. The issue will be to sensitise public opinion because there are still people who do not believe climate change is a reality. I am personally convinced that movement against climate change can be the biggest movement ever but that could only happen by convincing the public of its responsibility, not of its guilt. Everyone can play a part.

Q: Do you see any new approaches to renewable energy, including nuclear power, since the Fukushima disaster?

A: Nuclear energy has become an obsession and people are unable to imagine life without it. Of course, there is a need for nuclear power today, with all the energy we consume – it represents almost 85 million barrels of oil a day.

Nevertheless, we must stop thinking that nuclear disaster is impossible. It is a reality and we can expect more and much more destructive nuclear disasters than Fukumisha’s. That is why it is time to focus on alternative renewable energies.