SRINAGAR, Oct 26 2011 (IPS) - “If one were to search for a positive outcome to the ongoing armed conflict in Jammu and Kashmir state, it would be the growth of journalism,” says Prof. Shams Imran at the department of journalism, Central University of Kashmir. 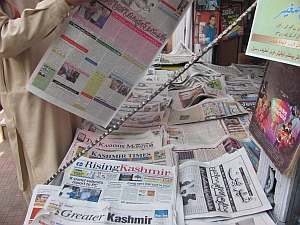 When the simmering secessionist conflict turned violent in 1988-89, there were just a handful of newspapers in Kashmir against the 87 newspapers and news magazines in English and Urdu languages currently being published in the state.

The popularity of journalism as a career is reflected in the fact that all three universities in Kashmir offer post-graduate courses in journalism and mass communication, with at least 20 students passing out from each of these universities every year.

Most journalism graduates are absorbed by Kashmir’s growing media industry, while some venture out of the state to find jobs with the large media houses of Delhi and other cities of India, a country which boasts a large and free press.

But, all is not as well as may seem to the casual observer. Late September, a planned Harud (autumn) literary festival had to be cancelled because of opposition from literary figures and rights activists who held that such an event was inappropriate in a place where fundamental rights were being denied.

“A literary festival, by definition, is an event that celebrates the free flow of ideas and opinions. It not only assumes a freedom from fear. It demands a certain independence of mind and spirit. To hold it in a context where some basic fundamental rights are markedly absent, indeed, denied to the population, is to commit a travesty,” read the open letter signed by some 200 writers and activists.

The opposition to the festival came a year after several Kashmir-based newspapers had to suspend publication for more than 10 days because of curfews imposed across the Kashmir valley to control stone- pelting and arson by youth protesting against excesses by security forces.

It was also a reaction to the detention and beating up by security forces on Aug. 19 of freelance photojournalist Showkat Shafi while he was carrying out his professional duties.

Shafi’s beating up was seen as a sign of the uneasy relationship that authorities in the state have with the media and the extension of a policy that has seen many newspapers starved of revenue by denial of government advertisements.

The managements of leading newspapers of Kashmir – Kashmir Times, Greater Kashmir and Rising Kashmir – say that they have had to do without advertisements for the last seven months with no explanation given.

“We have been incurring huge losses ever since government imposed this ban,” Prabodh Jamwal, editor of the Kashmir Times group of publications, which publishes three newspapers including the widely circulated English-language daily, ‘Kashmir Times’, told IPS.

“Even when we made representations to the ministry of home affairs and the directorate of audio-visual publicity, they failed to explain why the advertisements were stopped,” said Jamwal.

Rashid Makhdoomi, printer and publisher of Greater Kashmir Communications, which publishes the English-language daily ‘Greater Kashmir’ and the Urdu daily ‘Kashmir-e-Uzma’, said that the policy meant a loss of about Indian rupees 800,000 (18,000 dollars) to his organisation per month.

“We approached the central information and broadcasting ministry and the home ministry many times, but never got any positive response,” he told IPS.

For the Kashmir Media Group (KMG), a two-year-old media house, the ban has been devastating. “We are surprised at the government stopping advertisements as we have been doing our work professionally, giving space to different viewpoints,” said Hafiz Ayaz Gani, managing editor of KMG which publishes ‘Rising Kashmir’, an English-language daily.

“This is a violation of the basic right to own a newspaper and sustain it through advertisements meant to provide information of the people,” he said. “We believe there is no justification for this in the world’s largest democracy.”

Journalists who do not toe the official line complain of indirect pressure brought to bear on members of their family. Among these is Muzamil Jaleel, a senior writer for the national daily ‘Indian Express’.

“Reprisals have begun. Be men. It’s me who writes and not my family,” Jaleel wrote on his facebook page to voice concern about the harassment of members of his family by police after he filed a story on custodial deaths in the Indian Express on Aug. 14.

Despite such friction Kashmir’s media has been vibrant enough to throw up a handful of powerful writers who have created a mark not only with reportage but also with books based on the conflict. Examples include Basharat Peer, author of ‘Curfewed Night’ and Waheed Mirza with ‘The Collaborator’.

“These achievements were possible because the writers grew up along with the media in Kashmir,” said Imran.