WASHINGTON, Oct 4 2011 (IPS) - As a light drizzle fell Saturday, U.S. Energy Secretary Steven Chu pointed to solar houses constructed by students on the National Mall park in Washington as evidence that the U.S can compete internationally in the renewable energy market to create jobs and win “the war against climate change”. 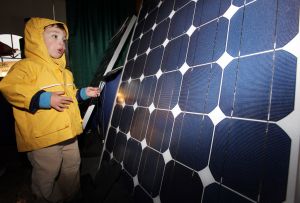 The energy-efficient homes were designed and constructed during the Solar Decathlon, a biennial collegiate competition sponsored by the Department of Energy (DOE) that challenges students to design and build solar-powered homes that are affordable, energy-efficient, and architecturally well-designed and then present them to the public.

The homes were on display for about one week from the end of September through Sunday, Oct. 3.

Four thousand students working on 20 teams from around the world designed the homes, and the DOE, which has sponsored the event since 2002, estimated that by Saturday more than 200,000 people had visited them.

On Saturday, gray light filtered into the kitchen through a “living wall” of plants and herbs on shelving as crowds shuffled through a house designed and constructed by a team from Middlebury College in Vermont.

The home, inspired by New England farmhouses, featured south-facing windows, skylights, front-loading washer and dryer, Vermont White Oak decking, and student-designed furniture. In the hours before the much-anticipated award ceremony, Middlebury students were busy guiding visitors through the home they had worked on for two years.

Alison Thompson, an environmental studies major with a focus on geology, said she was proud the team from her small liberal arts school – without any engineering team members – had made it to the competition.

“This embodies the spirit of what we are trying to do (at Middlebury)”, Thompson told IPS. “The fact that we showed up here and we are a serious contender, we are thrilled,” she said.

The team, a diverse mix of students including English and political science majors, met once per week in their spare time over a period of two years to fundraise, design, and plan the house after a student’s mother suggested entering the competition.

Later at the awards ceremony, the Middlebury College team erupted in raucous shouts of joy when organisers announced Middlebury had won first place in the market appeal contest. The University of Maryland house took first place overall, while Purdue and Victoria University of Wellington, New Zealand came in second and third, respectively.

Appalachian State University, located in the mountains of North Carolina, won the “people’s choice award”, gaining the most visitor votes for its “solar homestead“, a structure with a long, covered porch and a design inspired by the dwellings of rugged Appalachia.

At the Solar Decathlon awards ceremony, Chu said critics of the U.S. solar power and green energy initiatives need only to look at student-built model homes to see that U.S. innovation “is alive and well”.

“Just as there is a fierce competition here (at the Solar Decathlon), there is competition across the world,” Chu said. He said that by 2050, solar power could generate 20 percent of the world’s energy and that countries like China were investing heavily in the sector.

In September, the crash of Solyndra, a California-based solar cell manufacturer with 535 million dollars in federal loan guarantees, provoked widespread speculation about the future of green tech initiatives in the U.S. Critics pointed to the crash to argue that the U.S. renewable energy sector has had its day in the sun and does not merit government support.

Since the crash, reports such as this analysis from the Washington Post have highlighted how a variety of circumstances contributed to the company’s failure. And while critics argue the U.S. can’t compete with China, according to a report from ThinkProgress, the U.S actually exported more than 1.7 billion dollars worth of solar products to China in 2010 and had a net trade surplus of 247 million dollars.

Alexander Ochs, director of the energy and climate programme at the WorldWatch Institute, said the solar industry was actually one of the fastest-growing industries in the U.S., with 5,000 companies employing more than 100,000 people. He said Solyndra failed because it made poor investment decisions and was buffeted by price fluctuations in the raw materials market – not because solar power industry is in trouble.

“Solyndra is now used as a scandal to set an example that solar is not working in the U.S. or that it cannot compete on the international market. It is basically used as an attempt to kill the industry as a whole,” Ochs told IPS.

In fact, Ochs said the solar industry grew at a rate of 69 percent in the last year alone, more than doubling in size, and at a rate much higher than the fossil fuel industry, which grows only in the low single digits, or nuclear, the only energy sector with a negative growth rate.

Notwithstanding those facts, Ochs said criticisms of government support for renewable energy did not take into account the comparatively large cost of fossil fuel subsidies.

A study by the Environmental Law Institute estimates that between 2002 and 2008 in the U.S., the fossil fuel energy-producing sector received 72.5 billion dollars in subsidies while, in the same six- year period, renewable energy received 29 billion, a large proportion of that going to biofuels.

Arguing that the fossil fuel industry receives subsidies that are direct, indirect, infrastructural – even subsidies in the form of externalised health and environmental costs – Ochs questioned how critics could argue that the renewable energy industry could compete without getting subsidies itself.

Ochs told IPS, “Twenty years after we started taking climate change seriously and in light of all the economic problems and health problems that result from our use of fossil fuels, we are still putting 12 times the amount of money into fossil fuels.”