AFGHANISTAN: Fears of Being Left in the Cold after Troop Pullout 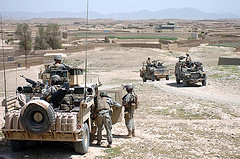 BERLIN, Nov 28 2011 (IPS) - With the majority of international troops expected to withdraw over the next three years, there are growing doubts over donors’ commitments to continue to support Afghanistan, one of the poorest countries in the world. German politicians and experts say the fears are legitimate, and that Afghanistan should take full advantage of the Dec. 5 international Foreign Ministers Conference on Afghanistan to secure a strong commitment from donor countries.

“You should make sure that in Bonn the cheques will be signed,” Frithjof Schmidt, a member of the German parliament for Alliance 90/The Greens, recommended to Afghan politicians and members of civil society at a Nov. 23 international forum in Berlin organised by the green think tank and international policy network Heinrich Böll Foundation.

Schmidt urged western donors to commit to continued civilian aid after the pullout of international troops, set to be complete by the end of 2014. Afghanistan should not undergo what other conflict regions have painfully experienced: the decline of development aid after the withdrawal of foreign troops, he said.

“We must guarantee a responsible handover of responsibility for security,” said Ambassador Michael Steiner, Germany’s Special Representative for Afghanistan and Pakistan. “We should not leave ruins of engagement.”

Steiner and Schmidt acknowledged the general perception that there will be no military solution to the Afghan civil war and that focussing on military aid has proved to be a mistake. “The last decade of international presence in Afghanistan has been a history of fatal misjudgements and missed chances,” Schmidt said.

For years Afghan and international NGOs have warned that the military rationale has increased the insecurity in the country and undermined the positive gains of the previous ten years in the fields of education, health and infrastructure.

From the very beginning the western allies committed serious mistakes, said Francesc Vendrell, former UN/EU Special Representative to Afghanistan. “In the difficult Afghan setting it’s important to take advantage of the few materialising opportunities,” he told IPS. “This has not happened.”

Two “cardinal mistakes” he mentioned were the decision by western countries to include Afghan warlords in the government and the sidelining of the United Nations. In his point of view the reduced U.N. participation in the peace process has created more space for combat-ready actors like NATO and the United States, whose pretext for invading Afghanistan was to fight the Taliban for harbouring Al Qaeda.

Because of their neutrality, the U.N. would be the best facilitators of talks with the Taliban and others in Afghanistan, who are essential for peace, Vendrell said.

The Bonn conference is being held much too early, Vendrell criticised. Without clear positions on the part of the actors involved, the conference will be a “waste of money,” he said.

The Dec. 5 conference, presided by Afghanistan and hosted by Germany, will be attended by delegations from more than 90 countries.

Since the withdrawal plans were announced in 2010, Afghans have feared that they will be left in the lurch, Aziz Rafiee, director of the Afghanistan Civil Society Forum- organisation (ACSFo), told IPS. He complained that NATO and the ISAF (International Security Assistance Force) will leave his country without having achieved the preconditions for the pullout.

For years, Afghan and international NGOs have called for a correction of the huge disparity between military and civilian aid. “Now that the international community doesn’t see any chance of a military victory, it’s hastily withdrawing its troops,” he said.

“The government of Hamid Karzai insists that it has received 29 billion dollars. The West (the U.S. and EU) speaks of 79 billion dollars being transferred through Kabul. Even if we assume 100 billion dollars, that’s just one-tenth of the military aid,” noted Rafiee. “With one trillion dollars in development aid we could have been much more fair.”

That seems fatally true especially in the case of the Afghan security forces, which will take on the task of protecting the Afghan people in 2014 but are much too weak to fight the armed opposition groups. Taliban fighters regularly demonstrate their strength by killing international troops. And they already control more than half of the country.

The ACSFo director pointed to a study by the German Technical Cooperation agency (GTZ – now GIZ) which reports that an ISAF soldier on duty in Afghanistan costs 4,200 dollars a day, while the monthly pay for an Afghan soldier amounts to merely 400 dollars a month. “Extensive training of Afghan forces would have translated into lower military costs for western countries,” Rafiee said.

The German Institute of Economic Research (DIW) in Berlin puts the economic costs of Germany’s ten-year participation in the Afghan war at 17 billion euros – three times what the government was officially supposed to pay. And the DIW estimates that by late 2014, the total cost of participation will jump to at least 22 billion euros.

The vast majority of Germans – between 70 and 80 percent, according to opinion polls – disapprove of the military participation in Afghanistan, where 50 German soldiers have been killed so far.

“After the fantasies of almightiness have failed” – western politicians and military leaders were sure that the fight against Al Qaeda would last no more than two or three years – “time for modesty in target-setting has come,” the diplomat Steiner said at the Berlin forum on Nov. 23. He also recommended being more confident in Afghanistan’s abilities.

Fazel Rabi Haqbeen of the Asia Foundation told IPS that “western donor countries tend to pursue a top-down approach, ignoring the abilities of local and religious institutions, especially in the countryside. There are local structures that do work,” he said. “They should not be disqualified.”

The Agency Coordinating Body for Afghan Relief (ACBAR) underlines that the sustainability of development services also depends on the capability to help to ensure that development projects benefit from local knowledge. “The violation of culture is a mistake,” ACBAR Director Anne Garella told IPS. “Quick decisions have proved to be unsustainable. On the local level it’s necessary to be patient and ‘drink a lot of tea’.”