CUZCO, Peru, Nov 15 2011 (IPS) - “This year the freeze killed my crops, our small livestock died, and now I can’t even sleep because I’m worried sick thinking about how to put food on my family’s table, since I’m a widow,” said Rosaura Huatay, an indigenous farmer in Peru’s northern Andes highlands. 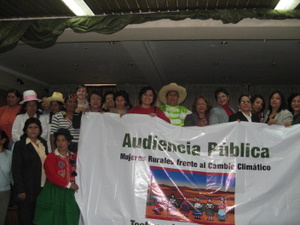 Huatay and four other campesinas or peasant women from different regions of Peru gave their personal accounts at the Rural Women Against Climate Change Public Hearing, held Thursday Nov. 10 in this city 1,105 km southwest of Lima.

The forum, organised by the Centro Flora Tristán women’s rights group, formed part of the Gender and Climate Justice Tribunals organised by the Feminist Task Force and Global Action Against Poverty (GCAP) since October in 15 developing countries.

The aim of the tribunals is to gather and compile the testimony and suggestions of women in the developing South and channel them to the 17th Conference of the Parties (COP17) to the United Nations Framework Convention on Climate Change (UNFCCC) to be held Nov. 28-Dec. 10 in Durban, South Africa.

Some 200 people, including local authorities, farmers and representatives of civil society, were moved by the accounts of the women who spoke at the hearing held in an auditorium of the state government of the south-central Andean province of Cuzco.

The five indigenous or mixed-race women talked about the impact of climate change on their lives, economic situation, family relations, and physical and mental health.

They exemplify the reality of poverty and neglect experienced by tens of thousands of families in a country that has enjoyed years of high economic growth that has not been felt by everyone – overall, more than 30 percent of Peru’s 29 million people continue to live in poverty, and the rate is as high as 70 percent in some rural highland areas.

The rural poor receive less than one percent of the state budget, although they produce seven of every 10 tons of food consumed in the country.

“In my community, women still wear ‘polleras’ (traditional native skirts), we know nothing about shoes, we use our ‘ojotas’ (rubber sandals), we cook with firewood and we sleep on animal skins on the floor,” Atencio, a 35-year-old mother of three, told IPS.

“We have been hunting, farming and grazing our animals since we were just girls,” she said.

In her rural community, Pacha Ccaccapi, located 3,810 metres above sea level, crop freezes have gotten worse and worse over the last few decades, as a result of climate change. Temperatures drop to 33 degrees below zero, destroying crops and pasture alike, and leading to the death of livestock by hunger.

“We work hard in the countryside, and all it takes is one night of intense cold for us to see nothing but dried-up plants the next day. We feel like pachamama (mother earth) is upset because we are destroying nature; the balance has been broken, and we have to fix things,” Atencio said.

Her story was similar to that of the other campesinas, even though each one of them came from very different regions in one of the most megadiverse countries in the world.

Peru is also highly sensitive to the impacts of climate change, a global phenomenon caused by the actions of the countries of the industrialised North, it was emphasised in the hearing.

Although the abrupt climate swings affect the population at large, poor rural women are the most exposed to the risks, which have further undermined their economic, social and cultural rights.

Ibárcena was unable to harvest any of the fruit or flowers she planted this year, because they were destroyed in the freezes, and the worry and despair over the loans she owes to the bank have thrust her into a state of depression.

Huatay lost her potato, corn and bean crops due to drought, which forced her children to move to other parts of the country to find work. Meanwhile, she stayed in the village, raising her grandchildren, and she is constantly overworked and stressed out, she commented to IPS.

For Yanque, uncertainty about the future has caused her anxiety since the Lucre river flooded and swept away her house and belongings.

And Berecho has not yet got over the loss of her crops and seeds to flooding caused by frequent torrential rains.

When the women shared their pain and frustration with the auditorium, their voices would break momentarily. But when they talked about their suggestions and ideas, the strength with which they have withstood the climate injustice that has made their difficult lives even tougher shone out.

Their resilience is enormous, despite the fact that they live in times when everything seems to have turned upside down and knowledge handed down over generations can no longer be relied on because of climate change.

For example, the seasons of the year, which determine agricultural and water cycles, are no longer predictable.

“We don’t want to be given money; we are asking for training support to get ahead using our own skills and tools; for our areas to be reforested to create microclimates that buffer against the freezes; for the biodiversity to be preserved; and for organic farming to be fomented,” said Atencio.

Blanca Fernández, head of the Centro Flora Tristán’s rural development programme, told IPS that the state is not doing much to fight climate change. She said that while there are some initiatives in different regions, there is no national policy, let alone a gender perspective.

“The government has committed itself to include a focus on climate change and sustainable development in all of its development policies; we as civil society will be closely watching to make sure women and their organisations are included in the policies,” she said.

Tania Villafuerte, a provincial government authority in Cuzco, acknowledged that the state is still “blind, deaf and dumb” regarding climate change and that it has yet to face the challenge of “bringing policies down to earth, and rooting them in people’s lives.”

“This phenomenon does not affect everyone alike, it’s not neutral,” she said. “Women have to be protagonists in the process of taking care of natural resources because they have the ancestral knowledge that has made it possible to care for and preserve biodiversity, such as in the case of native seeds.”

Skills training among women farmers for the efficient use of water, improvement of soil and organic farming were key proposals presented by the five women who gave their testimony at the hearing. Another was the establishment of farm insurance that also covers women.

They also called for afforestation efforts in highlands areas, to generate microclimates to attenuate the freezes, as well as sustained policies to promote the conversation of biodiversity.

Rosa Montalvo, who commented on the women’s proposals at the hearing, said they were all viable, if gender policies complete with budgets are established, “taking into account the different impacts of climate change on men and women.”

“The ancestral knowledge of women farmers should also be recognised and strengthened with modern technologies, and enforcement of the laws and equal opportunity plans should be ensured at all levels of the state,” the gender expert said.