DURBAN, South Africa, Dec 6 2011 (IPS) - The United States has become the major stumbling block to progress at the mid point of negotiations over a new international climate regime say civil society and many of the 193 nations attending the United Nations climate change conference here in Durban. 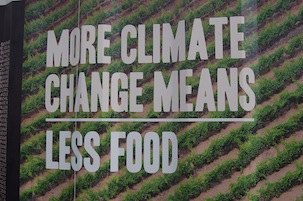 “The U.S. position leads us to three or four degrees Celsius of warming, which will be devastating for the poor of the world,” said Celine Charveriat of Oxfam International.

“They are proposing a 10-year time out with no new targets to lower emissions until after 2020,” Charveriat said.

At COP 15 in Copenhagen the U.S. committed to reducing its emissions 17 percent from 2005 by 2020. This is far short of what is widely agreed as necessary: cuts in fossil fuel emissions 25 to 40 percent below those in 1990 by U.S. and all developed nations.

Scientists have repeatedly warned that global emissions must peak by mid-decade and then decline every year thereafter. But U.S. negotiator Jon Pershing said their Copenhagen emission reduction pledge is sufficient until 2020.

“There is a huge failure of ambition. Nothing here will keep us out of catastrophic climate change,” said Jim Leape, Director General of the World Wide Fund for Nature International. The U.S. has already suffered record- breaking losses due to severe weather this year with only 0.8 degrees Celsius of warming, Leape said.

“If they (U.S.) won’t moderate this stance they should step aside,” Leape.

That sentiment was echoed by Greenpeace’s Kumi Naidoo who also said: “Delegates must listen to the people not to certain corporate interests.”

The Obama White House is betraying the American people, as well as the municipalities and companies in the U.S. who are taking serious action to reduce their emissions, Naidoo said.

Pa Ousman Jaru of The Gambia, a delegate representing the Least Developed Countries block, also asked the U.S. to step aside and stop blocking progress for the rest of the final week.

Jaru reiterated the developing world’s commitment to a second phase of the Kyoto Protocol after the first one expires in 2012. Under the Kyoto Protocol all industrialised nations, with the exception of the U.S., are legally bound to reduce emissions five percent from 1990 levels.

Canada’s emissions are close to 30 percent higher than in 1990 and said they will not participate in a second phase. Japan and Russia will also not participate leaving the Kyoto Protocol to regulate only about quarter of current global emissions.

There had been expectations that the Kyoto Protocol would die here in Durban but United Nations Framework Convention on Climate Change climate chief Christiana Figueres said it would live on.

Nadioo agreed that the Kyoto Protocol would live but it would be on “life support for the next two years” of additional negotiations.

Jaru said that the other “track” of negotiations to regulate and reduce the remaining 75 percent is vitally important and must result in ambitious reductions. That is the track the U.S. is reluctant to participate in beyond its Copenhagen commitments because China, the world’s largest carbon emitter, refused to agree to binding reductions for itself.

Now, for the first time China said it will agree, a move that Figueres called “very positive”. She said it was part of the progress being made in Durban, which she expected to escalate with the arrival of ministers for the high level negotiations beginning Tuesday.

Another major issue includes the establishment of a Green Climate Fund, which is to scale up to 100 billion dollars a year in funding to help developing countries adapt to climate change. That is bogged down in how to set up and structure the fund. The more difficult issue of where the money is going to come from is on the back burner.

There was progress on talks to reduce deforestation, a major source of emissions. The U.N. programme on Reducing Emissions from Deforestation and Forest Degradation in Developing Countries (REDD+) negotiation focused on thorny details of how to verify reductions with progress expected by end of the week. Decisions on financing for REDD+ have been postponed until COP 18 in Qatar next year.