Skyrocketing prison populations, largely the result of the failed "war on drugs" and "get tough on crime" policies, are no longer affordable for many states.

PORT LOUIS, Dec 27 2011 (IPS) - Mauritius plans to privatise its water sector, as rains become rare, and century-old pipes continue to leak almost 50 percent of the water available, added to waste by the population, mismanagement and over-consumption. 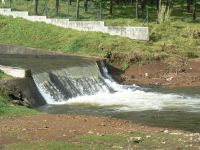 There are not enough dams to collect water in Mauritius, and most of the rainwater runs into the sea. Credit: Nasseem Ackbarally/IPS

“Water rates are cheap in Mauritius compared to other countries in the region despite the increase of 35 percent scheduled for January 2012,” Energy and Public Utilities Minister Rashid Beebeejaun observes, while calculating the bill an average family of four who consumes 20 m3 (20,000 litres) of potable water a month would pay. “Only MRs 150 (five dollars); just compare this figure with the price of tobacco.”

Presently, 10 m3 of water (10,000 litres) for domestic purposes costs the equivalent of 1.50 dollars, while commercial users pay the equivalent of 43 cents of a dollar for the first 100 m3, industrial consumers 34 cents, and the hotel industry 62 cents for the first 100 m3. The cost for treating and delivering one m3 of water is MRs 12.00 (41 cents), according to the Central Water Authority (CWA).

Prime Minister Navin Ramgoolam has admitted that there is a problem with the water supply in this Indian Ocean island nation, located 2,400 km off the southeast coast of Africa.

“We can have plenty of water, we haven’t planned properly. That is the problem,” he said. More than 99 percent of the population has access to piped water on their premises or within their homes.

Experts from the Singapore Public Utility Board are currently reviewing the functioning of the entire water sector on the island, both public and private, to improve delivery of services.

The water shortage is mainly due to leakages from the 100-year old pipes that have never been replaced, and have not been maintained for years due to lack of funds.

Thus, fully half of the water leaks before reaching the consumers, said Dev Aukle, acting general manager of the CWA.

The challenge is big, adds Beebeejaun, who has unveiled a government plan to replace part of the 2,000-km long network and build two more dams.

“Water rates would keep on increasing under private ownership. Currently, private operators are selling one litre of water for MRs 20 (69 cents). One can get 4,000 litres of potable water with this same amount from the public water sector. So, how can we accept privatisation?” he asks.

Demonstrating in front of the offices of the CWA earlier this month, Jayen Chellum, general secretary of the Consumers Association of Mauritius (ACIM), said neither a rise in rates nor privatisation is justified “since a good part of the population does not get enough water because of the leakages in the pipes.”

But Mauritians approve of the government’s decision to raise water rates on grounds of transparency and good governance, citing as examples the banking, insurance and financial services sector and the sugar industry that are well managed by private hands.

Riad Hulmuth, a resident of New Grove, in southern Mauritius, says political intervention has ruined all public bodies in Mauritius.

“Political nominees who do not possess any skills always head such bodies. They are paid huge wages and fringe benefits, cars and travel allowances. Had the water sector been managed by the private sector there would have been less wastage, good management and abundant water for all,” he says.

Kritanand Beeharry from the Mauritius Agricultural Marketing Cooperative Federation (MAMCF) said he has no problem with privatisation “if the rates stay the same.”

Nevertheless, he agrees with the increase in water rates for other purposes “as the government needs money to invest in infrastructure to bring water to every household. This is not an easy task because production costs are increasing,” he says.

But Prakash Bhuckory, a farmer from Nouvelle Découverte, a village in the centre of the island, is not happy. Increased water rates would affect the profitability of his 200-cow dairy enterprise.

“Fodder and other inputs in animal husbandry are not cheap and milk production is not that great. It’d be difficult to manage the farm if prices keep on increasing,” he said.

Mauritius gets about 2,100 mm of rain annually that are collected by 11 dams, 5 aquifers, 25 rivers and rivulets and 364 boreholes. But most of the rainwater runs into the sea because of the topography of this 1,862 square kilometre island, while the rest is shared by domestic users whose per capita consumption is 167 litres, while the national per capita consumption including industry and others stands at 221 litres.

Demand for water is increasing by 2.5 percent a year – with a 16 percent increase for domestic users, 62 percent for commercial, 44 percent for hotels and 32 percent for public institutions.

Meanwhile, some 360 water users, mostly sugar estates, hold century-old water rights that guarantee them plenty of water, at almost no cost, from rivers, canals and streams that pass or border their lands, under the Rivers and Canals Act dated 1863.

But Beebeejaun told IPS that all water resources belong to the state and water rights are licences to use water and not to own it.

“The water rights owners are using almost half of the water available on the island. We are looking seriously into that matter,” he said.

But the director of the Mauritius Sugar Producers Association (MSPA), Jean Li Yuen Fong, told IPS that the estates need this water for irrigation purposes as they cultivate sugar cane, vegetables and fruit.

“Without this water, it would be impossible for them to produce food,” he added, emphasising that the producers are conscious of the lack of water and to that effect are investing in new and efficient technologies.

Yuen Fong said if the government puts a price on the water they use from the rivers that are presently free of charge, it would definitely drive up production costs.

Salil Roy, manager of the Planters Reforms Association (PRA), claims producers will die if they are prevented from using water from the rivers. “On one hand, we are asked to produce more food and on the other, water is running to the sea. What’s wrong with using it?” he asks.