BERLIN, Dec 29 2011 (IPS) - For the last ten years, environmentalists and marine biologists have repeatedly warned that the world’s tuna populations, and particularly bluefin tuna, are being overfished to the verge of extinction. 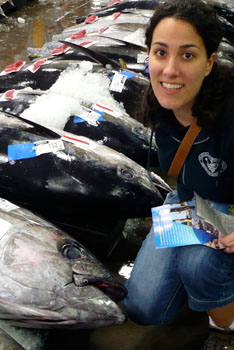 Added to this are criticisms of the systems for controlling tuna fishing, including the annual quotas authorised for each country and the means of monitoring them, handled by the International Commission for the Conservation of Atlantic Tunas (ICCAT).

These complaints led ICCAT to admit in November that the system for monitoring catches, which until now relied on a paper-based reporting system, is prone to fraud and misinformation, and will be replaced with an electronic documentation system that will be tested in 2012.

Now a team of Spanish and Canadian marine biologists, headed up by María José Juan Jordá, has confirmed the threat of the collapse of tuna populations, through an analysis of the global populations of 26 tunas and related fish species.

In a recently released study, Juan Jordá and her co-authors concluded that the steepest declines have taken place in two groups: the largest, longest-lived, highest-value temperate tunas and the smaller, short-lived mackerels.

In the case of both groups, most of their populations are being overexploited to the verge of extinction, according to the study “Global Population Trajectories of Tunas and Their Relatives”, published in early December in Proceedings of the National Academy of Sciences of the United States.

“There is no need to cut down on fish consumption,” but consumers need to be well informed and should support industries that promote sustainable fishing practices, said Juan Jordá, a researcher at Universidade da Coruña in Spain and Simon Fraser University in Canada.

Q: The conclusions of your study confirm the warnings that have been voiced for years by environmental organisations. Which species are most affected? A: Our work confirms that various populations of temperate tunas are being overexploited, including the Atlantic bluefin tuna (Thunnus thynnus) of the east, west and south Atlantic, and the albacore tuna (Thunnus alalunga) of the north Atlantic.

The current biomass of these species is at levels below what scientists consider to be safe, and rates of fishing mortality are higher than what is considered safe.

We also show that the majority of tropical tuna species are being “fully exploited.” In other words, the current levels of biomass and fishing mortality are “optimal” for most of these species.

I say optimal because the goal of the Regional Fisheries Management Organisations (RFMOs), including ICCAT, which are responsible for the management and conservation of fish species, is to reduce the biomass of their populations to “maximum sustainable yield” levels.

Q: What does that mean? A: When the biomass of a species is reduced by a certain proportion – depending on the species and its particular biology, normally around 50 or 60 percent – the population reaches its most productive level, the optimal level for maximising catches. Basically, the tropical tuna species are close to the limits of sustainability.

Q: What are the most commercially attractive species? A: We’ve estimated that the biomass of temperate tunas (three species of bluefin tuna and one of albacore) declined by an average of 80 percent between 1954 and 2006. The biomass of tropical tunas (bigeye, yellowfin and skipjack) decreased 60 percent in the same period.

Global tuna catches in 2008 totaled 4.2 million tons, of which 94% correspond to tropical species, and only six percent to catches of temperate tunas, according to the United Nations Food and Agriculture Organisation (FAO).

Most of these catches were by “relatively well” managed fisheries. However, there are problematic issues that urgently need to be addressed.

Q: Such as? A: With the growth in the world’s population, the demand for tuna and fishing activity has expanded. But neither the majority of fisheries nor their catches can continue growing, because tuna species are already “fully exploited” or “overexploited”.

One solution, which should be addressed by all of the RFMOs, is to reduce the number of boats and their capacity to take fish from the sea. Overexploited populations need recovery plans, and when plans do exist, like with the Atlantic bluefin tuna, it is essential that they be effective and enforced.

Other tools, such as listing species under the Convention on International Trade in Endangered Species of Wild Fauna and Flora, are also needed.

Q: Wouldn’t it also be necessary to change the way RFMOs determine “optimal” populations? A: Yes. The official goal of the RFMOs is to achieve the maximum sustainable yield. This is very easy in theory, but in practice it is very difficult to achieve, and even for scientists to estimate, because it requires good biological data on species and catches, which isn’t always available.

As a result, the reference levels estimated as targets for maximum sustainable yields are subject to a great deal of uncertainty. Therefore, the RFMOs should modify their goals and define new criteria, where there are limits set as reference points, in order to prevent overly low levels of biomass and overly high levels of mortality, and objective reference points, with safety margins.

Q: ICCAT has admitted that its system for the control of tuna fishing is ineffective and has pledged to reform it. Do you think that the countries involved have the political will to cut back on fishing and fish consumption? A: ICCAT took a very positive step in deciding to adopt an electronic system for documenting catches. But this step must be fulfilled, and high-quality, accurate data must be provided. This requires the cooperation of all of the countries involved in these fisheries.

This will mean short-term sacrifices, with medium- and long-term benefits, because if fishing is managed well and populations are recovered, it is good for the fishing industry, for fish populations, and for consumers.

Q: And what would be the ideal attitude on the part of consumers? A: There is no need to cut down on fish consumption in general, but we need good information, good product labeling, and to support industries that have adopted sustainable fishing practices and ecolabels, like those promoted by the Marine Stewardship Council.