MOGADISHU, Dec 30 2011 (IPS) - With vehicles and donkey carts packed with their belongings, Somalis are returning, four years after they fled, to their partially standing, bullet-scarred and mortar-shelled neighbourhoods in former Al-Shabaab controlled areas of Mogadishu. 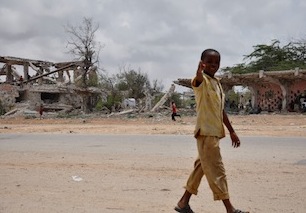 A Somali youngster walks past a ruined building in Hodon district in Mogadishu. Credit: Abdurrahman Warsameh/IPS.

With much of the Somali capital now under the control of government forces backed by African Union troops, most of the city’s residents have returned to their ruined homes after the surprise withdrawal of the extremists in August. Despite security incidents in the city, a semblance of normalcy has returned here.

Residents have now begun the slow process of rebuilding their homes and their lives. While most have been weary of returning to former Al-Shabaab controlled areas, a brave few have dared to return to their ruined neighborhoods intent on a new beginning. There are, however, no official figures of how many people have returned to date.

Many have had to endure years of hardship in squalid conditions in makeshift shelters on the outskirts of the city.

Maryan Guled, a mother of five, has lived with her husband and children in the Elasha camp on the outskirts of Mogadishu since 2008.

The family has now returned to their neighbourhood in Hodan district where they used to live in a villa in the midst of a close-knit community. However, their home was completely gutted during the three- year conflict for control of the city.

Her family had been forced to flee their home after Guled’s sister was killed when a stray bullet entered their home.

“Things began to fall apart when all of a sudden our neighbourhood became the target of blanket bombing and shooting back in 2008. My sister and many of my neighbours, who we were very close to, died in front of my eyes. We had to flee with our lives with nothing else,” said Guled as she swept the yard of her ruined villa.

Guled says the family does not know how they will pay for the repairs.

The Somali Transitional Federal Government, which is bankrolled by the United Nations and donor countries, has been unable to financially assist people rebuild their homes. And aid agencies remain busy helping those displaced by the famine to return to their homes in southern Somalia.

But security challenges persist for the returnees. Hundreds of unexploded bombs, planted by Al- Shabaab to prevent Somali government forces and African Union peacekeepers from taking control of these areas, remain scattered throughout the areas vacated by the Islamist rebels.

Somali government officials have warned returning residents of the presence of the explosives, which have so far claimed the lives of a number of people and injured dozens more.

Returnees to the city have also complained that under-paid Somali government soldiers have been a security threat. They have been accused of murder, rape, looting and robbery.

The government imposed a state of emergency in former Islamist-occupied areas, while the military has court martialed a number of soldiers after they were convicted of rape and looting.

Some were sentenced to death for murdering civilians, while others were given jail sentences for petty crimes. In recent weeks the incidences of crime have decreased.

But schools and markets are slowing reopening in Mogadishu, while the local government is repairing the main street in the heart of the city. Street lighting in some districts has been repaired, streets have been cleaned and garbage collected.

However, most services remain largely non-existent as only private companies supply running water and electricity to residents. Hospitals in Islamist-vacated areas have been destroyed and remain closed.

Dahir Kulmiye and his family of five returned to their partially destroyed home in Hodon soon after the rebels fled the city in August.

He says that water and electricity has been a major problem for the returnees, but local companies are trying their best to kick-start services.

The state utility company was destroyed during the country’s two-decade civil war. So small, local and privately run companies provide services for those who can afford them.

“Lack of a clean water supply is another big problem for us since we returned here a month ago. The power company has restored electricity in many homes and we expect to get it in our home soon,” Kulmiye told IPS.

He added that his children had to attend a school far from their home because the nearby one remained closed, as it required major repairs.

Mohamed Hallane says his family wants to live in their home again. It is situated in Hawlwadag district in the south of Mogadishu, an area that was once an Al-Shabaab stronghold. But Hallane’s home was hit by mortar shells and is in need of major repairs before he can move back.

“I checked on my home. The areas are secure but almost every home in our neighborhood has been hit by shells, and bullets scars are everywhere,” Hallane told IPS.

As returnees work at rebuilding their lives, they have also found time to enjoy life. Residents in the capital have, for the first time, started visiting the city’s beaches to relax as the security in the capital gradually improves. Hundreds of residents flocked to Mogadishu’s Lido Beach over the Christmas weekend.